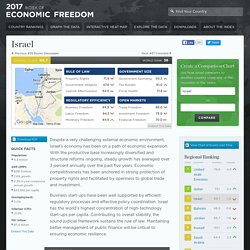 With the productive base increasingly diversified and structural reforms ongoing, steady growth has averaged over 3 percent annually over the past five years. Economic competitiveness has been anchored in strong protection of property rights and facilitated by openness to global trade and investment. Business start-ups have been well supported by efficient regulatory processes and effective policy coordination. Close Background Israel gained independence in 1948, and its vibrant democracy remains unique in the region. Rule of LawView Methodology Government SizeView Methodology The top personal income tax rate is 48 percent. Israel. Israel's religious divisions run deep, survey shows.

When combined with previous Pew surveys of American Jews and Middle Easterners, the study provides a pessimistic picture of global attitudes toward the Israeli-Palestinian peace process. 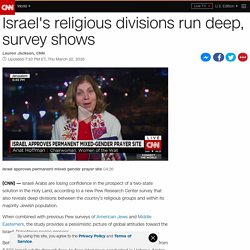 Between October 2014 and May 2015, Pew researchers collected responses from 5,601 Israeli adults through face-to-face interviews conducted in Hebrew, Arabic and Russian. The extensive fieldwork required for the survey aimed to capture responses from the varied socioeconomic strata of Israel's 8.5 million population. The margin of error for this survey is 3% for Israeli Jews, but higher among Christian, Muslim and Druze subgroups, a minority comprising roughly one-fifth of the Israeli population.

In 2013, Israeli Arabs were strikingly optimistic that a two-state solution was possible, a survey of attitudes across six countries and the Palestinian territories revealed. Nearly 75% of Israeli Arabs said they believed Israel and an independent Palestinian state could peacefully coexist. Religion and state in Israel: What do American Jews think? - Diaspora. Log In - New York Times. The Land of Israel. The Promised Land The history of the Jewish people begins with Abraham, and the story of Abraham begins when G-d tells him to leave his homeland, promising Abraham and his descendants a new home in the land of Canaan. 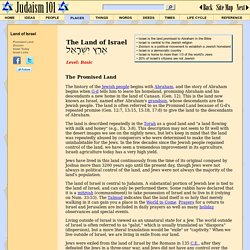 (Gen. 12). How does Israel's parliament work? Its 120 seats -- up for grabs in the March 17 election -- are split up between the various political parties running in the election. 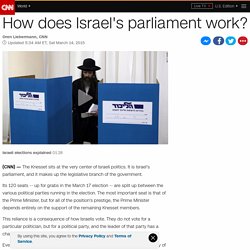 The most important seat is that of the Prime Minister, but for all of the position's prestige, the Prime Minister depends entirely on the support of the remaining Knesset members. This reliance is a consequence of how Israelis vote. They do not vote for a particular politician, but for a political party, and the leader of that party has a chance to become the next Prime Minister. Even the most successful party will not bring in enough votes to win a majority of the Knesset seats. Israel's Political System. Authors: Eben Kaplan, and Caroline Friedman Updated: February 11, 2009 This publication is now archived. 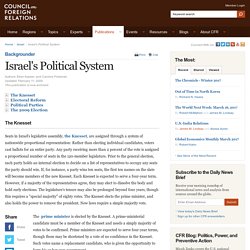 The Knesset Seats in Israel's legislative assembly, the Knesset, are assigned through a system of nationwide proportional representation: Rather than electing individual candidates, voters cast ballots for an entire party. Israel Guide: Government and politics, How religion affects Israeli politics: Israel is a secular democracy. The Economist explains: The evolution of Israeli politics. GOLDA MEIR, the former Israeli prime minister, once told the American president, Richard Nixon: “You are the president of 150 million Americans; I am the prime minister of six million prime ministers.” 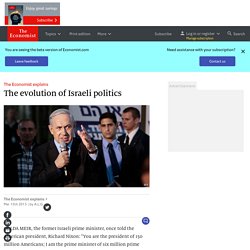 Israel’s politics have long been a kaleidoscope of parties split along ideological, ethnic and religious lines. Yet the latest opinion polls suggest that a parliamentary election on March 17th may leave the Knesset as fractured as ever. Eleven parties are likely to gain seats. Even a grand coalition of the rivals Likud and Zionist Union, the two largest factions, would be unable to secure a majority. How did Israeli politics become so tangled? Parties have splintered, merged and changed names since the birth of the Jewish state. Israeli political parties often revolve around charismatic figures. This is aggravated by the electoral system. That said, some rightists have moved leftward, embracing the idea that Israel cannot forever hold on to a growing and restive Palestinian population. Israel country profile. A densely-populated country on the eastern shore of the Mediterranean Sea, Israel is the only state in the world with a majority Jewish population. 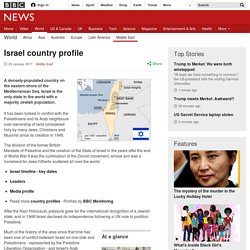 It has been locked in conflict with the Palestinians and its Arab neighbours over ownership of land considered holy by many Jews, Christians and Muslims since its creation in 1948. The World Factbook. Facts, History, & Map. Israel. The Dead Sea is drying out. The Dead Sea, a salt lake nestled by Israel, Jordan and the West Bank, is shrinking at an alarming rate -- about 3.3 feet per year, according to the environmentalist group EcoPeace Middle East. 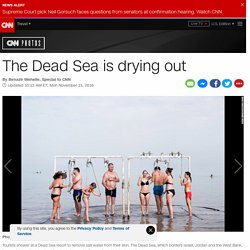 And human actions are largely to blame. "It's not just like one country is punishing the Dead Sea; it's more like the whole region," said photographer Moritz Küstner, who visited the area in February to work on his series "The Dying Dead Sea. "