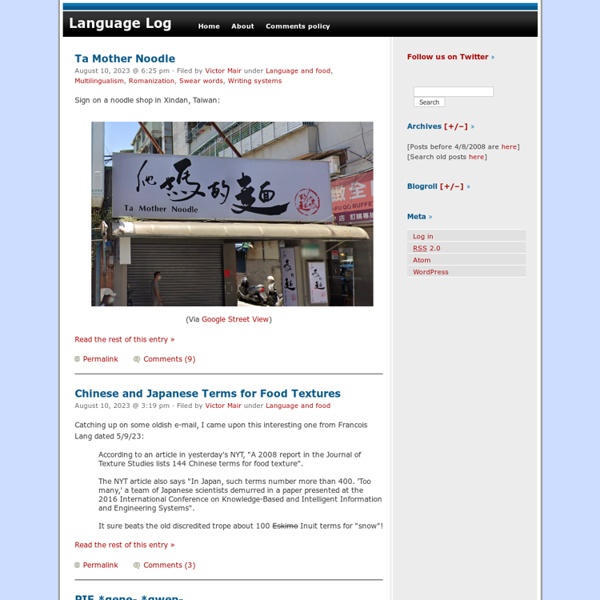 An important rallying cry and usage distinction made by allies of undocumented workers in the current cultural battle over immigration in the United States is Elie Wiesel's assertion above: "No human being is illegal." In the quote, Wiesel gives examples of the kinds of adjectives that he feels can denote properties of people (fat, skinny, beautiful, right, and wrong). On the other hand, calling a person 'illegal', he says, is a contradiction in terms. Here's a more elaborated statement of the idea, quoted from this website When one refers to an immigrant as an "illegal alien," they are using the term as a noun. They are effectively saying that the individual, as opposed to any actions that the individual has taken, is illegal. What are the linguistic underpinnings of the intuition that using the term illegal alien implies that a person's existence is illegal? Read the rest of this entry »

languagehat.com 15 Massive Online Databases You Should Know About Advertisement Think of your favorite open databases. I’m sure Wikipedia and IMDb instantly spring to mind, but you might not be in the need of all that knowledge ever, or a comprehensive database of all things entertainment. Sometimes you need a bit of VLDB (Very Large Data Base) flavor. Something to spice up your data analysis. Here are 15 massive online databases you can access and analyze for free, or just peruse at your leisure. 1000 Genomes The 2003 completion of the Human Genome Project (HGP) was just the beginning. You can download part of the 1000 Genomes Project, containing sequencing information for over 2,600 people from 26 populations around the world. See also: The Animal Genome Size Database for genome data relating to 5635 species. Airliners The planespotters heaven. Airliners also features an extensive aircraft data and history section always kept updated in cooperation with Aerospace Publications to ensure factual accuracy. The Internet Archive Freebase Find a Grave CiteSeerX

the limping messenger Evolving English II I Made A Linguistics Professor Listen To A Blink-182 Song And Analyze The Accent Blink-182 at the Whiskey in Los Angeles in 1996. (Photo: Daniel D'Auria/WikiCommons CC BY-SA 2.0) Two decades have passed since pop-punk exploded in the American music scene, yet the quintessentially suburban, teen-centric music still seems to bounce around our collective skulls. Of all the elements of the Clinton-era mutation of punk music that embraced skate and surf culture, mild angst, goofiness, and incredibly hooky, catchy music, it's the vocals that we remember. The very specific accent used in the mega-hits of the genre seems to still have a hold over anyone who was a teenager between 1993 and 2003: On Twitter you’ll see jokes made about the “pop punk voice" used by bands like the Offspring, New Found Glory, Avril Lavigne, and, especially, Blink-182. There's a whole Tumblr called Tom DeLonge Lyrics, dedicated to transliterating the spectacularly strange and exaggerated accent used by DeLonge, one of the singers of pop-punk band Blink-182. What's going on here?

Footnotes to History- by James L. Erwin A message to my readers: I recently passed the 50,000 hit mark. In the last few months, FtH has been mentioned by PC Magazine, Reason, the Progressive Review, and the National Review. The box above will allow you to contribute to the Footnotes project, by freeing up some of my time and allowing me to purchase new research materials. Your interest is what keeps me interested. Your help will help me make Footnotes better. Just click on the button above to send me a bit of cash through Amazon.com. Thanks again! All material ©1998-2003 by James L. The Lousy Linguist Can An Algorithm Do The Job Of A Historian - BuzzFeed News

- Bob is the Oil Guy