Distributed Amine Modulation of Graded Chemical Transmission in the Pyloric Network of the Lobster Stomatogastric Ganglion - PubMed. Know Your Neurons: How to Classify Different Types of Neurons in the Brain’s Forest. Previously, on Know Your Neurons:Chapter 1: The Discovery and Naming of the Neuron Chapter 2: How to Classify Different Types of Neurons, or The Dendrology of the Neuron Forest Scientists have organized the cells that make up the nervous system into two broad groups: neurons, which are the primary signaling cells, and glia, which support neurons in various ways. 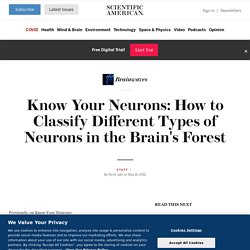 The human brain contains around 100 billion neurons and, by most estimates, somewhere between 10 to 50 times as many glial cells. All these cells are packed into a three-pound organ about the size of both your fists stuck together. You can think of your brain as a dense forest—the neuron forest—in which different kinds of trees grow near, around and on top of one another, their branches and roots intertwining. Different Types of Neurons (click to enlarge). A model neuron. Before exploring the brain’s cellular diversity, let’s look at a model neuron. 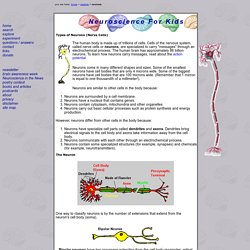 Cells of the nervous system, called nerve cells or neurons, are specialized to carry "messages" through an electrochemical process. The human brain has approximately 100 billion neurons. To learn how neurons carry messages, read about the action potential. Neurons come in many different shapes and sizes. Synaptic transmission Animation. Neurons, Synapses, Action Potentials, and Neurotransmission - The Mind Project.

Function of neurons Because our main interest lies in exploring how information processing occurs in the brain, we are going to ignore glia. 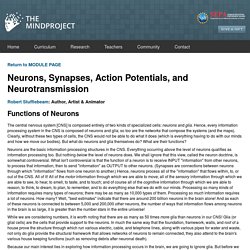 But before we see how neurons process information (and what that means), you need to know a few things about the structure of neurons. Structure of neurons While there are as many as 10,000 specific types of neurons in the human brain, generally speaking, there are three kinds of neurons: motor neurons (for conveying motor information), sensory neurons (for conveying sensory information), and interneurons (which convey information between different types of neurons). The following image identifies how neurons come in various shapes and sizes. Neuronal signaling Conduction Neurotransmission. Cell Signals. Home DNA Learning Center Preparing students and families to thrive in the gene age 3-D Animation Library Cell Signals Journey inside a cell as you follow proteins and learn about cellular interactions. 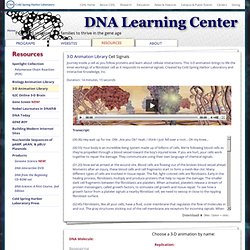 This 3-D animation brings to life the inner workings of a fibroblast cell as it responds to external signals. Duration: 14 minutes, 15 seconds Transcript: (00:36) Hey wait up for me. . (00:55) Your body is an incredible living system made up of billions of cells. . (01:20) Now we've arrived at the wound site. . (02:45) Fibroblasts, like all your cells, have a fluid, outer membrane that regulates the flow of molecules in and out. . (03:46) Beneath the cell membrane, you see the grey receptor ends surrounded by pink fibers – these structures help to give the cell its shape – and a range of messenger proteins that will carry the signal through the cytoplasm. . (04:25) Now we'll watch the action again from our position in the cell's cytoplasm. Download Choose a 3-D animation by name: Student Summer Camps. Dopaminergic Synapses. Dopamine Pathways. How Drugs Work 2/3 - Ecstasy (BBC Three) HUMAN NEUROANATOMY. Models. Neuroanatomy. Most neuroscience writing touts statements like 'the human brain is the most complex object in the universe'. 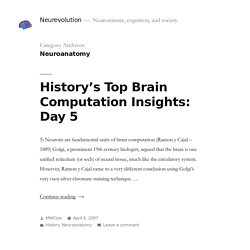 This serves only to paint the brain as a mysterious, seemingly unknowable structure. This is somehow comforting to some, but it's not for me. I want to understand this thing! Here are some facts to demystify the brain (most points courtesy of Dave Touretzky and Christopher Cherniak): The brain is very complex, but not infinitely so A few spoonfuls of yogurt contain 1011 lactobaccillus bacteria: ten times the number of cortical neurons in a human brain There are roughly 1013 synapses in cortex. What to take from all this? Of course, if the brain is so limited, how can we expect our brains to be up to the task of understanding it? We can, and we will. This shows that we have what it takes to understand ourselves in the deepest way possible: by learning the neural mechanisms that make us who and what we are. The human brain in numbers: a linearly scaled-up primate brain. The Human Brain as a Special Brain What makes us human? 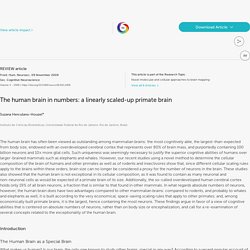 Is our brain, the only one known to study other brains, special in any way? According to a recent popular account of what makes us unique, “we have brains that are bigger than expected for an ape, we have a neocortex that is three times bigger than predicted for our body size, we have some areas of the neocortex and the cerebellum that are larger than expected, we have more white matter” – and the list goes on (Gazzaniga, 2008 ). Most specialists seem to agree (for example, Marino, 1998 ; Rilling, 2006 ; Sherwood et al., 2006 ). The nervous system. Katerina Semendeferi - Faculty Neurograd Program - UC San Diego Health Sciences. Van Hoesen, G.W., Morecraft, R.J. and Semendeferi, K. (1996) Functional neuroanatomy of the limbic system and prefrontal cortex. 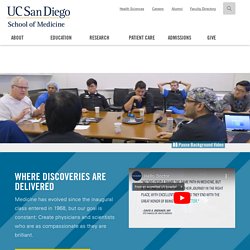 Ksemende@ucsd.edu Selected Publications Katerina Semendeferi is a Professor in the Department of Anthropology and the Neuroscience Graduate Program at UCSD. 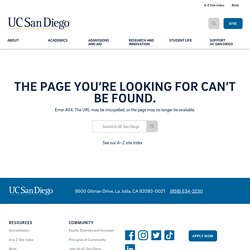 The Brain—Information about the Brain. 1 Introduction “I think, therefore I am.” 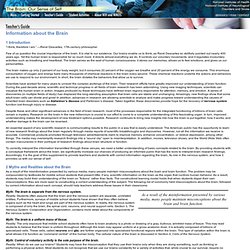 —René Descartes, 17th-century philosopher Few of us question the crucial importance of the brain. It is vital to our existence. Our brains enable us to think, as René Descartes so skillfully pointed out nearly 400 years ago. Neurogenetics at UT Health Science Center. How an animal senses, perceives, and acts depends on the organization and number of elements that make up its nervous system. 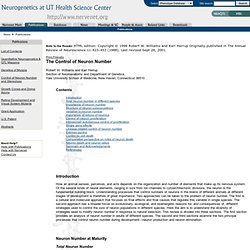 Of the several kinds of neural elements, ranging in size from ion channels to cytoarchitectonic divisions, the neuron is the fundamental building block. Understanding processes that control numbers of neurons in the brains of different animals at different stages of development is therefore of great importance. Two approaches can be taken to the problem of neuron number. The first is a cellular and molecular approach that focuses on final effects and final causes that regulate this variable in single species.