The reasons for our left or right-handedness - Newsportal - Ruhr-Universität Bochum. It is not the brain that determines if people are right or left-handed, but the spinal cord. 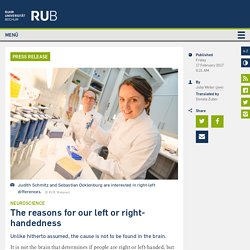 This has been inferred from the research results compiled by a team headed by private lecturer Dr Sebastian Ocklenburg, Judith Schmitz, and Prof Dr H. C. Onur Güntürkün. Together with colleagues from the Netherlands and from South Africa, the biopsychologists at Ruhr-Universität Bochum have demonstrated that gene activity in the spinal cord is asymmetrical already in the womb. A preference for the left or the right hand might be traced back to that asymmetry. “These results fundamentally change our understanding of the cause of hemispheric asymmetries,” conclude the authors. Hemispheric Asymmetries: The Comparative View. Introduction The two hemispheres of the human brain are not equivalent. 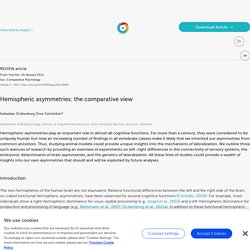 Relative functional differences between the left and the right side of the brain, so-called functional hemispheric asymmetries, have been observed for several cognitive functions (Corballis, 2009). For example, most individuals show a right-hemispheric dominance for visuo-spatial processing (e.g., Vogel et al., 2003) and a left-hemispheric dominance for production and processing of language (e.g., Bethmann et al., 2007; Ocklenburg et al., 2011a). PNAS 1996 Haxby 922 7. Opposite hemispheric lateralization effects during speaking... : NeuroReport.

Aside from spoken language, singing represents a second mode of acoustic (auditory-vocal) communication in humans. 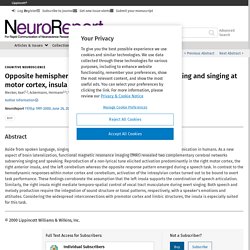 As a new aspect of brain lateralization, functional magnetic resonance imaging (fMRI) revealed two complementary cerebral networks subserving singing and speaking. Reproduction of a non-lyrical tune elicited activation predominantly in the right motor cortex, the right anterior insula, and the left cerebellum whereas the opposite response pattern emerged during a speech task. In contrast to the hemodynamic responses within motor cortex and cerebellum, activation of the intrasylvian cortex turned out to be bound to overt task performance. Music and language side by side in the brain: a PET study of the generation of melodies and sentences - Brown - 2006 - European Journal of Neuroscience. The right cerebral hemisphere: emotion, music, visual-spatial skills, body-image, dreams, and awareness. Opposite hemispheric lateralization effects during speaking... : NeuroReport. 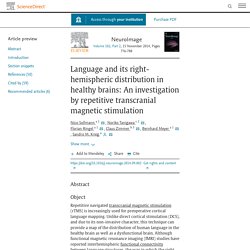 Functional MRI of language lateralization during development in children. 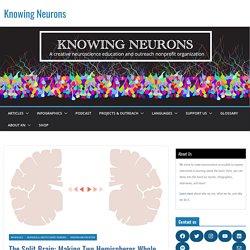 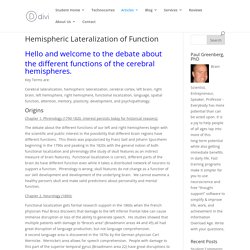 Origins Chapter 1, Phrenology (1790-1820, interest persists today for historical reasons): The debate about the different functions of our left and right hemispheres begin with the scientific and public interest in the possibility that different brain regions have different functions. This thesis was popularized by Franz Gall and Johann Spurzheim beginning in the 1790s and peaking in the 1820s with the general notion of both functional localization and phrenology (the study of skull features as an indirect measure of brain features). Anki - friendly, intelligent flashcards. < Back2.40MB. 0 audio & 29 images. 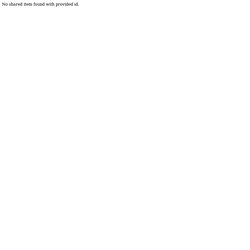 Updated 2014-09-18. Description Gross Anatomy test 2 deck PCOM 2014 Includes all lectures Sample (from 255 notes) Cards are customizable! Download. Lateralization and cognitive systems. Lateralization of brain and behavior in both humans and non-human animals is a topic that has fascinated neuroscientists since its initial discovery in the mid of the nineteenth century (Broca, 1861; Dax, 1865; Oppenheimer, 1977; Ströckens et al., 2013). 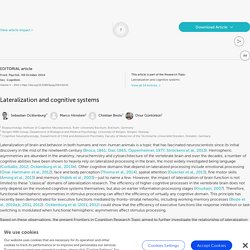 Hemispheric asymmetries are abundant in the anatomy, neurochemistry and cytoarchitecture of the vertebrate brain and over the decades, a number of cognitive abilities have been shown to heavily rely on lateralized processing in the brain, the most widely investigated being language (Corballis, 2012; Ocklenburg et al., 2013b). Other cognitive domains that depend on lateralized processing include emotional processing (Önal-Hartmann et al., 2012), face and body perception (Thoma et al., 2014), spatial attention (Duecker et al., 2013), fine motor skills (Arning et al., 2013) and memory (Habib et al., 2003)—just to name a few. Conflict of Interest Statement References. Neuroscience & Biobehavioral Reviews. Right Vs. Left Brain Theory. Two distinct forms of functional lateralization in the human brain. Author Affiliations Edited by Geoffrey K. 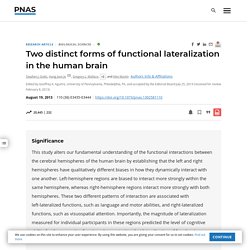 Cortical lateralization. Structural Asymmetries in the Human Brain: a Voxel-based Statistical Analysis of 142 MRI Scans. + Author Affiliations Abstract The use of computational approaches in the analysis of highresolution magnetic resonance images (MRI) of the human brain provides a powerful tool for in vivo studies of brain anatomy. 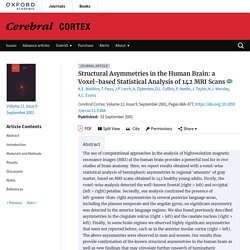 Here, we report results obtained with a voxel-wise statistical analysis of hemispheric asymmetries in regional ‘amounts’ of gray matter, based on MRI scans obtained in 142 healthy young adults. RSA Animate - The Divided Brain. The Split Brain: Making Two Hemispheres Whole. THE BRAIN FROM TOP TO BOTTOM. The process of identifying the parts of the brain that are involved in language began in 1861, when Paul Broca, a French neurosurgeon, examined the brain of a recently deceased patient who had had an unusual disorder. Though he had been able to understand spoken language and did not have any motor impairments of the mouth or tongue that might have affected his ability to speak, he could neither speak a complete sentence nor express his thoughts in writing.

A major issue of the topic of higher cortical function is the degree to which mental and cognitive functions are located in specific brain regions. We begin by looking at the neuroscience of language. Language is one of the most elaborate cognitive behaviors.