How Oxfam India changed lives in 2019. In 2019, Oxfam India through its various interventions reached directly to 6.32 lakhs marginalised persons from Dalit, Muslim, Tribal and other communities in 1,724 villages of our focus states. 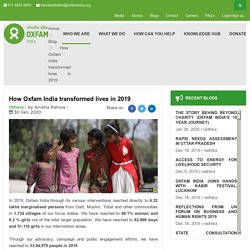 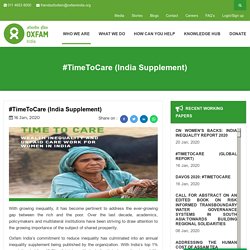 Over the last decade, academics, policymakers and multilateral institutions have been striving to draw attention to the growing importance of the subject of shared prosperity. Oxfam India’s commitment to reduce inequality has culminated into an annual inequality supplement being published by the organization. Women Representation in Political Decision Making: A Catalyst to achieving Gender Equality.

It is globally acknowledged that ‘gender equality and women’s empowerment’ are at the core of achieving development objectives, fundamental for the realisation of human rights, and key to effective and sustainable development outcomes. 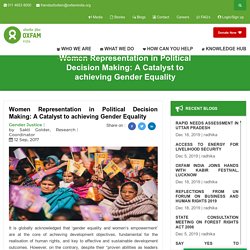 However, on the contrary, despite their “proven abilities as leaders and agents of change”, from the local to the global level, women’s leadership and political participation is restricted. The 2011 UN General Assembly resolution on women’s political participation reiterated that “women in every part of the world continue to be largely marginalised from the political sphere, often as a result of discriminatory laws, practices, attitudes and gender stereotypes, low levels of education, lack of access to health care, and the disproportionate effect of poverty on women.” Globally, several international commitments have been made, for achieving gender equality and these have emphasized on enhancing women’s representation in political sphere.

. • Indira Gandhi. Inequality in India - What is Inequality? Every year, before the Annual World Economic Forum at Davos, Oxfam International releases its annual inequality report. Each report looks to capture a different dimension of inequality (like the 2019 report titled “Public good or Private Wealth?”)

But fundamentally revolves around the various forms of inequality that have now become ubiquitous. It is in light of this that we first look at what inequality means and what its impacts are on our day to day life. What is inequality? The Cambridge dictionary describes inequality as “the unfair situation in society when some people have more opportunities, etc. than other people”. Violence as an Effective Mode of “Indian” Communication.

Violence as an Effective Mode of “Indian” Communication. 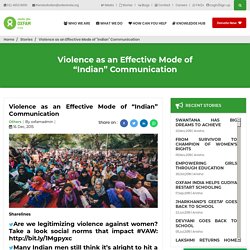 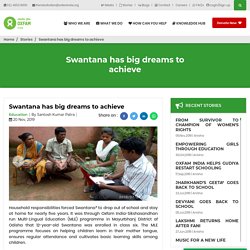 It was through Oxfam India-Sikshasandhan run Multi-Lingual Education (MLE) programme in Mayurbhanj District of Odisha that 12-year-old Swantana was enrolled in class six. The MLE programme focuses on helping children learn in their mother tongue, ensures regular attendance and cultivates basic learning skills among children. Swantana’s parents separated when she was three-years-old; she started living with her mother. Five Charities Working For Women. Anyone who has experienced even a subtle form of discrimination or bias knows what patriarchy is. 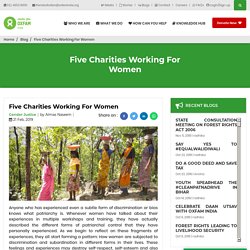 Whenever women have talked about their experiences in multiple workshops and training, they have actually described the different forms of patriarchal control that they have personally experienced. As we begin to reflect on these fragments of experiences, they all start forming a pattern: How women are subjected to discrimination and subordination in different forms in their lives. These feelings and experiences may destroy self-respect, self-esteem and also may set limits on their aspirations.

Inequality through my lens. Mallika Singhee is a freelance photographer whose work oscillates between event photography and photojournalism. 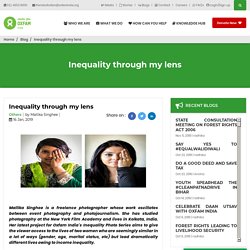 She has studied photography at the New York Film Academy and lives in Kolkata, India. Her latest project for Oxfam India's Inequality Photo Series aims to give the viewer access to the lives of two women who are seemingly similar in a lot of ways (gender, age, marital status, etc) but lead dramatically different lives owing to income inequality. From Survivor to Champion of Women’s Rights. From Survivor to Champion of Women’s Rights Though married as a child and facing domestic violence, 33 year old Hira Devi of Jharkhand’s Silda village never thought it was a problem. 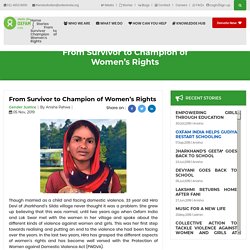 She grew up believing that this was normal, until two years ago when Oxfam India and Lok Swar met with the women in her village and spoke about the different kinds of violence against women and girls. This was her first step towards realising and putting an end to the violence she had been facing over the years. 10 Women-led protests that shook the world in 2019. The avid social media user in India would have definitely come across the brilliantly shocking images of the Indian map lighting up to the #MeToo movement. 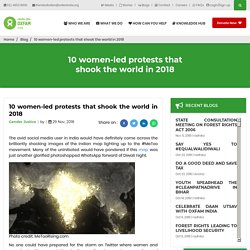 Many of the uninitiated would have pondered if this map was just another glorified photoshopped WhatsApp forward of Diwali night. No one could have prepared for the storm on Twitter where women and sexual minorities were taking to the medium to report cases of sexual harassment, violence and trauma. India’s #MeToo moment was an awakening for many to talk about and wipe the dust off the unreported, the invisible cases of Violence Against Women and Girls (VAWG). The movement renewed conversations on consent, sexual harassment, safety at the workplace, intimate partner violence, but shook age old patriarchal foundations that exist in our offices, our academic institutions, public spaces and homes. But beyond the digitalscape, this year also witnessed many lesser known global protests led by women that demand the world’s attention. 7 Frequently asked questions about Oxfam’s Inequality report. Oxfam’s new inequality report, which reveals that billionaires’ fortunes grew by $2.5 billion a day last year, as the poorest half of humanity – 3.8 billion people – saw their wealth fall, is making headlines around the globe. 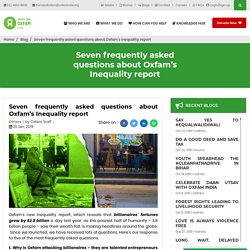 Since we launched, we have received lots of questions. Here’s our response to five of the most frequently asked questions. 1. Why is Oxfam attacking billionaires – they are talented entrepreneurs who create jobs and wealth. Billionaires such as Bill Gates have even given millions to charity. Oxfam is not anti-wealth but anti-poverty. Say yes to #EqualWaliDiwali. Dussehra, Dhanteras, and Diwali constitute the most awaited festive season in India. Marking new beginnings and celebrating the triumph of good over evil and light over darkness, it is often associated with exchanging gifts, wearing new clothes, and feasting together with your loved ones. While houses are decorated with lights, candles, and traditional earthen diyas on the outside, on the inside, this festive season is mostly accompanied by ceremonial gambling with friends, family, and relatives.

The Diwali Season is a source of boundless joy and happiness for the privileged like us. Unfortunately, for the underprivileged, it is just another time of the year. Socio-economic gaps between the rich and poor have increased drastically over the years, leaving them with very little or no means to make their ends meet, let alone celebrate a festival like we do. Love is always violence free. Gender Justice. Code on Wages lacks clear policy outcome. India is recognised to be one of the first developing countries to have introduced minimum wage policies through the Minimum Wages Act in 1948. Several more Bills and Acts contributed to refining the policies aimed at wage workers.

However, due to diverse socio-economic conditions across several states, the implementation process was complicated and led to the existence of 1709 rates in India. The Code on Wages 2019 (Bill No. 184) introduced in the Lok Sabha by the Minister of Labour, Mr. Santosh Gangwar, acts as a ray of hope for the 195 million wage workers in India. The Bill seeks to regulate wage and bonus payments in all employment where any activity of trade, business or manufacturing is carried out. The Code on Wages subsumes four previously existing laws: the Payment of Wages Act (1936), Minimum Wages Act (1984), Payment of Bonus Act (1965), and, Equal Remuneration Act (1976).

Unpaid care work in India. As per the 1998-99 National Time-Use Survey, weekly average time spent by men and women on total work (both paid and unpaid) in India is 48 hours and 62 hours respectively. Women therefore spend 28% more time on work than men do overall. They spend nine hours per day on work as opposed to 6.8 hours by men. Unpaid care work constitutes for about 35% of India’s GDP and is equivalent to about 182% of the total government tax revenue (ActionAid, 2017).

Currently, Indian women’s contribution to the GDP is 17%; this is not only far below the average 37% but is also less than that of China (41%) and sub-Saharan Africa (39%). Globally, women spend three times more time on unpaid care work than men. The problem of unpaid care work exists predominantly because of the many prevalent patriarchal norms in our society. What to do?

Oxfamindia. United Voices against Alcoholism. United Voices against Alcoholism Share on : This is the story of Kandhamal District, Gunjigaon, Odisha where Oxfam India's partner ISD is working with a women's group. A champion of change. Everything you must know about Oxfam India's fight against inequality. As widespread inequality becomes pandemic, stringent action to address and curb the gap between the rich and poor becomes impertinent. Interview: Women’s Reservation Bill is the path to ensure Gender Equality in India. Q1.