Hebrew Letters, Gesture and Language: Index. PUBLISHED ARTICLES ON LANGUAGE AND GESTURE (update 1999-2000) Considerable research has been done on the subject of the gestural origins of language in the three years since we first published these Hebrew alphabet gestures. 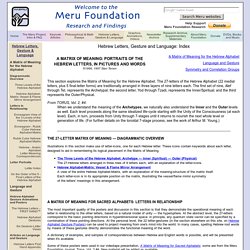 For those interested in this research, the articles below are highly recommended. Excerpts from Why People Gesture When they Speak, ©1998 by Iverson and Goldin-Meadow (Reprinted with authors' permission. Complete article published in Nature, November 19, 1998) Research shows that persons blind from birth gesture while speaking in the same manner and using the same range of gestures as do sighted persons -- even when speaking with another blind person. Sepher Raziel HaMalach. Blessed are the wise by the mysteries coming from the wisdom. 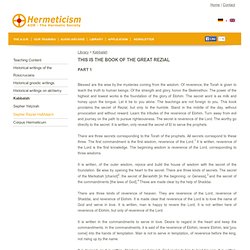 Of reverence, the Torah is given to teach the truth to human beings. Of the strength and glory, honor the Skekinethov. The power of the highest and lowest works is the foundation of the glory of Elohim. The secret word is as milk and honey upon the tongue. Let it be to you alone. Adam Kadmon – The First Man. In the religious writings of Kabbalah, Adam Kadmon is a phrase meaning “Primal Man”. 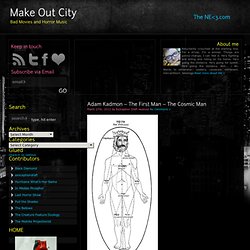 The oldest rabbinical source for the term “Adam ha-? Admoni” is Num. R. x., where Adam is styled, not as usually, “Ha-Rishon” (the first), “Ha-Kadmoni” (the original). It is said that Adam ? Admon had rays of light projecting from his eyes. Adam ? The various philosophical views concerning the Primal Man are, in spite of their differences, intimately related, being a compound of widespread mythology, Greek philosophy, and rabbinical theology. Torus, Adam Kadmon & Tree of Life. Sepher Yetzirah. 1. 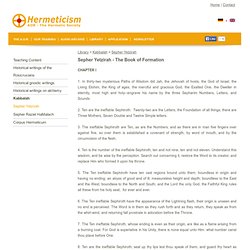 Qabalah Basics. Kabbala 101. The Key to the True Kabbalah by Franz Bardon. Kabbalah.com. When the sun is set and the stars decorate the heavens, part of our soul leaves our body. 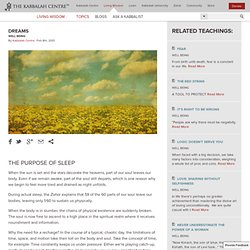 Even if we remain awake, part of the soul still departs, which is one reason why we begin to feel more tired and drained as night unfolds. During actual sleep, the Zohar explains that 59 of the 60 parts of our soul leave our bodies, leaving only 1/60 to sustain us physically. When the body is in slumber, the chains of physical existence are suddenly broken. The soul is now free to ascend to a high place in the spiritual realm where it receives nourishment and information. Why the need for a recharge? During our "metaphysical tune-up," the soul is in a realm beyond time and space. Thus, in addition to getting a recharge, the soul oftentimes catches sight of events that are coming our way, both positive and negative. These glimpses are then filtered down to the body, where they take the form of dreams. Most of our dreams are a combo-plate special.

Don't panic just yet. Big Think Interview With Michael Laitman. With rendition switcher Question: What are the basic precepts of Kabbalah? 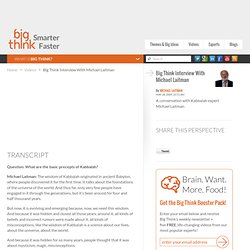 Michael Laitman: The wisdom of Kabbalah originated in ancient Babylon, where people discovered it for the first time. It talks about the foundations of the universe of the world. And thus far, only very few people have engaged in it through the generations, but it’s been around for four and half thousand years. But now, it is evolving and emerging because, now, we need this wisdom. And because it was hidden for so many years, people thought that it was about mysticism, magic, misconceptions. Hermetic Kabbalah. Kabbalah Secrets; Digging out the hidden codes and teaching of kabbalah.

Rosicrucian Kabbalah. The Kabbalah and Freemasonry. The Mixed Qabalah – First Working « Ananael. As many of you know, I recently published an essay entitled The Return of Psalm Magick and the Mixed Qabalah. 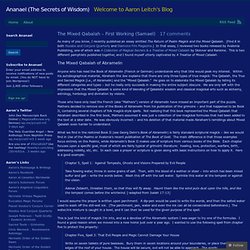 (Find it in both Hoodoo and Conjure Quarterly and Diamond Fire Magazine.) In that essay, I reviewed two books released by Avalonia Publishing, one of which was A Collection of Magical Secrets & a Treatise of Mixed Cabalah by Skinner and Rankine. This is two different pamphlets published together, and I found myself utterly captivated by A Treatise of Mixed Cabalah. The Mixed Qabalah of Abramelin Anyone who has read the Book of Abramelin (French or German) understands why that title would peak my interest. Those who have only read the French (aka “Mathers”) version of Abramelin have missed an important part of the puzzle. What we find in the restored Book II (see Georg Dehn’s Book of Abramelin) is fairly standard scriptural magick – like we would find in Use of the Psalms or Avalonia’s recent publication of The Book of Gold.

I would assume the prayer is written upon parchment.