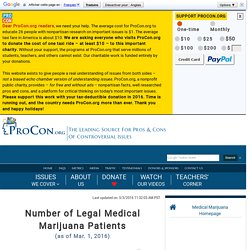 California has registered 84,111 card holders since the program began, but cards are only valid for one year; 6,490 cards were issued FY2014-2015. California's registry is voluntary, so the number of cardholders likely underestimates the number of users. For this resource we have used the Marijuana Policy Project (MPP) Feb. 8, 2016 estimate for the number of California patients, which is based on Oregon's patients per capita. Maine also has voluntary registration (1,480 registered card holders), so we used the Aug. 31, 2015 estimate from MPP, which is based on Michigan's patient numbers. 2. 3. 4. Marijuana Industry 2016. 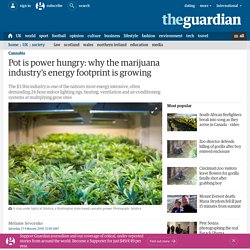 Pot is power hungry. The $3.5bn cannabis industry is one of the nation’s most energy intensive, often demanding 24-hour indoor lighting rigs, heating, ventilation and air-conditioning systems at multiplying grow sites. As many as 10 states could legalize recreational marijuana this year, which means the resultant electricity consumption could cause problems for public utilities and city officials. A study by scientist Evan Mills, with the Lawrence Berkeley National Laboratory, revealed that legalized indoor marijuana-growing operations account for 1% of total electricity use in the US, at a cost of $6bn per year. Annually, such consumption produces 15m tons of greenhouse gas emissions (CO2), equal to that of three million average cars. 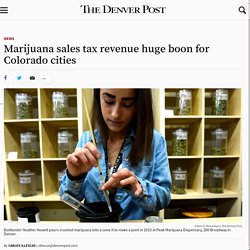 Aurora is using $1.5 million of its revenue from pot sales and fees to address its homeless issue. Money also is going to road improvements and a new recreation center. Adams County has earmarked more than $500,000 for scholarships for low-income students. RAND RR466. Market%20Size%20and%20Demand%20Study,%20July%209,%202014%5B1%5D. Before the Grand Opening: Measuring Washington State's Marijuana Market in the Last Year Before Legalized Commercial Sales. In 2012, Washington state voters passed Initiative 502 (I-502), which removed the prohibition on the production, distribution, and possession of marijuana for nonmedical purposes and required the state to regulate and tax a new marijuana industry. 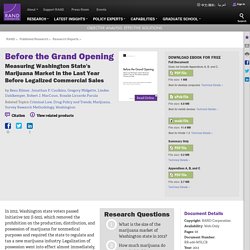 Legalization of possession went into effect almost immediately, but the revolutionary aspect of the law — allowing businesses to openly produce and distribute commercial-scale quantities for nonmedical use — is expected to be fully implemented in 2014. 2014%20MED%20Annual%20Report 1. Washington state marijuana retailers cope with falling prices. By The Associated Press LONGVIEW, Wash. — As the price of marijuana continues to drop, Washington pot businesses are struggling to keep up with the changes. 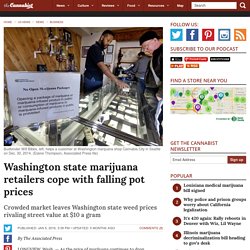 According to data from the Washington Liquor and Cannabis Board, since legal marijuana entered the market in July 2014, prices have dropped from $25 to $30 per gram to about $10 a gram now, The Daily News in Longview reports. DEA Statistics Reveal Domestic Cultivation Trends. The Drug Enforcement Administration’s Domestic Cannabis Eradication/Supression Program (DCESP) works with state law enforcement to find and eradicate cultivated marijuana in the United States and is one of the few sources for data on domestically grown cannabis. 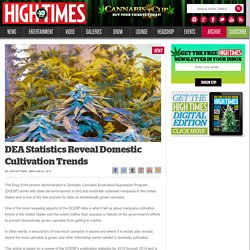 One of the most revealing aspects of the DCESP data is what it tell us about marijuana cultivation trends in the United States and the extent (rather than success or failure) of the government’s efforts to prevent domestically grown cannabis from getting to market. In other words, a description of how much cannabis is seized and where it is seized also reveals where the most cannabis is grown and other interesting trends related to domestic cultivation. This article is based on a review of the DCESP’s eradication statistics for 2010 through 2014 and is primarily based on the average data of various states for this five year period. California is in a class by itself. Oregon Medical Marijuana Program Statistics. Where Americans Smoke and Grow Marijuana (Maps)

Marijuana's popularity has fluctuated throughout history and across the globe. 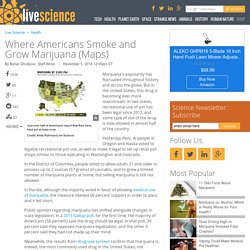 But in the United States, this drug is becoming ever more mainstream. In two states, recreational use of pot has been legal since 2012, and some type of use of the drug is now allowed in almost half of the country. Yesterday (Nov. 4) people in Oregon and Alaska voted to legalize recreational pot use, as well as make it legal to set up retail pot shops similar to those operating in Washington and Colorado.

State Marijuana Laws in 2016 Map. Twenty-six states and the District of Columbia currently have laws legalizing marijuana in some form. 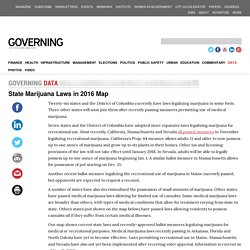 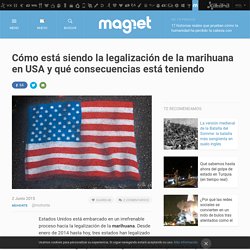 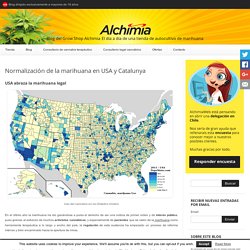 Knox Nursery of Winter Garden, will grow it for the Central Region. Number of Legal Medical Marijuana Patients. 24 Legal Medical Marijuana States and DC. Where Americans Smoke and Grow Marijuana (Maps) Colorado pot grows used as much energy as 35,000 homes in 2014 – The Denver Post. Pot’s not green. The $3.5 billion U.S. cannabis market is emerging as one of the nation’s most power-hungry industries, with the 24-hour demands of thousands of indoor growing sites taxing aging electricity grids and unraveling hard-earned gains in energy conservation.

Without design standards or efficient equipment, the facilities in the 23 states where marijuana is legal are responsible for greenhouse-gas emissions almost equal to those of every car, home and business in New Hampshire. While reams of regulations cover issues from tracking individual plants to package labeling to advertising, they lack requirements to reduce energy waste. Some operations have blown out transformers, resulting in fires. Quest Diagnostics : Drug Testing Index™ Madison, N.J., June 9, 2015 - The percentage of American workers testing positive for illicit drugs such as marijuana, cocaine and methamphetamine has increased for the second consecutive year in the general U.S. workforce, according to insights from more than 10 million workplace drug test results released today by Quest Diagnostics, the world’s leading provider of diagnostic information services.

The analysis suggests a potential reversal in the decades’ long decline in the abuse of illicit drugs in the United States workforce. The Quest Diagnostics Drug Testing Index (DTI) shows that the positivity rate for approximately 6.6 million urine drug tests in the general U.S. workforce increased overall by 9.3 percent, to 4.7 percent in 2014 compared to 4.3 percent in 2013. 2013 was the first year since 2003 in which the overall positivity rate for urine drug tests increased in the general U.S. workforce. Marijuana Positivity Increases Nationally for the Second Consecutive Year. Quest Diagnostics : Drug Testing Index™ Will Measure 91 make Oregon the most marijuana friendly state in the US? This time, say the backers of the latest vote to legalise marijuana in Oregon, things are different.

Two years ago, as neighbouring Washington state and Colorado became the first to authorise the sale of recreational cannabis to adults, Oregonians shot down a similar measure at the ballot box. Now they are being asked once again to approve the legalisation of marijuana but after a very different campaign. The 2012 initiative was widely criticised as too open to abuse, and was clearly written by true believers – the proposed legislation made reference to George Washington growing cannabis and referred to “federal and corporate misinformation campaigns” that “suppresses” the truth about marijuana. The future of weed? Vending machines could transform legal marijuana industry. Buying medical marijuana just got a lot easier for the United States’ booming legal-weed industry – and a lot more high-tech. Washington state’s first pot vending machine is located inside Seattle Caregivers medical dispensary, where employees will keep it stocked with pot-infused edibles as well as marijuana flowers.

This doesn’t mean that anyone can just walk up, stuff in a couple dollars and buy the kush of their choice – even if the nation’s top medical official is warming up to weed. “That machine is like a miniature little Fort Knox,” Greg Patrick, a spokesman for the American Green, told NBC news. First-time users of the machine – called the ZaZZZ, from a company called American Green – must swipe both their medical marijuana cards and their driver’s license to prove they are allowed to buy the products. Marijuana millionaires cashing in on cannabis legalisation. Jeremy Moberg peers into a microscope at a leaf in a Petri dish. “Thrips”, he declares to a man wearing a facemask and surgical gloves. High rollers: marijuana entrepreneurs harvest cash from legalised industry. When Brendan Kennedy told his family he was leaving his job at the Silicon Valley Bank to go into the marijuana industry, they thought he was crazy. Kennedy, who has an MBA from Yale, does not fit the classic image of a marijuana operator.

Sharply suited and softly spoken, he is more likely to quote Schumpeter than Bob Marley, and except for the occasional high-resolution photograph of bright green leaves, his company’s airy Seattle office feels more like the headquarters of a Silicon Valley incubator than anything to do with weed. But as the chief executive of Privateer Holdings, a venture capital firm operating exclusively in weed businesses, Kennedy is on the cutting edge of a new breed of entrepreneurs looking to take advantage of a new gold rush – a green rush – made possible by the legalisation of cannabis.