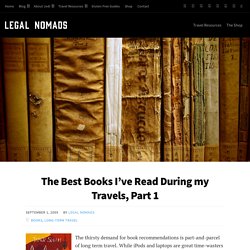 While iPods and laptops are great time-wasters on an endless bus journey, nothing satisfies like the pages of a good book. When I travel, I try and limit my reading to non-fiction. After all, to travel for travel itself is so fundamentally indulgent that the least I can do is try and learn as I go! Most of the books I buy or trade are therefore non-fiction, but I’ve been handed some great fiction to read during my journey and have included those as well. In addition, I’ve included some of my favorites from home at the end of the list. I will surely update this list at the end of my trip, but these are the books that have stood out during the last 15 months. 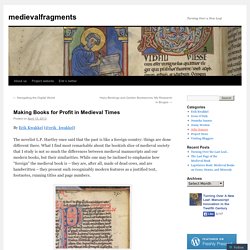 Hartley once said that the past is like a foreign country: things are done different there. What I find most remarkable about the bookish slice of medieval society that I study is not so much the differences between medieval manuscripts and our modern books, but their similarities. While one may be inclined to emphasize how “foreign” the medieval book is – they are, after all, made of dead cows, and are handwritten – they present such recognizably modern features as a justified text, footnotes, running titles and page numbers. Leaf number in Paris Bible (BL, Arundel 311, 13th c) Medieval Manuscript Reproduction. – August 16, 2009Posted in: Videos This series of videos comes from an American graduate student who works as a calligrapher who specializes in reproductions of medieval manuscripts. 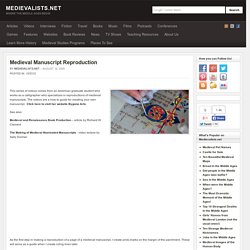 History and Explanation of Haiku Haiku is a major type of Japanese poetry. 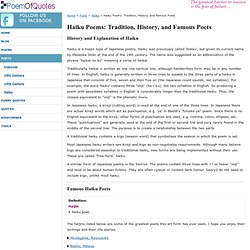 Haiku was previously called 'hokku', but given its current name by Masaoka Shiki at the end of the 19th century. The name was suggested as an abbreviation of the phrase "haikai no ku" meaning a verse of haikai. Traditionally haikai is written as one line vertical line, although handwritten form may be in any number of lines. In English, haiku is generally written in three lines to equate to the three parts of a haiku in Japanese that consists of five, seven and then five on (the Japanese count sounds, not syllables). In Japanese haiku, a kireji (cutting word) is used at the end of one of the three lines.

A traditional haiku contains a kigo (season word) that symbolises the season in which the poem is set. Most Japanese haiku writers see kireji and kigo as non-negotiable requirements. A similar form of Japanese poetry is the Senryū. Famous Haiku Poets Definition: Haijin A haiku poet. Poetry Foundation.