51 Of The Most Beautiful Sentences In Literature 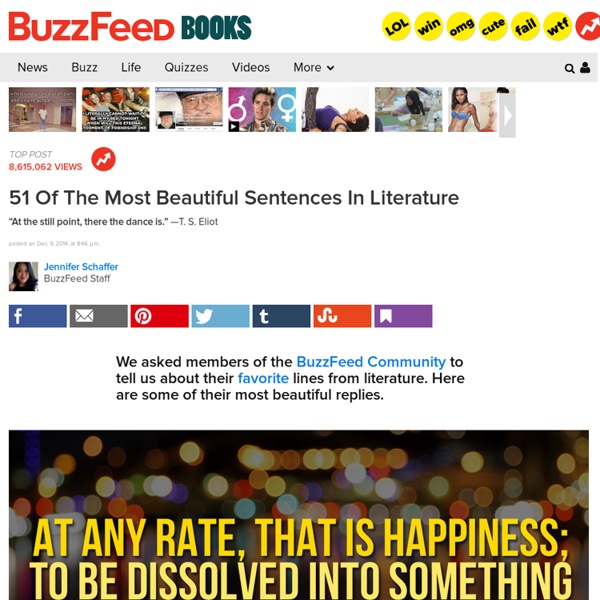 Reinier Gerritsen photographs readers on the subway in his series, The Last Book. Reinier Gerritsen, courtesy Julie Saul Gallery, New York Reinier Gerritsen doesn’t think books will be around much longer. That’s why you see them everywhere you look in his series, “The Last Book,” which is on display at New York City’s Julie Saul Gallery through Feb. 7. Like a scientist cataloging the last of an endangered species, the Dutch photographer wandered the New York City subway system for weeks, snapping pictures of readers of printed books among an increasingly dominant population of iPhone and Kindle readers.

World's coolest bookstores Stunning El Ateneo bookstore in Buenos Aires was once a theater. The theater boxes have been turned into reading spaces. Paris Left Bank fixture Shakespeare and Company hosts writers-in-residence and awards its own literary prize to an aspiring writer every few years. 5 examples of how the languages we speak can affect the way we think Keith Chen (TED Talk: Could your language affect your ability to save money?) might be an economist, but he wants to talk about language. For instance, he points out, in Chinese, saying “this is my uncle” is not as straightforward as you might think. In Chinese, you have no choice but to encode more information about said uncle. The language requires that you denote the side the uncle is on, whether he’s related by marriage or birth and, if it’s your father’s brother, whether he’s older or younger.

How Do Blue Eyes Get Their Color? When poets compare beautiful eyes to the sea or sky they're probably not aware how accurate they are being. In each case the color is a product not of pigments but the scattering of multicolored light so that only the blue reaches the observer. On a clear day sunlight scatters off molecules in the atmosphere, but does so more at short wavelengths. Blue light is scattered almost ten times as effectively as red. As Paul Van Slembrouck explains in this Medium piece (with drawings) irises of people with blue eyes scatter the light back in the same way.

This Is What Happens When You Drink 10 Cans Of Soda Per Day for One Month It’s not news that soda is bad for us. But it is jarring to witness the physical effects drinking too much of it has on our waistlines. George Prior, 50, has guinea-pigged his body to do just that. Following in the body-hacking footsteps of Morgan Spurlock — the “Super Size Me” filmmaker who in 2004 ate three McDonald’s meals for 30 days straight — Prior began guzzling down ten 12-ounce cans of Coca Cola daily for one month to see how the whopping dose of added sugar would affect his healthy physique. He documented it all on his website, 10 Cokes A Day. What Project-Based Learning Is — and What It Isn’t Screenshot/High Tech High The term “project-based learning” gets tossed around a lot in discussions about how to connect students to what they’re learning. Teachers might add projects meant to illustrate what students have learned, but may not realize what they’re doing is actually called “project-oriented learning.” And it’s quite different from project-based learning, according to eighth grade Humanities teacher Azul Terronez. Terronez, who teaches at High Tech Middle, a public charter school in San Diego, Calif says that when an educator teaches a unit of study, then assigns a project, that is not project-based learning because the discovery didn’t arise from the project itself. And kids can see through the idea of a so-called “fun project” for what it often is – busy work.

15 styles of Distorted Thinking 15 styles of Distorted Thinking Filtering: You take the negative details and magnify them while filtering out all positive aspects of a situation. Polarized Thinking: Things are black or white, good or bad. You have to be perfect or you're a failure. There is no middle ground. 7 countries where Americans can study at universities, in English, for free (or almost free) The Humboldt University of Berlin was illuminated during the 10th annual Festival of Lights in Berlin in October. (EPA/PAUL ZINKEN) Since 1985, U.S. college costs have surged by about 500 percent, and tuition fees keep rising. In Germany, they've done the opposite. The country's universities have been tuition-free since the beginning of October, when Lower Saxony became the last state to scrap the fees. Tuition rates were always low in Germany, but now the German government fully funds the education of its citizens -- and even of foreigners.

Why Am I Still Thinking About My Ex? One of the hardest stages in the relationship cycle is the moving on phase. A lot of us may have asked the question, “Why am I thinking about my ex?” either to ourselves or to someone we trust. School Library Association NSW State Library Day Details A one-day seminar featuring; Lyn Hay, Aaron Blabey & Carol Gordon. Date: Saturday 14th March, 2015 Time: 9.00am - 3.00pm Location:State Library NSW Accreditation: NSW Institute of Teachers at Proficient Teacher Level Registration Fee: $269.10 ($296.01 GST incl) SLANSW Members $299.00 ($328.90 GST incl) Non-Members Download PDF »Register now »

Immortal Beloved: Beethoven’s Passionate Love Letters By Maria Popova A student of both Mozart and Haydn, Ludwig van Beethoven (1770–1827) endures as one of the most influential and beloved composers of all time. Whenever I find myself with a sunken heart, I promptly put his Ninth Symphony on repeat. It’s only befitting that a man of such extraordinary capacity to elevate the soul with beauty should be the author of some of the most breathtaking love letters of all time. Beethoven never married, but in his early forties he feel deeply in love with a mysterious woman who remains known as “immortal beloved” — the eternally enchanting term of endearment by which the great composer addressed her in his letters.