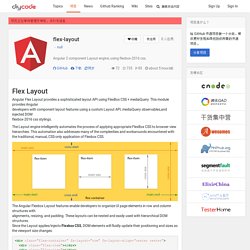 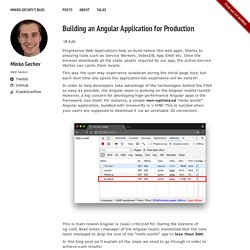 Once the browser downloads all the static assets required by our app, the active Service Worker can cache them locally. This way the user may experience slowdown during the initial page load, but each next time she opens the application her experience will be instant! In order to help developers take advantage of the technologies behind the PWA as easy as possible, the Angular team is working on the Angular mobile-toolkit. However, a big concern for developing high-performance Angular apps is the framework size itself. For instance, a simple non-optimized “Hello world!” Source Maps. To improve the debuggability of an application, we can set up source maps for both code and styling. 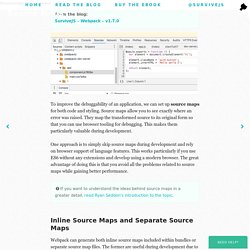 Source maps allow you to see exactly where an error was raised. They map the transformed source to its original form so that you can use browser tooling for debugging. This makes them particularly valuable during development. One approach is to simply skip source maps during development and rely on browser support of language features. This works particularly if you use ES6 without any extensions and develop using a modern browser. If you want to understand the ideas behind source maps in a greater detail, read Ryan Seddon's introduction to the topic. Webpack can generate both inline source maps included within bundles or separate source map files. You may not want to generate a source map for your production bundle as this makes it easy to inspect your application (it depends on whether you want this or not; it is good for staging). TypeScript - Libraries.io. 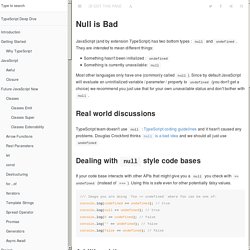 RxJS - Javascript library for functional reactive programming. One of the most difficult tasks in asynchronous programming is dealing with errors. 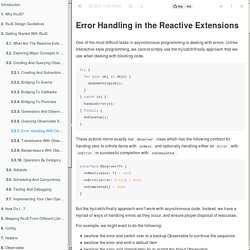 Unlike interactive style programming, we cannot simply use the try/catch/finally approach that we use when dealing with blocking code. try { for (var obj in objs) { doSomething(obj); } } catch (e) { handleError(e); } finally { doCleanup(); } These actions mirror exactly our Observer class which has the following contract for handing zero to infinite items with onNext and optionally handling either an Error with onError or successful completion with onCompleted. But the try/catch/finally approach won't work with asynchronous code. Instead, we have a myriad of ways of handling errors as they occur, and ensure proper disposal of resources. For example, we might want to do the following: Setting Up Angular 2 with Webpack - Semaphore. Take a look at the steps needed to set up a test-driven Angular 2 project with Webpack and TypeScript. 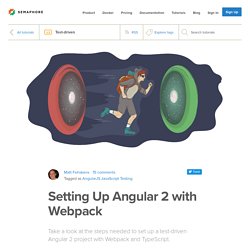 Introduction In this article, we'll be looking at the setup required to create an Angular 2 project with unit tests. We'll cover various required technologies and how to write each of their configurations. Let's dive in. Prerequisites and Assumptions Before getting started, we should make sure that we have everything we need. An intermediate understanding of JavaScript, including concepts of CommonJS modules,At least a rough understanding of Angular 1,An understanding of ES6/ES2015 concepts, such as arrow functions, modules, classes and block-scoped variables,Comprehension of using command line or terminal, such as Git Bash, iTerm, or your operating system's built-in terminal, andYou have Node >= v4 and NPM >= v2 installed. AngularClass/angular2-webpack-starter: An Angular 2 Starter kit featuring Angular 2 (Router, Http, Forms, Services, Tests, E2E, Dev/Prod, HMR, Async/Lazy Routes), Material Design, Karma, Protractor, Jasmine, Istanbul, TypeScript 2, TsLint, Codely.

Angular 2 HTTP Requests with Observables. Free Course Getting Started with Angular 2 Angular 2 is the shiny new framework that comes with a lot of new concepts. 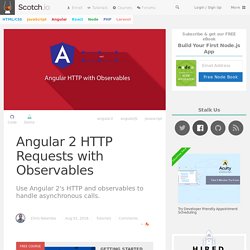 Learn all the great new features. Making HTTP requests is a vital operation in the life of most front-end applications. Angular 2, which is the hottest thing right now has a really cool way of doing that. We will create a comments app. Zones in Angular by thoughtram. Join us at ngconf! 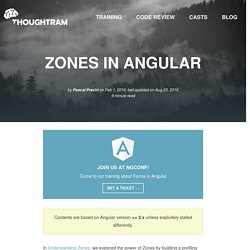 Come to our training about Forms in Angular Get a ticket → Contents are based on Angular version >= 2.x unless explicitely stated differently. In Understanding Zones, we explored the power of Zones by building a profiling zone that profiles asynchronous operations in our code. We learned that Zones are a sort of execution context that allows us to hook into our asynchronous tasks. A Beginner's Guide To Using ngrx In An Ionic 2 App - Part 2.

In Part 1 of this tutorial we used @ngrx/store to manage our application state in memory. 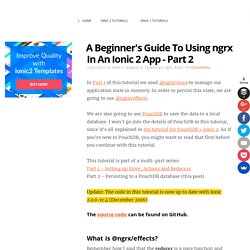 In order to persist this state, we are going to use @ngrx/effects. We are also going to use PouchDB to save the data to a local database. I won't go into the details of PouchDB in this tutorial, since it's all explained in my tutorial for PouchDB + Ionic 2. GitHub - JSteunou/webstomp-client: Stomp client over websocket for browsers. MQTT Dashboard - Angular Attack. MQTT is a protocol often used in IoT. 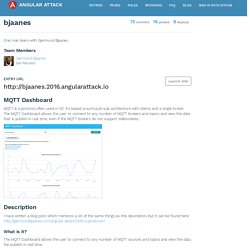 Dynamic Forms - ts - COOKBOOK. We can't always justify the cost and time to build handcrafted forms, especially if we'll need a great number of them, they're similar to each other, and they change frequently to meet rapidly changing business and regulatory requirements. It may be more economical to create the forms dynamically, based on metadata that describe the business object model. In this cookbook we show how to use formGroup to dynamically render a simple form with different control types and validation. It's a primitive start. It might evolve to support a much richer variety of questions, more graceful rendering, and superior user experience. All such greatness has humble beginnings. In our example we use a dynamic form to build an online application experience for heroes seeking employment. Table of contents Bootstrap Question Model. Ng-lightning - Native Angular 2 components and directives for Lightning Design System.

There are no ways to insert HTML fragments into the component view except using innerHTML. But if we could create a component and load it…? Yes, we can do it! Capturing Document-Click Events With AngularJS. GitHub - flauc/angular2-notifications: A light and easy to use notifications library for Angular 2. It features both regular page notifications (toasts) and push notifications. Juri's TechBlog - Angular 2 Collection. Todd Motto: JavaScript and Angular articles. Tag Archive for "angular-js" Renovo Solutions. Learn Angular 2 · Learn Angular 2. PrimeFaces. All articles by thoughtram. Articles by thoughtram. Akveo/ng2-admin: Angular 2 admin dashboard framework.

Angular2-tree-component/README.md at master · 500tech/angular2-tree-component. Demos - ngTagsInput. Angular 2 Components: Inputs and Outputs. This article is part of a web development series from Microsoft. Thank you for supporting the partners who make SitePoint possible. This is the second part in the Angular 2 series. You can read part one here. In this article we’ll take a look a bit closer at components — how they are defined and how to get data into them and back out from them. We covered the basic idea of components and decorators in an earlier article, and have specifically seen the @Component and @View decorators used to build an Angular application; this article dives in a bit deeper.

GitHub - valor-software/ng2-dragula: Simple drag and drop with dragula. Bevacqua/dragula: Drag and drop so simple it hurts. Configuration. Component-Relative Paths in Angular 2 by thoughtram. Component-based development is Angular 2’s most-loved feature. By now you should be familiar with using the @Component decorators to create components. You should be familiar with the required metadata information such as selector and template. If the above component syntax is new and strange, you should first review our article on Building a Zipping Component in Angular 2. If you are familiar with these concepts and you happen to be lucky, your components load without any problems.

Mostly likely, though, you have already encountered (or soon will) the dreaded, frustrating 404 component-loading errors: These errors mean your template HTML or styles (CSS) cannot be loaded! Let’s talk about why that happens and see how we can solve such problems in a way that is flexible and portable. One way to do this is to set the styles and template property in the component metadata.