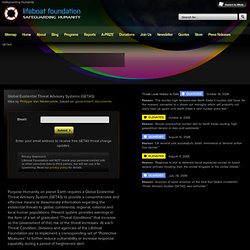 Enter your email address to receive free GETAS threat change updates. Privacy Statement: Lifeboat Foundation will NOT reveal your personal contact info or other sensitive data to third parties, nor will we use it for spamming. Purpose Humanity on planet Earth requires a Global Existential Threat Advisory System (GETAS) to provide a comprehensive and effective means to disseminate information regarding the existential threats to global, continental, regional, national and local human populations. Overview The Lifeboat Foundation Global Existential Threat Advisory System (GETAS) shall be binding on the divisions and agencies of the Lifeboat Foundation. The higher the Threat Condition, the greater the risk of an existential catastrophe to occur. To what degree is the threat information credible? 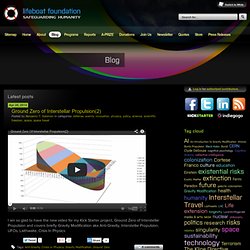 According to much of the negative commentary in the Scottish independence debate, scientific research in Scotland will be negatively affected by independence. However, Scottish contributions to science will in the long term receive more recognition if Scotland is an independent state. Scotland is on the periphery of the UK. According to supporters of independence, the public spending Scotland is receiving from London is not proportionate to what it contributes to the British economy.

Independence: justified for any group that is neglected and marginalized Scottish independence is not some narrow-minded celebration of nationalism, but a prudent economic decision. Desperately negative or even outright threatening statements from London aimed at the Scottish people only strengthen their preference not to be governed by London, thus leading to an increase in support for independence. Existential risk. A global catastrophic risk is a hypothetical future event with the potential to inflict serious damage to human well-being on a global scale.[2] Some such events could destroy or cripple modern civilization. 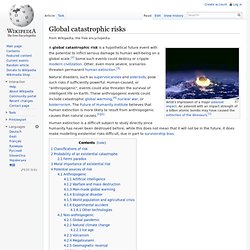 Other, even more severe, scenarios threaten permanent human extinction.[3] Natural disasters, such as supervolcanoes and asteroids, pose such risks if sufficiently powerful. Human-caused, or "anthropogenic", events could also threaten the survival of intelligent life on Earth. These anthropogenic events could include catastrophic global warming,[4] nuclear war, or bioterrorism. The Future of Humanity Institute believes that human extinction is more likely to result from anthropogenic causes than natural causes.[5][6] Human extinction is a difficult subject to study directly since humanity has never been destroyed before; while this does not mean that it will not be in the future, it does make modelling existential risks difficult, due in part to survivorship bias. 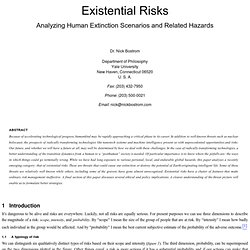 Nick Bostrom Department of Philosophy Yale University New Haven, Connecticut 06520 Fax: (203) 432-7950 Phone: (203) 500-0021 Email: nick@nickbostrom.com Because of accelerating technological progress, humankind may be rapidly approaching a critical phase in its career. It’s dangerous to be alive and risks are everywhere. 1.1 A typology of risk We can distinguish six qualitatively distinct types of risks based on their scope and intensity (figure 1). Figure 1. “Personal”, “local”, or “global” refer to the size of the population that is directly affected; a global risk is one that affects the whole of humankind (and our successors). 1.2 Existential risks In this paper we shall discuss risks of the sixth category, the one marked with an X. Existential risks are distinct from global endurable risks. I shall use the following definition of existential risks: Risks in this sixth category are a recent phenomenon.