Lone wolf survivor – Craig Medred. The white color phase of an Alaska wolf/Wikimedia Commons A white wolf that isn’t supposed to be alive has finally made the news in Alaska’s largest city. 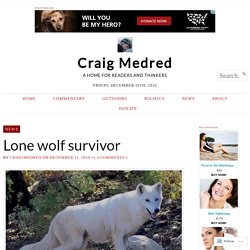 KTUU.com on Friday reported the wolf in Anchorage after television station viewer LeRoy Polk turned over a videotape of wolf reportedly dragging a caribou hide into the woods along an Anchorage street. Where the caribou hide came from is unclear. Caribou are not native to the surrounding Chugach Mountains. The 10- to 12-year-old wolf herself is identifiable by a radio collar, now inoperative, put around her neck in 2009. Her Anchorage appearance was unexpected and went unreported at first because of fears she might cause something of a panic or become a troublesome attraction or both. The wolf was supposed to have died in an extermination effort in 2011. After years of preying on loose dogs, they had begun approaching people out with their pets.

Dangerous animals Unbelievable attack At first, few wanted to believe what had happened.

Why does Sarah Palin support shooting wolves in Alaska? The state of Alaska may no longer loom as large in the American consciousness as it did during the presidential election, but enviros won't let us forget failed GOP veep candidate Gov. 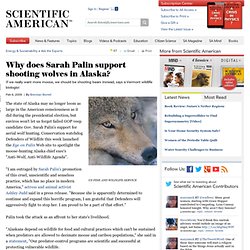 Sarah Palin's support for aerial wolf hunting. Conservation watchdog Defenders of Wildlife this week launched the Eye on Palin Web site to spotlight the moose-hunting Alaska chief exec's "Anti-Wolf, Anti-Wildlife Agenda". "I am outraged by Sarah Palin's promotion of this cruel, unscientific and senseless practice, which has no place in modern America," actress and animal activist Ashley Judd said in a press release. "Because she is apparently determined to continue and expand this horrific program, I am grateful that Defenders will aggressively fight to stop her. I am proud to be a part of that effort.

" Palin took the attack as an affront to her state's livelihood. [An edited transcript of the interview follows.] Why do we need to manage wildlife populations? Bears? Bears are held to a different standard. 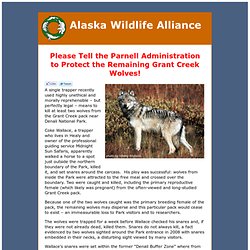 Coke Wallace, a trapper who lives in Healy and owner of the professional guiding service Midnight Sun Safaris, apparently walked a horse to a spot just outside the northern boundary of the Park, killed it, and set snares around the carcass. His ploy was successful: wolves from inside the Park were attracted to the free meal and crossed over the boundary. Two were caught and killed, including the primary reproductive female (which likely was pregnant) from the often-viewed and long-studied Grant Creek pack. Because one of the two wolves caught was the primary breeding female of the pack, the remaining wolves may disperse and this particular pack would cease to exist – an immeasurable loss to Park visitors and to researchers. Please send a message or call (or better yet, both) to the following: Gov.

U.S. Alaska Wildlife Alliance - Saving and Protecting Alaska's Wildlife since 1978 - Wolves a Vital Part of a Healthy Alaska. Why a lone Alaska wolf traveled thousands of miles only to die of starvation. Thanks to information from a collar that communicated with satellites, a biologist has closed the book on the long journey of a male wolf that left its pack a year ago and wandered thousands of miles through northern Alaska. 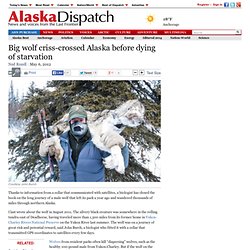 I last wrote about the wolf in August 2011. The silvery black creature was somewhere in the rolling tundra east of Deadhorse, having traveled more than 1,500 miles from its former home in Yukon-Charley Rivers National Preserve on the Yukon River last summer. The wolf was on a journey of great risk and potential reward, said John Burch, a biologist who fitted it with a collar that transmitted GPS coordinates to satellites every few days. Wolves from resident packs often kill “dispersing” wolves, such as the healthy 100-pound male from Yukon-Charley. But if the wolf on the move finds a territory in which the dominant male is dead, or if it finds another female on the move without a resident pack, it might form a new group, Burch said.