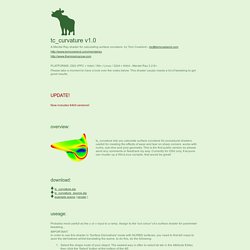 This shader usualy needs a lot of tweaking to get good results. Now includes 64bit versions! Overview: download: tc_curvature.zip tc_curvature_source.zip example scene [ render ] useage: Probably most usefull as the u or v input to a ramp. IMPORTANT: In order to use this shader in 'Surface Derivatives' mode with NURBS surfaces, you need to first tell maya to save the derivatives whilst translating the scene. to do this, do the following: Select the shape node of your object. You dont need to do this for Poly meshes or whilst using any of the tesselation based methods. parameters: examples: notes / known issues: The output range varies considerably from surface to surface so much tweaking of the clipping values is usually needed. Unreal Engine 4 Tutorial Part 8 - Move it! [Tutorial] Multiplayer supported UsableActor System in Blueprint - Tom Looman. Introduction By popular demand I created this Blueprint tutorial variation based on my earlier UsableActor tutorial in C++. 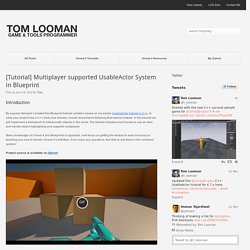 In case your project has a C++ back-end already I would recommend following that tutorial instead. In this tutorial we will implement a framework to interact with objects in the world. The tutorial includes event hooks to use an item and handle object highlighting and supports multiplayer. Basic knowledge of Unreal 4 and Blueprints is expected, I will focus on getting the feature to work and less on teaching you how to handle Unreal 4’s Interface. Project source is available on GitHub! The Concept The character performs a ray trace each tick that find the currently looked at actor that derives from our “UsableActor”. BP_UsableActor First create a new Blueprint that will act as our item to be destroyed, derive it from StaticMeshActor. Inventory System Tutorial Unreal Engine 4: Part 1 - The Introduction. 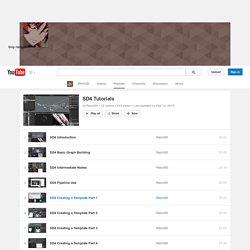 Working... sRich3D ► Play all SD4 Tutorials by Reich0012 videos743 viewsLast updated on Feb 10, 2015 Play all Sign in to YouTube Sign in History Sign in to add this to Watch Later Add to. 3ds Max Tutorial (Beginner) Of Bit Depths, Banding and Normal Maps. This is an issue that pops up more and more frequently these days. 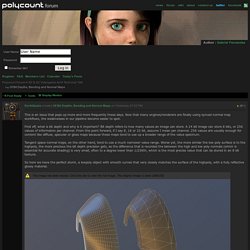 Now that many engines/renderers are finally using synced normal map workflows, the weaknesses in our pipeline become easier to spot. First off, what is bit depth and why is it important? Bit depth refers to how many values an image can store. A 24 bit image can store 8 bits, or 256 values of information per channel. From this point forward, if I say 8, 16 or 32 bit, assume I mean per channel. 256 values are usually enough for content like diffuse, specular or gloss maps because these maps tend to use up a broader range of the value spectrum.

Tangent space normal maps, on the other hand, tend to use a much narrower value range. Realistic Rendering Example. Overview This example shows off the realistic rendering possibilities of Unreal Engine 4. 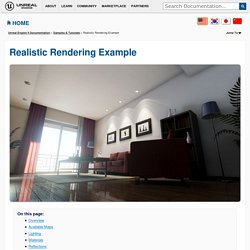 The goal was to create a small scene that had the look and feel of an architectural rendering, as those produced by CG rendering engines such as VRay and Mental Ray. However, the primary stipulation in this case was that all assets be game-ready, meaning that no high-poly modeling could be used. Everything in the scene had to be created such that one could make an actual and practical game using these methods.

Skew you buddy! Making sense of skewed normal map details. This is really a continuation of the waviness thread, but I figured i would start a new topic here as I feel this is essential information and a lot of people still struggle with the concept. 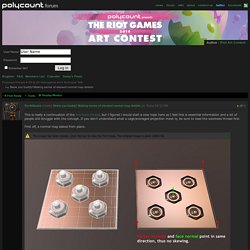 If you don’t understand what a cage/averaged projection mesh is, be sure to read the waviness thread first. First off, a normal map baked from plane. As this is a simple plane, the vertex normals point in the same direction as the face normal, so the detail is projected without any skewing. Its important to talk about vertex normals and face normals separately here, because vertex normals are averaged between the adjacent faces, so even though your polygon is flat, your vertex normals almost certainly are not.

Additionally, when I refer to vertex normals, I’m talking about the normals of the projection mesh/cage, which should be averaged and ignore the mesh normals of your lowpoly entirely (if not, you’ll get gaps, read the other thread if you’re confused at this point). Quantum Human. 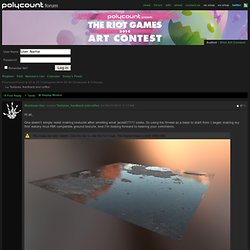 You definitely should be sculpting these. Your normals and displacements will come out 10x better than if it's based off of a photo. I think the reason your mud texture looks pretty off is because there is no real context in the texture. Without the context it does really look like melting snow. When I say you should add context what I mean by that is you need to add indicators of where this texture is located/what it's comprised of. 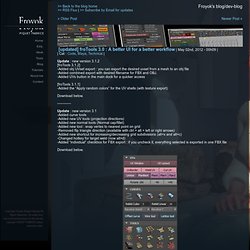 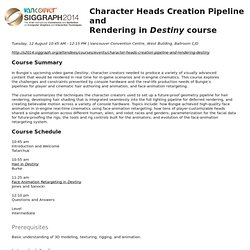 This course explores the challenges and constraints presented by console hardware and the real-life production needs of Bungie’s pipelines for player and cinematic hair authoring and animation, and face-animation retargeting. The course summarizes the techniques the character creators used to set up a future-proof geometry pipeline for hair rendering, developing hair shading that is integrated seamlessly into the full lighting pipeline for deferred rendering, and creating believable motion across a variety of console hardware. Siggraph_2014_destiny_hair_pipeline.pdf. Ratchet_and_Clank_WWS_Debrief_Feb_08.pdf. Derivative Normal Maps - What are they? - Page 2. Derivative Maps in xNormal. Version 3.17.8 of xNormal has just been released with a new map type called a Derivative map. 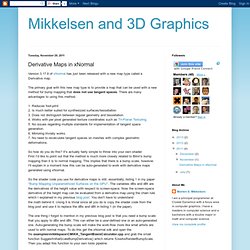 The primary goal with this new map type is to provide a map that can be used with a new method for bump mapping that does not use tangent spaces. There are many advantages to using this method. 1. DebrisMaker2 - Procedural geometry creation tool for 3dsMax. Creating a Textured Brush in 3D Coat. PBR Practical Workflow. Photoshop Normal map rotation tool? It's pretty easy to code this with tangent-space normal maps. basic concept: save every pixel in to a 2D Array with it's current R and G (and B) Value (B will not change). R and G convert to a vector of 3 dimensions (while only 2 have a value, which is x for red and y for green and z is defined as following) with angle in dependence of theyr greyscale value that is alpha = (Greyscalevalue(of R or G)-12 . So your pixel array now saves two vectors for R and G there one points left and up and one points towards the top (of the image boundaries) and up. Essentials, EP 2: Rotating Normal Maps. Combine normal maps script for Photoshop.

Hello! I’ve just finished working on a script for Photoshop that combines normal maps using the “detail-oriented” technique described here: The script takes all the visible layers from your document and combines them. It should work with 8 and 16 bit images. You can change the intensity of all the individual normal maps realtime regardless of the size It also works with just 1 normal map if you want to increase or decrease the strength of it.

Photoshop - Combine Normal Maps. The Gamedev Cast PBR Special - LIVE. Physically Based Rendering for Artists. MultiMesher. DDO & 3DO Workflow Primer. PBR for chefs. Hello, Today we are going to cook a rock! And rock with it! I've seen the work all of you guys have been doing for a long time, and that's wonderful. I'm not going to teach you anything, just want to shed some light IF there is anybody here who is not very familiar with the subject. As a person who wasn't familiar with PBR for a while ago I know documentations can be very confusing and hard to understand in the beginning. What is the point of PBR? PBR or Physically Based Rendering is a set of rules to follow when making textures and materials and the point is to make them look good under any lighting condition.

So, lets see what PBR does. With that being said, you know PBR workflow is different in every software and for now we will concentrate on Marmoset to start. The first thing we have to do is set up Photoshop correctly. So now we want to make a rock material. So you see 3 small squares in front of each material in the chart above. (Size of images is lowered to 512x512) Regards,Alireza. Hard Surface Topology Reference Archive. RefBoard! Nifty little reference viewer. Quote: Ah, that makes more sense, I think it's a security setting. When you drag a file over the app window, refBoard checks the file's extension, and Windows checks refBoard's privilege level. The slashed circle indicates one of those checks is coming back negative. Good Settings for Xnormal Curvature Map? Sorry for necroposting, maybe it's a rational necro, let's see...

I am trying to generate a Grayscale Curvatures Map like Blender's Dirty Vertex Paint (pic), or Lightwave's Dpont Curvatures node (pic-top row, second from left) so: Black=Concave | 50%Gray=Flat | White=Convex I know that there is a 'monochrome' option in the settings, but the problem is; even when I bake with Two Colors and default settings, the map doesn't even look like Post#2 of this thread (was that done in xNormal?). If I replace the colors channels to get a Grayscale or bake in Monochrome, I get something like something like the 1st Attachment, a DifuseShading/AO Map. Horizon Occlusion for Normal Mapped Reflections. Tomb Raider – Laras Hot Secrets.

Once more a Tomb Raider game is starring the beautiful Lara Croft – featuring outstanding and huge visuals which make it easy to stare and get lost like watching flames. Assassin's Creed ® 4 Black Flag and AC3 Liberation ArtWork by Tihomir Nyagolov. How to bake ambient occusion to vertex in 3ds max. Texturing Overview, tutorial, Ellie from The last of us (3d model fan art) CG Education. The Visual Difference Between Linear and Non Linear WorkflowBy Neil BlevinsCreated On: Sept 21st 2013. Game environments – Part A: rendering Remember Me. Sébastien Lagarde of Dontnod Entertainment explores the world of complex game environments especially for accurate wet simulations with a case study on the incredible new game Remember Me.

Hello everyone, I’m Andrew Hamilton, Senior Environment Artist here at DICE. My role spreads quite far throughout different aspects of the environments within Battlefield 3 and its expansions, but I tend to always lean more towards the natural elements including features such as terrain, vegetation and lighting. LOWPOLY TREES (VNT documentation) Flow Map Painter 0.3 For Max Released! The awesome script allows you to paint the direction of flow for a liquid surface and then use the resulting texture in a game engine to super realistic results. The artists of the next generation. Geomerics' Chris Doran explores the evolving role of next gen artists. Making normal maps from photographs. Surface Mimic : 3D scanned Zbrush and Mudbox alphas and textures.