List of Engineers Willing to Mentor You — Stephanie Hurlburt. Recently I put out a public call on Twitter asking engineers to mentor more people outside of work. 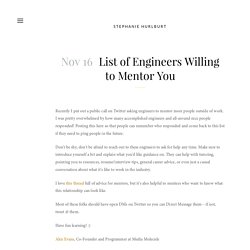 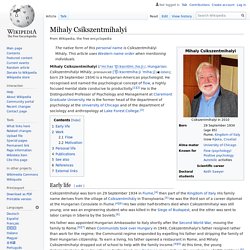 [citation needed] He received his B.A. in 1960 and his PhD in 1965, both from the University of Chicago.[6] Csikszentmihalyi is the father of artist and professor Christopher Csikszentmihályi and University of California, Berkeley[7] professor of philosophical and religious traditions of China and East Asia, Mark Csikszentmihalyi. [citation needed] In 2009, Csikszentmihalyi was awarded the Clifton Strengths Prize[8] and received the Széchenyi Prize at a ceremony in Budapest in 2011.[9] Flow[edit] Csikszentmihalyi and Happiness. "The best moments in our lives are not the passive, receptive, relaxing times… The best moments usually occur if a person’s body or mind is stretched to its limits in a voluntary effort to accomplish something difficult and worthwhile. 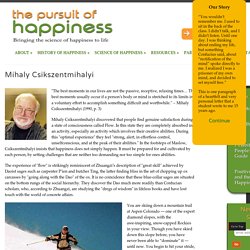 Paving the Cow Path and Other Stories by Simon Cross. Facebook product manager Simon Cross chose to talk what has influenced his theories of product management at this year’s London #mtpcon, giving the audience some constructive advice and leaving them with some food for thought. Cross has spent most of his six years with the company working on developer products and is currently working on Facebook at Work. “I’m pretty sure I’m a terrible product manager,” he joked, “at least I used to be – and I’ve spent most days in the past six years thinking about how I can be better.” Daniel Bruckner: Data Science & Strategy. Sertifikovani kursevi. Fantasy leagues are changing the way people watch football. By Kai Ryssdal and Daisy Palacios September 21, 2016 | 11:06 AM Over the past couple of decades or so, people from all over the world have found entertainment in pretending to be the owners of imaginary professional sports teams on the internet. 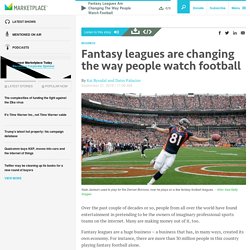 Many are making money out of it, too. Fantasy leagues are a huge business – a business that has, in many ways, created its own economy. For instance, there are more than 30 million people in this country playing fantasy football alone. The fantasy football industry affects the real football industry. How We Assess Skill Level. Features   How PlayRaven embraced Finland's sharing culture to reboot Spymaster. In a games industry career spanning 20 years so far, Lasse Seppanen reckons he's experienced three distinct waves of mobile gaming. 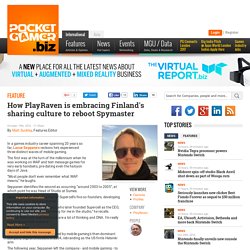 The first was at the turn of the millennium when he was working on WAP and text message games for very early handsets, pre-dating even the halcyon days of Java. “Most people don't even remember what WAP means,” he laughs. Seppanen identifies the second as occurring “around 2003 to 2005”, at which point he was Head of Studio at Sumea. Here he worked alongside four of Supercell's five co-founders, developing games for early feature phones. 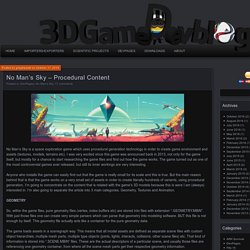 I was very excited since this game was announced back in 2013, not only for the game itself, but mostly for a chance to start researching the game files and find out how the game works. The game turned out as one of the most controversial games ever released, but still its inner workings are very interesting. Anyone who installs the game can easily find out that the game is really small for its scale and this is true.

Why video game coders don't use TDD, and why it matters. Whilst working on Sol Trader, I’ve written many unit tests for my code. 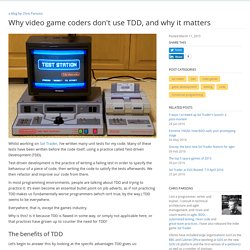 Many of these tests have been written before the code itself, using a practice called Test-driven Development (TDD). Test-driven development is the practice of writing a failing test in order to specify the behaviour of a piece of code, then writing the code to satisfy the tests afterwards. Inversion of Control Containers and the Dependency Injection pattern. In the Java community there's been a rush of lightweight containers that help to assemble components from different projects into a cohesive application. 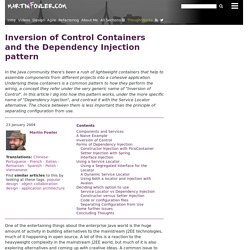 Underlying these containers is a common pattern to how they perform the wiring, a concept they refer under the very generic name of "Inversion of Control". In this article I dig into how this pattern works, under the more specific name of "Dependency Injection", and contrast it with the Service Locator alternative. Inversion of control - Wikipedia. In software engineering, inversion of control (IoC) is a design principle in which custom-written portions of a computer program receive the flow of control from a generic framework. 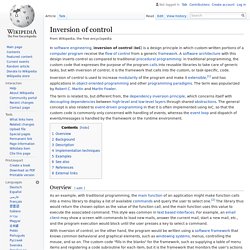 A software architecture with this design inverts control as compared to traditional procedural programming: in traditional programming, the custom code that expresses the purpose of the program calls into reusable libraries to take care of generic tasks, but with inversion of control, it is the framework that calls into the custom, or task-specific, code. Overview[edit] With inversion of control, on the other hand, the program would be written using a software framework that knows common behavioral and graphical elements, such as windowing systems, menus, controlling the mouse, and so on. InversionOfControl. Application architecture · API design · object collaboration design tags: Inversion of Control is a common phenomenon that you come across when extending frameworks. 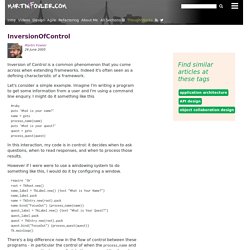 Indeed it's often seen as a defining characteristic of a framework. Let's consider a simple example. Dependency injection. Dependency injection allows a program design to follow the dependency inversion principle. The client delegates the responsibility of providing its dependencies to external code (the injector) . The client is not allowed to call the injector code.[2] It is the injecting code that constructs the services and calls the client to inject them. This means the client code does not need to know about the injecting code.

The challenge of maintaining class balance in Hearthstone's Arena mode. Class balance in video games is a delicate juggling act, and no one knows that better than the developers at Blizzard Entertainment. Last week, the studio implemented plans to balance the Arena mode of its popular digital card game Hearthstone. How to get a job at Deep Silver Fishlabs. Amazon wants to disrupt industry "locked into sequel mentality" For many of us, Amazon already controls (or at least plays a part in) numerous facets of our lives: shopping, video, music, reading, and more. Now, thanks to the acquisition of Twitch, the creation of the Lumberyard engine and the growth of its Amazon Web Services and internal game studios, the internet behemoth is poised to become a true force to be reckoned with in gaming too. Up until this point, Amazon Game Studios had largely been known for mobile titles or games for its own Fire TV platform, but at an "unboxing" event on the eve of TwitchCon, the company officially revealed three new titles - Breakaway, New World and Crucible - that represent its new community-driven approach to the AAA games business.

Bee7 takes the sting out of re-engaging daily mobile game users. Mobile marketing automation (MMA) solutions do produce significant results for those that can afford them and can deal with their complexities, but that is a tiny few. In a VB Insight study, we registered a 1.5 percent market penetration for MMA solutions among app developers. While things have improved since then, the number of practitioners is still tiny. Today, Bee7000 is launching a new re-engagement solution — Bee7 — targeted at mobile games, with a mission to provide MMA-style message delivery without the complexity, cost, or expertise typically needed. The Switched On Culture Research Group. Uk.businessinsider. The Overjustification Effect and Game Achievements. Test automation in Pet Rescue Saga - King Tech Blog.

A day in the life of a Game Art Director. The Near Miss Effect and Game Rewards. 14 videos that teach you how to monetise, retain and acquire users. In September we held the hugely popular Pocket Gamer Connects event in Helsinki to bring together games industry professionals to network, make deals and share their learnings. How to get a job at MMX Racing developer Hutch. PES vs Fifa: are licences the key to building the strongest digital football brand? Football video games are bigger and more realistic than ever as two gaming behemoths battle for domination of the sport in the digital realm – Konami’s Pro Evolution Soccer (PES) and EA Sports’ Fifa series. Top Countries by Game Revenues. Umetnički direktor Piksara: Balkanci pametni, ali na svoju štetu - B92.net. Supercell CEO Ilkka Paananen talks company culture, expansion plans, and eSports.

Insights - App Annie. F2P Economics: Inflation and the Perpetual Revenue Machine. Don Norman: Living with Complexity. $10m+ Production Budgets: Avoiding the Shark Fin. Why 'Super Mario Run' for iPhone is Nintendo’s Trojan Horse - Rolling Stone. Mobile Game Usability Testing. Get player videos in 48 hours from our tester panel - PlaytestCloud. The past, present and future of League of Legends studio Riot Games. "My biggest nightmare is waking up and realising we've not failed in a year" Google Finds That Successful Teams Are About Norms Not Just Smarts. How to repair the trust gap. How to repair the trust gap. The Underappreciated Value of Incremental Design. Re:Work - Guide: Understand team effectiveness. What Google Learned From Its Quest to Build the Perfect Team.

What other mobile shooters should learn from Glu Mobile's Rival Fire. Four lessons in emotional storytelling and plot structure from Pixar. Kabam's Next Wave: PS4 level graphics and $24 million launches. The Power of the Elastic Product Team — Airbnb’s First PM on How to Build Your Own. Fantasy Football Fix: Fantasy Premier League (FPL) optimization, price changes and statistics. An AI personal assistant who schedules meetings for you. Facebook Features Engage High Value Gamers.