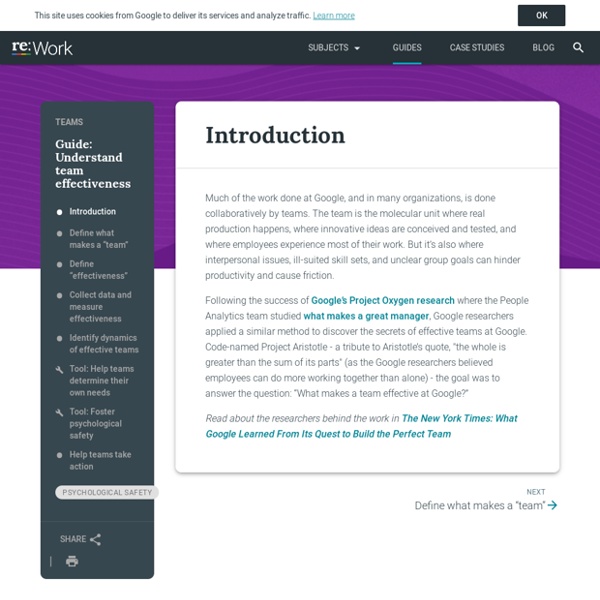 Much of the work done at Google, and in many organizations, is done collaboratively by teams. The team is the molecular unit where real production happens, where innovative ideas are conceived and tested, and where employees experience most of their work. But it’s also where interpersonal issues, ill-suited skill sets, and unclear group goals can hinder productivity and cause friction. Following the success of Google’s Project Oxygen research where the People Analytics team studied what makes a great manager, Google researchers applied a similar method to discover the secrets of effective teams at Google. Code-named Project Aristotle - a tribute to Aristotle’s quote, "the whole is greater than the sum of its parts" (as the Google researchers believed employees can do more working together than alone) - the goal was to answer the question: “What makes a team effective at Google?”

Google Finds That Successful Teams Are About Norms Not Just Smarts Which Google employees has made the biggest impact to the company over the past decade? Besides the familiar choices of Larry and Sundar, I’d nominate Google’s outgoing CPO Laszlo Bock. Under Laszlo’s direction Google’s hiring and management assumptions have been challenged by real data, resulting in transformative shifts such as *not* assuming college test scores are a predictor of success as a Googler. Another important question was “What makes a team successful (or not)?” and Google’s research into this topic was beautifully recounted in a NYTimes Magazine article earlier this year.

Guide: Identify what makes a great manager Google set out to determine what makes a manager great at Google. But first, a research team tried to prove the opposite: that managers actually don’t matter, that the quality of a manager didn’t impact a team’s performance. This hypothesis was based on an early belief held by some of Google’s leaders and engineers that managers are, at best, a necessary evil, and at worst, a layer of bureaucracy. The team defined manager quality based on two quantitative measures: manager performance ratings and manager feedback from Google’s annual employee survey. How to Make Your Business Writing Readable (With Real-Life Examples) How many times have you had a coworker ask you a question you’d already answered in an email? It’s easy to blame it on sheer laziness, but the truth is your teammates are drowning in information. Between the barrage of messenger pings, document updates, and text messages — not to mention the mind-boggling average of 121 emails a day — the average knowledge worker is just trying to keep their head above water. If they took the time to read every word they’re sent, they’d never get anything done.

✔ Effective Communication in a Team [part 2]: my 7 rules for improving interpersonal relations In my last article on communication I've discussed about my 5 general rules of communicating within a team. We talked about the importance of being prepared, of writing clearly, choosing the right communication channel... and also body language.. and even spicing it up with emoticons or memes. Now let's talk about the importance of building strong interpersonal relations with your team in order to communicate even better. As you know, my entire Nozbe team works remotely - we all work from home. That's why we decided to have an all-company meeting in person every 6 months. We've just been to one earlier this month.

The Benefits of Framing Culture as a Management System By approaching managerial decisions through the lens of culture, leaders can make a bigger impact for the organization and its employees. Corporate culture is undergoing a transformation. As organizations evolve and reinvent themselves in response to societal changes, new technologies, and competitive disruption, they’re finding that hierarchical cultures of the past must change as well. And while the shape and impact of corporate culture is changing in the 21st century, the role it can play as a determinant of success is not waning anytime soon. As the researchers of the MIT SMR/Glassdoor Culture 500 put it, “To survive and thrive in today’s market, a healthy corporate culture is more important than ever.”

How to Make Sure Your Virtual Offsite Doesn’t Suck—The Agenda and Team Meeting Tips You Need For many years now at First Round, we’ve hosted CEO Salons, which are opportunities for founders at companies we’ve backed to come together in small group settings. There’s dinner, discussion, advice from those walking a similar path — and hopefully, a stronger sense of community that can cut through the isolating fog of company building. In February 2020, Sitka CEO Kelsey Mellard walked through the doors of our San Francisco office for what turned out to be one of our last in-person salons before shelter-in-place set in. As the founder of a rapidly-growing, seed-stage healthcare communications startup, Mellard’s plate was packed. “In addition to launching new clients and growing the team, I was in the thick of planning our annual April retreat,” she says. “We’ve always been distributed, so every year we vote on what city to meet in, and fly everyone out for four days of work, bonding and strategy setting.

✔ Effective Communication in a Team - part 1: my 5 general rules Note: This article is based on my Editor’s note from the 11th issue of the Polish edition of the Productive! Magazine. Being extremely happy with the changes that we've implemented by the end of last year in the Nozbe team, I often think that there are still things that can be improved. For example... communication. Between individual departments (e.g. customer service - programmers), between heads of departments and, of course, between me and each of my employees. Especially when you work remotely like we do, good communication is key.

13 Ways to Encourage Conflict at Work Have you sabotaged your team’s results by playing peace-keeper? While no one wants to spend their time in a hostile work environment, a certain amount of conflict is healthy. It’s the friction that creates the fire. If you give your people permission to disagree respectfully, they’ll come to better solutions, solve more problems, and spot more gaps than they would if playing nice was their highest priority. Here are 13 ways to encourage healthy conflict at work. All change involves some pain.

Do Your Employees Feel Respected? Executive Summary When you ask workers what matters to them, respect from superiors often tops the list. Yet employees report more disrespectful and uncivil behavior each year. This disconnect happens in large part because leaders have an incomplete understanding of what constitutes workplace respect—and so even well-meaning efforts to provide it often fall short. The author’s research shows that employees value two distinct types of respect.