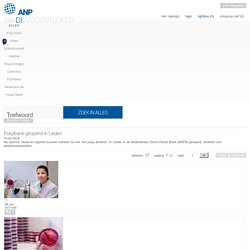 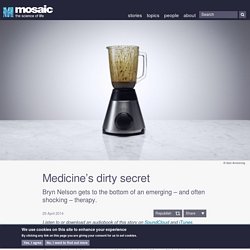 This is how far a mother will go. Your daughter has been sick for more than four years with a severe autoimmune disease that has left her colon raw with bloody ulcers. After multiple doctors and drugs have failed, you are frantic for her to get better. Then you send her disease into remission, virtually overnight, with a single act of love. “Who wouldn’t do that for their daughter?” You’ve agreed to do it again – twice – for strangers.

There are more like you, men and women who have given their loved ones a remarkable reprieve from a group of chronic conditions known as inflammatory bowel disease. You insist on “Marion” as a pseudonym. Here are the specifics: you were the donor in a faecal microbiota transplant. Poo is a decidedly imperfect delivery vehicle for a medical therapy. Some doctors have likened the recoveries of desperately ill patients to those seen with anti-HIV protease inhibitors in the mid-1990s. Poo: past and present. Six ways to transplant poo. Faecal microbiota transplants, which involve getting donor poo into patients’ bodies, are being investigated for the treatment of a number of conditions, including inflammatory bowel disease and infection with the bacterium Clostridium difficile. 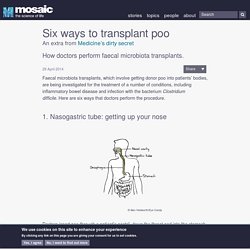 Here are six ways that doctors perform the procedure. 1. Nasogastric tube: getting up your nose Doctors insert poo through a patient’s nostril, down the throat and into the stomach using a thin, flexible feeding tube. Embraced by some clinicians who want a simple delivery method that doesn’t require sedation or a colonoscope, the technique is vigorously opposed by others. “The problem with it is, patients hate tubes stuck down their nose. The nasogastric method “should be abolished,” says Thomas Borody, founder and Director of the Centre for Digestive Diseases in Sydney, Australia. Even so, some paediatricians prefer the technique’s simplicity. Fecal Transplants May Be a Miracle Cure for Some of Our Nastiest Illnesses. For a While there, Seres Thera­peutics was the most promising name in poop. 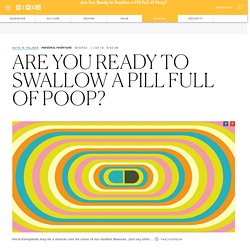 Located in Cambridge, Massa­chusetts—in the same building as Crispr Therapeutics, one of the key players in gene editing today—the biotech company has been trying to transform medicine by harnessing the billions of bacteria in people’s intestines. Those bacteria, plus others that live in and on the body, make up the human microbiome, an invisible world that is only recently coming into focus. Scientists now know that the wrong balance of bugs in your gut—a delicate ecosystem that can collapse as you age, travel, or even take new medi­cation—can lead to all sorts of distress. Seres is one of the first startups aiming to design treatments that would manipulate the microbiome to repair bad guts and cure diseases. The technical term for transferring poop from one person to another is fecal microbiota transplant, and Seres’ oral version appeared to work wonders.

The lab-built poop pill had failed. Promoting safe accessible fecal transplant. A Bitter Pill. By Arielle Duhaime-Ross | Photography by Vjeran Pavic Human feces floated in saline solution in a mortar, on a marbled countertop, in a dimly lit kitchen in Burlingame, California. 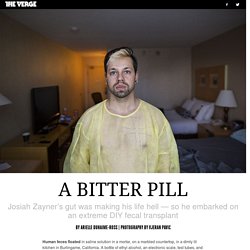 A bottle of ethyl alcohol, an electronic scale, test tubes, and a stack of well-worn pots and pans lay nearby. The stove light illuminated the area as Josiah Zayner crushed the shit with a pestle, creating a brownish-yellow sludge. "I think I can feel something hard in there," he said, laughing. It was probably vegetables — "the body doesn’t break them down all the way. " This heralded the beginning of Zayner’s bacterial makeover.

Over the course of the next four days, Zayner would attempt to eradicate the trillions of microbes that lived on and inside his body — organisms that helped him digest food, produce vitamins and enzymes, and protected his body from other, more dangerous bacteria. Zayner unwrapped a brand-new syringe and filled its barrel with the brownish liquid. FMT Evidence — OpenBiome. Table 1 References Randomized Trials 1. 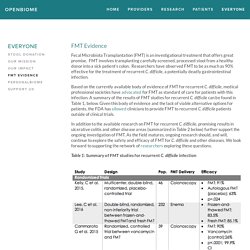