Oedipus. In the most well-known version of the myth, Oedipus was born to King Laius and Queen Jocasta. 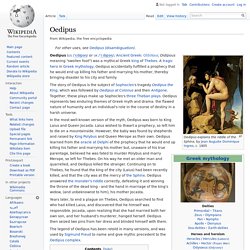 Laius wished to thwart a prophecy, so left him to die on a mountainside. However, the baby was found by shepherds and raised by King Polybus and Queen Merope as their own. Oedipus learned from the oracle at Delphi of the prophecy that he would end up killing his father and marrying his mother but, unaware of his true parentage, believed he was fated to murder Polybus and marry Merope, so left for Thebes.

On his way he met an older man and quarrelled, and Oedipus killed the stranger. Swedish divers unearth a 'Stone Age Atlantis': 11,000-year-old ancient settlement discovered under the Baltic Sea. Divers found a harpoon, tools, horns and the bones of ancient cattle The bones belonged to the animal auroch last seen in the early 1600sArchaeologists believe these relics date back to the Stone AgeIt is said to be the oldest settlement in the area - dubbed Sweden’s 'Atlantis' By Victoria Woollaston Published: 16:06 GMT, 27 January 2014 | Updated: 17:16 GMT, 27 January 2014 Divers in Sweden have discovered a rare collection of Stone Age artefacts buried deep beneath the Baltic Sea. 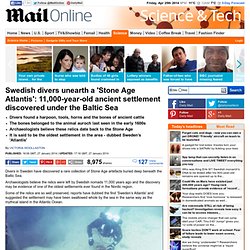 Archaeologists believe the relics were left by Swedish nomads 11,000 years ago and the discovery may be evidence of one of the oldest settlements ever found in the Nordic region. Ancient Sumerians In Ecuador: The Father Crespi Mystery… In the Amazonian Ecuadorian region called Morona Santiago there is a very deep cavern, known in Spanish as Cueva de los Tayos (Cave of the Oilbirds). 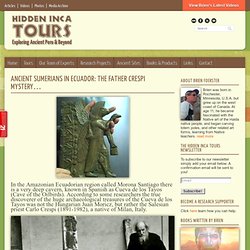 According to some researchers the true discoverer of the huge archaeological treasures of the Cueva de los Tayos was not the Hungarian Juan Moricz, but rather the Salesian priest Carlo Crespi (1891-1982), a native of Milan, Italy. Carlo Crespi, who arrived to the Amazonian Ecuador area of Cuenca in 1927, was able to win the trust of the natives Jibaro, and so they did deliver to him, over decades, hundreds of fabulous archaeological pieces dating back to an unknown time, many of them made of gold or golden, often masterfully carved with archaic hieroglyphs that, to date, no one has been able to decipher. From 1960 Crespi obtained from the Vatican the permission to open a museum in the city of Cuenca, where was located his Salesian mission. In 1962 there was a fire, and some pieces were lost forever. Full details Here Full details Here. Middle east Mythology. Creation. Mythological. Mythology. Mythology. 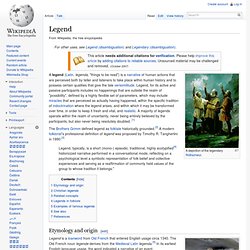 Tangherlini in 1990:[3] Legend, typically, is a short (mono-) episodic, traditional, highly ecotypified[4] historicized narrative performed in a conversational mode, reflecting on a psychological level a symbolic representation of folk belief and collective experiences and serving as a reaffirmation of commonly held values of the group to whose tradition it belongs. " Etymology and origin[edit] Legend is a loanword from Old French that entered English usage circa 1340. The Old French noun legende derives from the Medieval Latin legenda.[5] In its earliest English-language usage, the word indicated a narrative of an event. 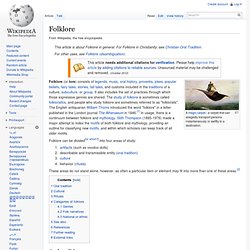 Folklore can be divided[by whom?] Into four areas of study: artifacts (such as voodoo dolls)describable and transmissible entity (oral tradition)culturebehavior (rituals) These areas do not stand alone, however, as often a particular item or element may fit into more than one of these areas.[2] Oral tradition[edit] While folklore can contain religious or mythic elements, it equally concerns itself with the sometimes mundane traditions of everyday life. Sometimes "folklore" is religious in nature, like the tales of the Welsh Mabinogion or those found in Icelandic skaldic poetry. "Folktales" is a general term for different varieties of traditional narrative. Contemporary narratives common in the Western world include the urban legend.