Conductors and Insulators. In a conductor, electric current can flow freely, in an insulator it cannot. 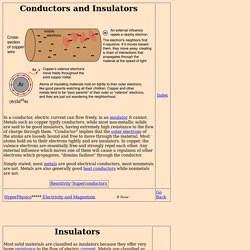 Metals such as copper typify conductors, while most non-metallic solids are said to be good insulators, having extremely high resistance to the flow of charge through them. "Conductor" implies that the outer electrons of the atoms are loosely bound and free to move through the material. Most atoms hold on to their electrons tightly and are insulators. In copper, the valence electrons are essentially free and strongly repel each other. Where to Insulate in a Home. Types of Insulation. Insulation. Insulation. Insulation acts as a barrier to heat flow and is essential for keeping your home warm in winter and cool in summer. 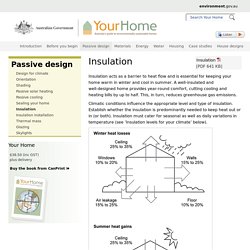 A well-insulated and well-designed home provides year-round comfort, cutting cooling and heating bills by up to half. This, in turn, reduces greenhouse gas emissions. Climatic conditions influence the appropriate level and type of insulation. Establish whether the insulation is predominantly needed to keep heat out or in (or both). Insulation must cater for seasonal as well as daily variations in temperature (see ‘Insulation levels for your climate’ below). Source: SEAV 2002 Typical heat losses and gains without insulation in a temperate climate. 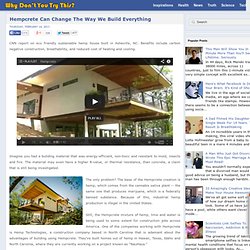 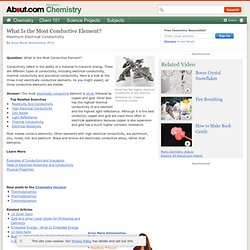 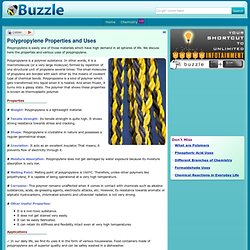 Hemp waste fibers form basis of supercapacitor more conductive than graphene. Comprised of a lone hexagonal honeycomb lattice layer of tightly packed carbon atoms, graphene is one of the strongest, lightest, and most conductive compounds ever discovered. 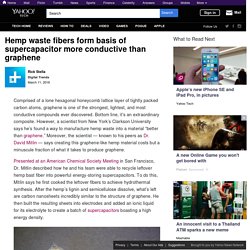 Bottom line, it’s an extraordinary composite. However, a scientist from New York’s Clarkson University says he’s found a way to manufacture hemp waste into a material “better than graphene.” Moreover, the scientist — known to his peers as Dr. David Mitlin — says creating this graphene-like hemp material costs but a minuscule fraction of what it takes to produce graphene. Presented at an American Chemical Society Meeting in San Francisco, Dr. Wonder Material Mimics Desert Beetles and Cacti To Suck Water Out of Thin Air. Inspired by a beetle's shell, a cactus spine, and the skin of a carnivorous plant, this slick, bumpy coating is a material straight out of Dune or Star Wars. 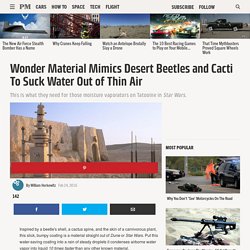 Put this water-saving coating into a rain of steady droplets it condenses airborne water vapor into liquid 10 times faster than any other known material. "Imagine this kind of condensation system being used simply for water collection on a moisture farm, such as the one on Tatooine where Luke Skywalker was raised" Advertisement - Continue Reading Below Mechanical engineer Kyoo-Chul Park led the team of researchers that developed this new coating, which is outlined in a study in the journal Nature this week.

Such a material would be quite useful in any machine with a heat exchanger that relies on water collection for heat transfer. Time-lapsed images of droplets condensed on slippery surfaces. Scientists Invent a New, Lighter Steel That's as Strong as Titanium. From shipping containers to skyscrapers to turbines, good old steel is still the workhorse of our modern world. 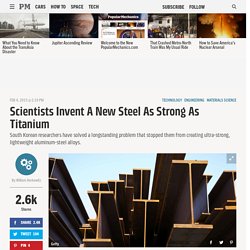 Now, scientists are discovering new secrets to make the material better, lighter, and stronger. Today a team of material scientists at Pohang University of Science and Technology in South Korea announced what they're calling one of the biggest steel breakthroughs of the last few decades: an altogether new type of flexible, ultra-strong, lightweight steel. This new metal has a strength-to-weight ratio that matches even our best titanium alloys, but at one tenth the cost, and can be created on a small scale with machinery already used to make automotive-grade steel. The study appears in Nature. "Because of its lightness, our steel may find many applications in automotive and aircraft manufacturing," says Hansoo Kim, the researcher that led the team. Metal Foam Obliterates Bullets – and That’s Just the Beginning. Composite metal foams (CMFs) are tough enough to turn an armor-piercing bullet into dust on impact. 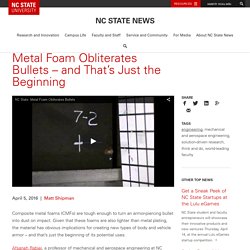 Given that these foams are also lighter than metal plating, the material has obvious implications for creating new types of body and vehicle armor – and that’s just the beginning of its potential uses. Afsaneh Rabiei, a professor of mechanical and aerospace engineering at NC State, has spent years developing CMFs and investigating their unusual properties. The video seen here shows a composite armor made out of her composite metal foams. The bullet in the video is a 7.62 x 63 millimeter M2 armor piercing projectile, which was fired according to the standard testing procedures established by the National Institute of Justice (NIJ). And the results were dramatic. “We could stop the bullet at a total thickness of less than an inch, while the indentation on the back was less than 8 millimeters,” Rabiei says. Scientists have turned cooking oil into a material 200 times stronger than steel.

Researchers have found a way to turn cheap, everyday cooking oil into the wonder material graphene - a technique that could greatly reduce the cost of making the much-touted nanomaterial. 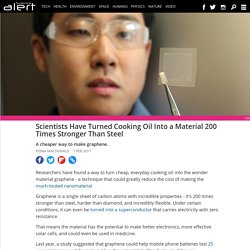 Graphene is a single sheet of carbon atoms with incredible properties - it's 200 times stronger than steel, harder than diamond, and incredibly flexible. Under certain conditions, it can even be turned into a superconductor that carries electricity with zero resistance. That means the material has the potential to make better electronics, more effective solar cells, and could even be used in medicine. Last year, a study suggested that graphene could help mobile phone batteries last 25 percent longer, and the material has the potential to filter fuel out of thin air. But these applications have been limited by the fact that graphene usually has to be made in a vacuum at intense heat using purified ingredients, which makes it expensive to produce.