Nigeria: President Buhari to Implement Policies to Make Nigeria Self-Sufficient in Food Production. By Tobi Soniyi Abuja — President Muhammadu Buhari has said his administration will vigorously implement policies that will revive Nigeria's agricultural sector and reposition it as the mainstay of the national economy. 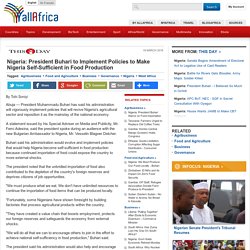 A statement issued by his Special Adviser on Media and Publicity, Mr. Femi Adesina, said the president spoke during an audience with the new Bulgarian Ambassador to Nigeria, Mr. Vesselin Blagoer Delcher. Buhari said his administration would evolve and implement policies that would help Nigeria become self-sufficient in food production because continued importation of food could expose the country to more external shocks. The president noted that the unbridled importation of food also contributed to the depletion of the country's foreign reserves and deprives citizens of job opportunities. "We must produce what we eat. "Fortunately, some Nigerians have shown foresight by building factories that process agricultural products within the country. Buhari, who also received Mr. Nigeria: W'Bank Report - Country's Booming Population Requires More, Better Jobs.

By Abimbola Akosile Three World Bank reports have revealed that with over 170 million people and a high rate of population growth, Nigeria needs to create 40 to 50 million additional jobs between 2010 and 2030. 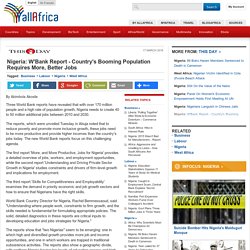 The reports, which were unveiled Tuesday in Abuja noted that to reduce poverty and promote more inclusive growth, these jobs need to be more productive and provide higher incomes than the country's jobs today. The new World Bank reports focus on this challenging agenda. The first report 'More, and More Productive, Jobs for Nigeria' provides a detailed overview of jobs, workers, and employment opportunities, while the second report 'Understanding and Driving Private Sector Growth in Nigeria' studies constraints and drivers of firm-level growth and implications for employment. The third report 'Skills for Competitiveness and Employability' examines the demand in priority economic and job growth sectors and how to ensure that Nigerians have the right skills. Nigeria govt considers 9% communication service tax - Extensia.

The Nigerian government is planning to introduce a 9% communication service tax to be paid by consumers of voice, data, SMS, MMS and pay TV services. 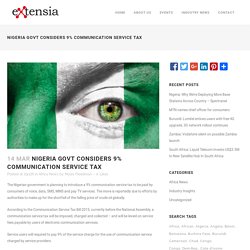 The move is reportedly due to efforts by authorities to make up for the shortfall of the falling price of crude oil globally. According to the Communication Service Tax Bill 2015, currently before the National Assembly, a communication service tax will be imposed, charged and collected – and will be levied on service fees payable by users of electronic communication services. News@10: Swiss Government To Return Abacha Loot 08/03/16 Pt.2. Naija247news - Nigeria’s economic growth slows to 2.11 pct as manufacturing sinks deeper into recession. Growth in Nigeria, Africa’s biggest economy, slowed in the fourth quarter as oil prices fell and manufacturing sank deeper into recession. 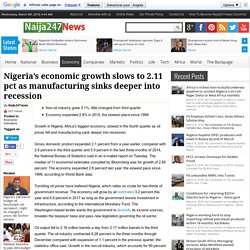 Gross domestic product expanded 2.1 percent from a year earlier, compared with 2.8 percent in the third quarter and 5.9 percent in the last three months of 2014, the National Bureau of Statistics said in an e-mailed report on Tuesday. The median of 11 economist estimates compiled by Bloomberg was for growth of 2.85 percent. The economy expanded 2.8 percent last year, the slowest pace since 1999, according to World Bank data. Tumbling oil prices have battered Nigeria, which relies on crude for two-thirds of government revenue. The economy will grow by an estimated 3.2 percent this year and 4.9 percent in 2017 as long as the government boosts investment in infrastructure, according to the International Monetary Fund. 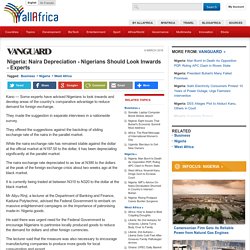 They made the suggestion in separate interviews in a nationwide survey. They offered the suggestions against the backdrop of sliding exchange rate of the naira in the parallel market. While the naira exchange rate has remained stable against the dollar at the official market at N197.50 to the dollar, it has been depreciating significantly at the parallel market. The naira exchange rate depreciated to as low at N390 to the dollars at the peak of the foreign exchange crisis about two weeks ago at the black market. REVEALED: Nigeria has at least 770 billionaires. Despite the fall of the naira and plunge in crude oil prices, Nigeria still boasts least 770 naira-billionaires whose wealth is valued above $10 million (N1.98 billion) each. 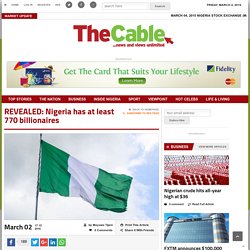 The economy of the nation, though, has taken a toll on the number of billionaires, with about 50 billionaires dropping off the list in 2015. According to the revered Knight Frank wealth report 2015 obtained by TheCable on Wednesday – with contributions from Nigerian billionaire, Tony Elumelu – Nigeria’s billionaires are expected to rise to 1,080 by 2025. The report says over 15,400 dollar-millionaires were from Africa’s largest economy in 2015, falling by 16,400 people in 2014 and 5,500 in 2005. According to the report, Nigeria’s richest live predominantly in two cities: Lagos and Abuja. 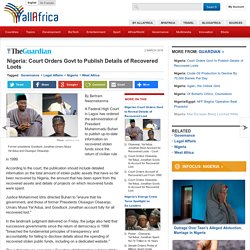 By Bertram Nwannekanma A Federal High Court in Lagos has ordered the administration of President Muhammadu Buhari to publish up-to-date information on recovered stolen funds since the return of civilian rule in 1999. According to the court, the publication should include detailed information on the total amount of stolen public assets that have so far been recovered by Nigeria, the amount that has been spent from the recovered assets and details of projects on which recovered funds were spent. Justice Mohammed Idris directed Buhari to "ensure that his government, and those of former Presidents Olusegun Obasanjo, Umaru Musa Yar'Adua, and Goodluck Jonathan account fully for all recovered loot. " Nigeria cuts £8m from state's payroll after non-existent workers removed.

Nigeria has removed more than 20,000 non-existent workers from the government payroll following an audit, leading to savings of 2.29bn naira (£8.3m) from its monthly wage bill, the finance ministry has said. 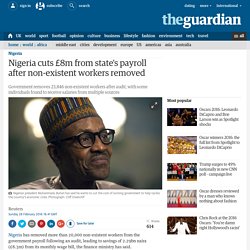 Corruption and mismanagement have long stunted development in Africa’s biggest economy and top oil producer, and are now exacerbating the impact of a sharp fall in global crude prices. The audit used biometric data and a bank verification number (BVN) to identify holders of bank accounts into which salaries were being paid. This showed the names of some civil servants receiving a salary did not correspond to the names linked to the bank accounts. In some cases individuals were also receiving salaries from multiple sources. “The federal government has removed 23,846 non-existent workers from its payroll,” said Festus Akanbi, special adviser to finance minister Kemi Adeosun who took office in November and soon after set up an efficiency unit to cut waste.

Nigeria government's audit removes nearly 24,000 non-existent workers. Image copyright AFP The Nigerian government has removed nearly 24,000 workers from its payroll after an audit revealed they did not exist, the Finance Ministry has said. 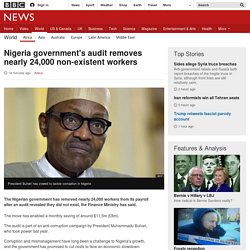 The move has enabled a monthly saving of around $11,5m (£8m). The audit is part of an anti-corruption campaign by President Muhammadu Buhari, who took power last year. Corruption and mismanagement have long been a challenge to Nigeria's growth, and the government has promised to cut costs to face an economic slowdown. The days of Nigeria as a big oil producer with plenty of money are gone - Buhari. By Levinus Nwabughiogu ABUJA – President Muhammadu Buhari Thursday in Mecca stated that the Nigeria that was seen a big producer of oil had gone, stating that the country needed all the support from interesting partners to diverse and develop her economy. 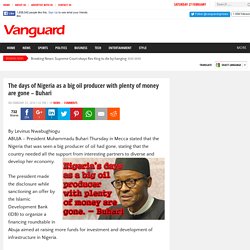 The president made the disclosure while sanctioning an offer by the Islamic Development Bank (IDB) to organize a financing roundtable in Abuja aimed at raising more funds for investment and development of infrastructure in Nigeria. The president spoke at a meeting with the President of the IDB, Dr. Ahmed in Saudi Arabia. “The days of Nigeria as a big oil producer with plenty of money are gone. We need all the support we can get to diversify our economy as quickly as possible. “We also need to rehabilitate our infrastructure, develop the domestic capacity to feed ourselves and export the surplus,” he said. Speaking earlier, Dr. Nigeria’s President to Punish Those Who Altered 2016 Budget. Nigerian President Muhammadu Buhari vowed to punish those who made unauthorized alterations to the 2016 budget proposal that he presented in December, after civic groups criticized the spending plan for being riddled with errors and wasteful provisions.

“The culprits will not go unpunished,” Buhari told an audience of Nigerians in Riyadh late Tuesday, according to a statement from his office. “Our Minister of Budget and National Planning did a great job with his team. The minister became almost half his size during the time, working night and day to get the budget ready, only for some people to pad it.” Telecoms giant MTN pays $250 mn in Nigeria fine dispute. Johannesburg (AFP) - South African telecoms giant MTN said Wednesday it had paid $250 million to the Nigerian government in a dispute over a $3.9-billion fine imposed last year for failing to disconnect unregistered users.

Untitled. By Ladi Olorunyomi Fourteen months after a U.S. army-led combat training for Nigerian soldiers was aborted, American authorities have announced a resumption of the programme. The American Assistant Secretary of State for Africa, Linda Thomas-Greenfield, said, Tuesday, that the training would resume this February. Speaking on U.S. strategy against Boko Haram at a meeting in Washington DC, Ms. Thomas-Greenfield said U.S. expects would "inaugurate the first round of training for an infantry battalion later this month. " The resumed training program is part of a broad U.S. strategy against the terror group and, part of the new deal the Obama administration entered with President Muhammadu Buhari during his official trip to America last July. "Our counter Boko Haram Strategy is an integrated, interagency effort to help Nigeria and its neighbors in their fight to degrade and ultimately to defeat Boko Haram", said Ms.

While Ms. Ms. Buhari: President sacks NAFDAC boss, 19 others. The affected officials include the chief executives of six agencies under the Federal Ministry of Information and Culture whose dismissal was announced earlier. The other 20, according to a statement released by the Secretary to the Government of the Federation (SGF), Babachir Lawal, are: The six whose disengagement was announced earlier are the Directors-General of NTA, Sola Omole; FRCN, Ladan Salihu; VON, Sam Worlu; NOA, Mike Omeri; NBC, Emeka Mba and the Managing Director of NAN,Ima Niboro. Nigeria to prosecute 23,000 'ghost workers' - Finance minister. Nigerian Government Plans Performance-Based Pay Package for Customs.

The federal government said on Tuesday it was considering a performance-based pay structure for the Nigerian Customs Service (NCS) to motivate its personnel towards improved revenue collection and reduced corruption. The Minister of Finance, Kemi Adeosun, who gave the hint, said a review of the constraints currently impacting NCS' performance had been concluded. She said the review had found that lack of modern equipment, inappropriate waivers and poor remuneration were top of the issues affecting the effective performance by the service. Nigeria may lose 37% of GDP to corruption, says report. Nigeria: Forex Restrictions - Nigerians Throng Ghana, Togo, Benin to Source Dollars. MTN opts to settle Nigeria fine out of court.

Telecommunications network provider MTN has been granted a lifeline to settle its $3,9 billion fine out-of-court with Nigerian authorities, the company said on Friday. Buhari Sets March 31 Deadline For Compilation Of List Of Nigerian Officials With Assets In UAE. SaharaReporters has learned that President Muhammadu Buhari has ordered the Nigerian Embassy in the United Arab Emirates (UAE) to investigate, document, and submit the list of all Nigerian public officials with assets in the UAE.

Our sources said Mr. Stealing From Nigeria: The Numbers Are Mind Boggling And No One's Denying It. Buhari. FG Alleges 1.34trn Naira Stolen By 55 People In 7 Years. Nigerian Army To Double In Size. The Nigerian Army will expand its current size of just over 100,000 to 209,000, Chief of Army Staff Lieutenant General Tukur Buratai announced during a speech at the National Defence College on 13 January.