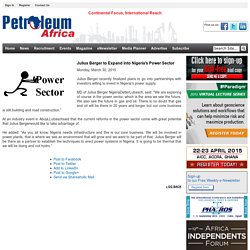 MD of Julius Berger NigeriaDetlerLubasch, said: “We are exploring of course in the power sector, which is the area we see the future. We also see the future in gas and oil. There is no doubt that gas and oil will be there in 20 years and longer but our core business is still building and road construction.” At an industry event in Abuja,Lubaschsaid that the current reforms in the power sector come with great potential that Julius Bergerwould like to take advantage of. He added: “As you all know, Nigeria needs infrastructure and this is our core business. 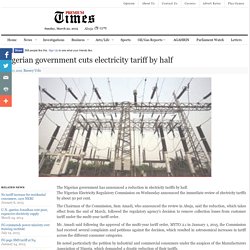 The Nigerian Electricity Regulatory Commission on Wednesday announced the immediate review of electricity tariffs by about 50 per cent. The Chairman of the Commission, Sam Amadi, who announced the review in Abuja, said the reduction, which takes effect from the end of March, followed the regulatory agency’s decision to remove collection losses from customer tariff under the multi-year tariff order. Mr. Amadi said following the approval of the multi-year tariff order, MYTO 2.1 in January 1, 2015, the Commission had received several complaints and petitions against the decision, which resulted in astronomical increases in tariff across the different consumer categories. Only manufacturing, agric revolution can save Nigeria- Dangote chief. The unprecedented crash of the crude oil price in the international market and subsequent devaluation of the Naira has been described as a pointer to the fact that the salvation of the Nigerian economy in the future depends on massive agricultural revolution and local manufacturing. 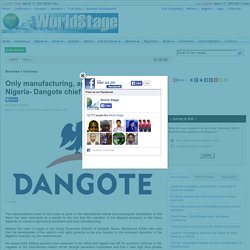 Making this claim in Lagos is the Group Executive Director of Dangote Group, Devakumar Edwin who said that the development of the nation's vast agric potential is the only solution to the incessant distortion to the Nigeria's economy by the market forces. He stated while fielding question from newsmen in his office that Nigeria has left its economic fortunes to the vagaries of the international market forces through excessive importation and that it was high time private investors latched in on this situation and help the government out by going serious agriculture and manufacturing. "The same scenario played out in cement sector.

How Recalculating GDP Can Help App Designers In Nigeria : Planet Money. If you're trying to grow a business in Nigeria and you want investors, you want Nigeria's economy to look as big as possible. 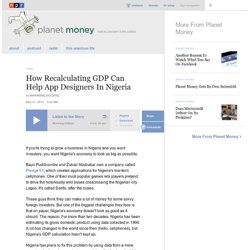 Bayo Puddicombe and Zubair Abubakar own a company called Pledge 51 , which creates applications for Nigeria's low-tech cellphones. One of their most popular games lets players pretend to drive the notoriously wild buses crisscrossing the Nigerian city Lagos. Nigeria’s Brand Valuation Up By 19 % Nigeria: Real GDP growth in West Africa to be higher in 2015 despite Ebola. Nigeria: Real GDP growth in West Africa to be higher in 2015 despite Ebola Abuja, Nigeria (PANA) - Economic growth in the West African sub-region in 2015 is expected to be impressive despite the impact of the Ebola Virus Disease (EVD) which is currently ravaging some countries in the region, a senior West African official has said. ''With regards to the economic situation in the sub-region, real GDP growth is expected to reach 7.1% in 2015, as against 6.3% in 2014,'' said the Chair of the ECOWAS Council of Ministers, Hanna Serwaa Tetteh. ''This compares favourably with Eastern and Southern African regions whose growth rates in 2915 are projected at 6.2% and 4.4% respectively,'' PANA Wednesday quoted him as saying at the ongoing 73rd session of the Council at the ECOWAS Commission headquarters in Abuja, the Nigerian capital. ''This is based on the expectation that the epidemic will be contained by the end of December 2014,'' Tetteh said. 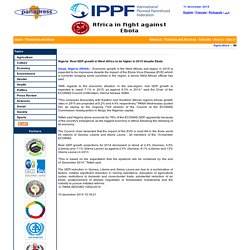 NLNG to build $1.8b ship repair facility in Lagos - The Nation. The Nigeria Liquified Natural Gas (NLNG) in collaboration with other investors are set to invest $1.8billion in ship repair and dry docking business in the country to boost the economy and increase trade. 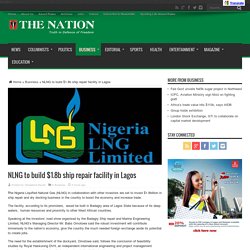 The facility, according to its promoters, would be built in Badagry area of Lagos State because of its deep waters, human resources and proximity to other West African countries. Speaking at the investors’ road show organised by the Badagry Ship repair and Marine Engineering Limited, NLNG’s Managing Director Mr. Naira devaluation: CBN withdraws N300bn from circulation. The Central Bank of Nigeria (CBN) has withdrawn N300 billion from the banking system to support the naira, which has been hit by falling oil prices. 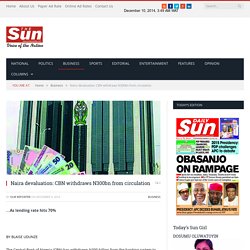 The development made the overnight rate to spike to 30 per cent on Friday, up from 12 per cent last week. This was as overnight lending rate more than doubled to a record high of 70 per cent on Monday, amid a cash squeeze after the apex bank soaked up naira liquidity to support the ailing currency, dealers said. CBN is struggling to prop up the naira, which has taken a hit over the past few months as falling oil prices shook confidence in the assets of Africa’s leading energy producer. Oil hit a five-year low on Monday. “Banks are scrambling for funds to cover their positions,” one dealer said. The naira eased 1.1 per cent on Monday, below the central bank’s new target since an 8 per cent devaluation two weeks ago to save declining foreign reserves, despite the bank selling dollars onto the market.

Business in Nigeria: Africa’s testing ground. Nigeria among top 3 for FDI. Nigeria remains one of the top three destinations for Foreign Direct Investment, FDI, in Africa, despite current challenges, the United Nations Conference on Trade and Development, UNCTAD, has said. 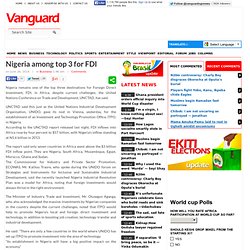 UNCTAD said this just as the United Nations Industrial Development Organisation, UNIDO, gave its nod in Vienna, yesterday, for the establishment of an Investment and Technology Promotion Office, ITPO, in Nigeria. According to the UNCTAD report released last night, FDI inflows into Africa rose by four percent to $57 billion, with Nigeria’s inflow standing at N5.6 billion in 2013. The report said only seven countries in Africa went above the $3 billion FDI inflow point. Nigeria’s middle class jumps six-fold to 23m in 14 years – Standard Bank. Nigeria’s middle class jumped six-fold in 14 years as economic growth spiked between 2000-2014 with the return to democracy and increase in private sector investments, according to Standard Bank in a new report. 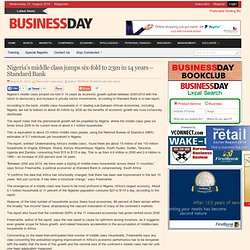 According to the bank, middle class households in 11 leading sub-Saharan African economies, including Nigeria, are set to balloon to about 40 million by 2030 as the benefits of economic growth are more inclusively distributed. The report notes that the phenomenal growth will be propelled by Nigeria, where the middle class grew six times since 2000 to its current level of about 4.1 million households.

This is equivalent to about 23 million middle class people, using the National Bureau of Statistics (NBS) estimates of 5.7 individuals per household in Nigeria. “Between 2000 and 2014, we have seen a tripling of middle-class households across these 11 countries,” says Simon Freemantle, a political economist at Standard Bank in Johannesburg, South Africa. PATRICK ATUANYA with wire report.

Nigeria’s 10 Most Top Companies In A Lineup - Dangote, Indorama Eleme Petrochemicals, Firstbank Group, MTN, Nigerian Breweries Plc, UAC Plc, top the list of 100 companies which have contributed to the development of Nigeria’s economy Aliko Dangote THE federal government is getting set to celebrate companies which have huge investment portfolio in the Nigerian economy soon. 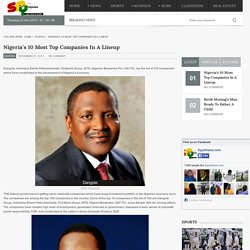 Lagos Hopes Technology Can Help Manage Challenges. For Lagos, Nigeria, Africa’s biggest city, any push to become a smart city will have to adapt to constant—and often unplanned—growth. Its challenges are epic. The United Nations predicts that Lagos’s population—which the U.N. estimates at 12.6 million today, though other estimates are as high as 22 million—will almost double between now and 2030, greatly adding to demands on already strained services. ‘90% Nigerian businesses ride on technology for growth’ OVER 90 per cent of business leaders in Nigeria have identified information technology as a strategic lever for business growth, according to EMC Corporation.

EMC Corporation, a global leader in enabling businesses and service providers, in a survey carried out on 528 business and technology decision makers across Nigeria’s private and public sectors, revealed that more than 80 per cent of respondents agreed that their organisations recognise the increasing role of automation, such as software defined storage, as critical to business growth.

The study also found that about 96 per cent of respondents expect next-generation technologies such as mobile, social, cloud computing and big data to give their organisations a competitive advantage, and that these new technologies will impact key aspects of business, including improving customer experience, managing mission-critical business operations and building new products and services.

“Consumer expectations have undergone a radical shift. Trancorp To Commence Construction Of $140m Hotel In Lagos. VENTURES AFRICA – Transcorp Hotels Plc. (THP) will begin the construction of its $140 million Lagos hotel in two weeks. The 300 room inn will be built on a 6,000 square metre land acquired on Glover Road, Ikoyi, one of the more luxurious areas of Nigeria’s commercial capital Lagos. This project in accordance with its business expansion agenda, is a response to the demand for expanded capacity and enhanced hospitality quality in service delivery.

Valentine Ozigbo, CEO, Transcorp Hotels Plc in a recent interview with BusinessDay, said the company had concluded agreements for construction to begin. He also explained that the expansion process will increase the demand for hotels especially in the under-served Lagos market. Transcorp recently concluded an N8 billion public offer in September, which it later revealed was oversubscribed. About Felicia Omari Ochelle Felicia Omari Ochelle is a staff writer of Ventures Africa. Nigeria In Focus Special: Finance, Power, Agriculture, Petroleum. Nigeria middle class growth seen largest in Africa by 2030. Middle-class households in 11 leading economies in the region are set expand to about 40 million by 2030, with the biggest growth seen in Nigeria, the continent’s largest economy, according to a report by Standard Bank Group Ltd. Africa’s gross domestic product may expand by 50 percent to $3.7trn by 2019, boosted by an emerging middle class and increased household demand, according to Deloitte.

“Rising consumer demand, aligned with annual growth of around 8 percent is likely to add around $1.1 trillion to African GDP by 2019, with Ethiopia, Uganda and Mozambique among the fastest expanding markets,” the auditing company said in an e-mailed report Tuesday. Sub-Saharan Africa is forecast to grow 5 percent this year, driven by infrastructure investment, a buoyant services sector and strong agriculture production, the International Monetary Fund said last month.

The city ranks fifth in Africa in terms of overall visitor expenditure below Johannesburg (US$3.20 billion), Cape Town (US$2.25 billion), Cairo (US$804 million) and Casablanca (US$737 million). $1.55bn Lekki port project targets 2018 as business commencement date. Lekki deep seaport, Nigeria’s biggest seaport project estimated to cost over $1.55 billion worth of investment capital, has set 2018 as its business commencement date as well as operational take-off date. This is as the construction work of the port project has been estimated to take a total of 47 months. Nigeria Export Processing Zones Authority - Registered Free Zones in Nigeria. Lagos generates 20% of Nigeria’s GDP –Fashola. Lagos State Gover­nor, Mr. Babatunde Fashola (SAN), has disclosed that Lagos state alone generates about 20 per cent of Nigeria’s Gross Domestic Product (GDP).

Fashola who was repre­sented by State’s Commis­sioner for Commerce, Mrs. ‘Nigeria to earn $1.6tr from non-oil exports in five years’ How diverse is Nigeria's economy across state lines? A breakdown of Africa's largest economy into its 36 states shows striking differences. Poorer states need to expand their revenue bases to catch up. Having become Africa's largest economy with a gross domestic product (GDP) of more than $500bn this year, Nigeria has been living up to its claims to represent the continent's diversity – economically, politically and culturally. closer integration of neighbouring south-west states as the first step in creating a larger regional market for development, trade and investment That diversity becomes clear in any research on conditions in Nigeria's 36 states.