"African countries have long used the guideline of a 60:40 division between sciences/engineering and arts/humanities, agreed to in
1962 at a UNESCO/UNECA regional higher education conference in Antananarivo, Madagascar, as a reference for graduate output"

How Dow Chemical is turning sewage into a refreshing drink. “This is step one of the filtration process,” says Snehal Desai, struggling to suppress his gag reflex. 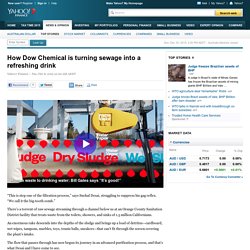 “We call it the big-tooth comb.” There’s a torrent of raw sewage streaming through a channel below us at an Orange County Sanitation District facility that treats waste from the toilets, showers, and sinks of 1.5 million Californians. 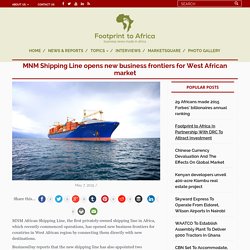 BusinessDay reports that the new shipping line has also appointed two subsidiaries – Sifax Shipping Nigeria Limited and Sifax Ghana Limited – as its official agents in Nigeria and Ghana, respectively. It added that the shipping line made its first call at Barcelona port last week with “Orient Spirit” vessel, and will begin a bi-weekly shipping service that will service ports in Southern Europe, Morocco and the West Coast of Africa. Some of the ports the new shipping line, which is the only African container line, would be servicing include those of Barcelona, Sagunto, Tangier, Casablanca, Agadir, Nouakchott, Dakar, Conakry, Lagos, Tema, and Abidjan. 6 Astounding Ways Africa Is Paving the Way for the Future of Technology.

Every week, the American tech sector uses the most advanced mobile technologies in the world to create some new meaningless distraction. 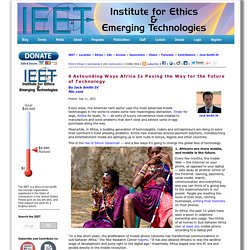 Tinder for dogs, Airbnb for boats, Yo — all sorts of luxury convenience tools created to manufacture and solve problems that don’t exist and extract some in-app purchases along the way. Meanwhile, in Africa, a budding generation of technologists, coders and entrepreneurs are rising to solve their continent’s most pressing problems. 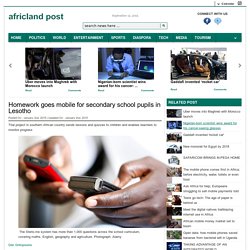 Phones of this type have more than 86% penetration in Lesotho. The programme is undergoing trials in local schools, supported by the Vodacom Foundation, the ministry of education and the local teachers’ union, before being rolled out across the country. The project was started by Christopher Pruijsen, Danielle Reid and Dean Rotherham during the 2013 StartupBus Africa hackathon, run by ampion.org. “We originally saw the potential to use something as simple as a mobile phone to deliver powerful information, especially across literacy, internet access and device barriers,” says Pruijsen, now CEO of Sterio.me. “We also wanted to make sure that the experience was simple and effective for teachers, by saving them time creating, distributing and marking homework.” When the programme is running, students receive a call covering the day’s work. Women in Maritime - 2015 Is Africa's Year for Change. Analysis By Timothy Walker On 26 August, Lieutenant Commander Zimasa Mabela took command of the SAS Umhloti, a South African Navy Mine Counter Measure Vessel. 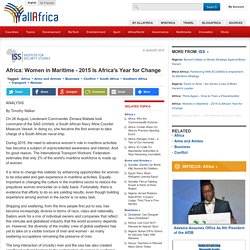 In doing so, she became the first woman to take charge of a South African naval ship. During 2015, the need to advance women's role in maritime activities has become a subject of unprecedented awareness and interest. Apps for Africa - Changing the lives of the the last billion. Artificial Intelligence Catches Fire in Ethiopia  The app that could transform Africa's e-commerce by solving its postcode problem - and with just three little words.

Have you ever struggled to explain to someone exactly where you are? 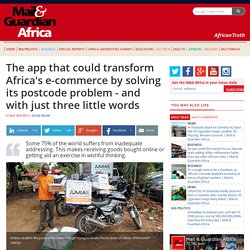 UK startup What3Words is trying to make that problem a thing of the past. It has divided up the entire world into a grid of 57 trillion small plots of land, each associated with a sequence of three random words. So tourists in London can use “casino.coach.bikes” as shorthand for “meet me on the nose of the lion sculpture at the south-west side of Nelson’s Column in Trafalgar square.” Tech Communities in Francophone Africa Rise to the Challenge of Their Anglophone Counterparts. Four tech communities that are blossoming in Africa: Akendewa CIV, Habaka, Mg; Qelasy, CIV; JokkoLabs, SEN) In recent years, stories of an “African technological renaissance” and extraordinary promises of the “Silicon Savannah” and other technology centres in Sub-Saharan Africa have been abundant in the media. 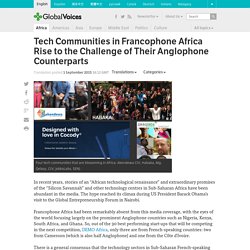 The hype reached its climax during US President Barack Obama’s visit to the Global Entrepreneurship Forum in Nairobi. Francophone Africa had been remarkably absent from this media coverage, with the eyes of the world focusing largely on the prominent Anglophone countries such as Nigeria, Kenya, South Africa, and Ghana. La première hydrolienne flottante installée dans la Garonne  Nigeria's Wecyclers, the Lagos-based recycling start-up, wins $55,000 from Steve Case Foundation. What is happening? 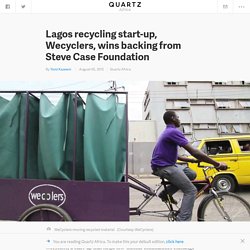 Why is China—the country that people once thought was the engine of the world economy—tottering so badly? To answer these questions it is necessary to recognize that China was never the engine of the world’s growth. To be such an engine you have to import more than you export. Then you would create a demand that is filled by other countries, which as a result export more than they import. Importers are the engines in the supply trains of the international markets. Agritools, l’Afrique de l’agriculture, des start-up et de ses jeunes dirigeants. Des mutations extraordinaires se produisent sur le continent africain et l’innovation technologique est l’un des protagonistes de ce changement. 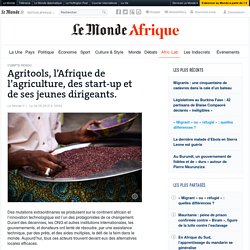 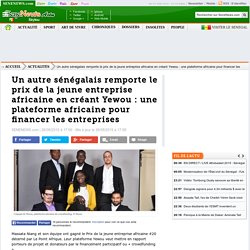 It finds the vast majority of business decision makers are dedicating more time and attention to understanding the strategic implications of disruptive technologies. While nearly 70 percent of global managers surveyed by the BPI Network believe technology has become ³far more important² to their business, less than half (47 percent) of the 250 executives polled rate the level of innovation in their IT groups as good or very high. How Africa can show the world the way to a low-carbon future: 10 facts, 10 actions. Africa’s energy challenges are immense. Power shortages diminish the region’s growth by 2-4 percent a year, holding back efforts to create jobs and reduce poverty. In addition, despite a decade of growth, the power generation gap between Africa and other regions is widening.

Can we stave off catastrophic climate change while building the energy systems needed to power growth, create jobs, and lift millions of people out of poverty? African Startup Plans Hybrid Car Line - Frontier Markets News - Emerging & Growth Markets. Made in Africa? Why Not? New countries are making the case they can be good homes for manufacturers, a change that China will have to adapt to In the search for competitive costs and acceptable quality, new actors continuously take center stage. There's always an unforeseen producer, an emerging country ready to offer more advantageous conditions to attract multinationals' investments. The combination is unchanging: low costs and favorable business climates. The affirmation of a few African countries in textile manufacturing is only the latest example of the sector's mobility.

M. SnooCode: A solution to the lack of formal addresses in Ghana and beyond. Sesinam Dagadu has a simple, yet effective, solution for the lack of formal addresses in Ghana. SnooCode is a mobile app that uses a computer algorithm to generate a unique code – for any location – which then serves as an address. Ghanaian Sesinam Dagadu (29) is what some might call an accidental entrepreneur – meaning the business created the entrepreneur, not the other way around. Horn Program staff members travel to Kenya to support young entrepreneurs. E-book_ACU.pdf. Bill Gates’ Poop Water Machine Now Working in Africa with Promising Results. Maasai women are the new solar warriors of Africa. Qelasy, la première tablette éducative venue d'Afrique. A Nairobi, on paie son Uber sans carte bancaire. Egyptian teenager figures out how to turn plastic waste into $78 million in biofuel. Mobile Money: 4 Services Tackling Wealth Inequality in Africa.