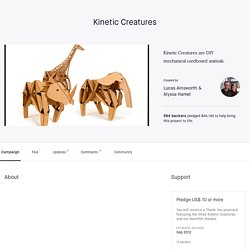 The Creatures, Elly the elephant, Rory the rhino, and Geno the giraffe, are each made up of cardboard pieces that you assemble using tabs-and-slots. By turning the wire handle the creatures come alive with a simple mechanical motion. encourage people to build with their hands, minds and imagination. Paper Toys - Paper Cut-Outs - Free at PaperToys.com. Cardboard Waste Tower - Viewing All Comments. I made this when I moved into my dorm room at college and got fed up having such a messy trash and recycling situation. 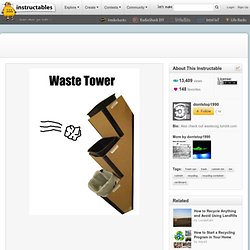 I designed something to elegantly separate trash from paper recycling and plastic/metal recycling. Having just moved to New York City, I was inspired by the efficiency of building upward. So I decided to make the Waste Tower... I designed the Waste Tower to hold standard size office waste bins. This is one of those projects that are pretty self explanatory. This Cardboard Garbage Tower Organizes Your Rubbish Bins. Origami Chicken for Easter -It’s an chick and it’s an origami box! Da clic aquí y lee en ESPAÑOL I just received and watched an adorable video of my two-year-old nephew, Emilio, playing the drum and singing Los Pollitos (The little chicks). 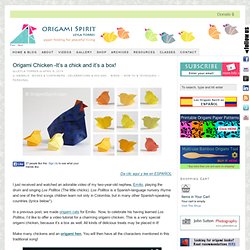 Los Pollitos is a Spanish-language nursery rhyme and one of the first songs children learn not only in Colombia, but in many other Spanish-speaking countries (lyrics below*). In a previous post, we made origami cats for Emilio. Now, to celebrate his having learned Los Pollitos, I’d like to offer a video tutorial for a charming origami chicken. This is a very special origami chicken, because it’s a box as well. Make many chickens and an origami hen, You will then have all the characters mentioned in this traditional song! This origami chicken was created by the late Simon Andersen, an origami artist from Denmark. Simon’s chick seems to have hatched from the eggs laid by my origami hen. Much of Simon’s work may be viewed at Hans Dybkjær’s website, Papirfoldning. 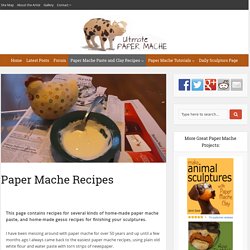 I have been messing around with paper mache for over 50 years and up until a few months ago I always came back to the easiest paper mache recipes, using plain old white flour and water paste with torn strips of newspaper. Now, however, I have abandoned the traditional layered paper process and use my new paper mache clay recipeÂ and/or the even newer silky-smooth air-dry clay recipe for most my sculptures.

However, for younger artists or for those who really don’t want to make the trip to the hardware store, these following recipes work just fine, and most of the tutorials on this site would work using these traditional paper mache recipes. Cardboard. Kid-Eco Cardboard Toys & Playhouses > Assembly Instructions. Build a Cardboard and Paper Castle. Make a Paper and Cardboard Medieval Castle This is a complete project that shows you how to make a medieval castle out of paper and cardboard. 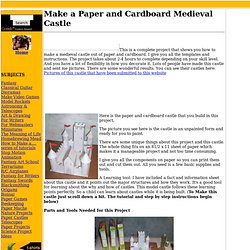 I give you all the templates and instructions. The project takes about 2-4 hours to complete depending on your skill level. Assembly Instructions - Cardboard Toys. Aa_cardboard_lyre.pdf. Cardboard Furniture. Cardboard furniture. Origami Dinosaurs, a list of online, origami-dinosaur diagrams & dinosaur books. Origami Dinosaurs: children love dinosaurs and they love paper folding too. 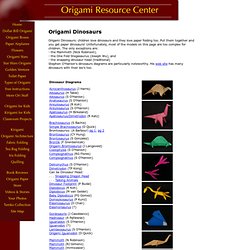 Put them together and you get paper dinosaurs! Unfortunately, most of the models on this page are too complex for children. The only exceptions are: - the Mammoth (Nick Robinson). - the One Fold Stegasaurus (Joseph Wu), and - the snapping dinosaur head (traditional) Stephen O’Hanlon's dinosaurs diagrams are particularly noteworthy. His web site has many dinosaurs with their bio’s too. Dinosaur Books Paper Dinosaurs by Alan Folder (book review here) Prehistoric Origami by John Montroll Origami Skeleton of Tyrannosaurus Rex by Issei Yoshino Origami Dinosaurs by Michael G. These paper dinosaurs are freely available on the internet. Fun Kids Crafts, Science Projects, and More. 9. 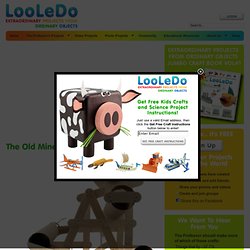 Final touches! The final touches are all that’s left! We decided to make some signs out of cardboard and some tools from two toothpicks and some paper. Now we have an awesome Mine Shaft Marble Slide! You can do any theme here, maybe your slide will be a roller coaster, a jungle, or a cool water park. Don’t forget to post pictures of your version in the Your Photo Projects section of LooLeDo.com! Paper Model of a Globe. Globe (.PDF) Print the PDF file to make the paper model. 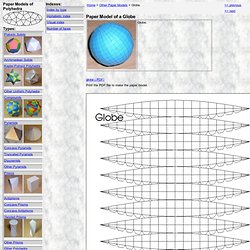 On the globe are drawn meridians and circles of latitudes (parallels) every 10°. Modular Cardboard Bookshelves v.1. The Paper Model WebRing. CartonLab. Cardboard Engineering. Fun Kids Crafts, Science Projects, and More. Cardboard Modeling - James Dyson Foundation. The Art of Making and Why Cardboard Modeling is Fantastic. - SolidSmack. It use to be that nothing made us happier than duct tape, a pile of cardboard scraps and a pair of sharp scissors. 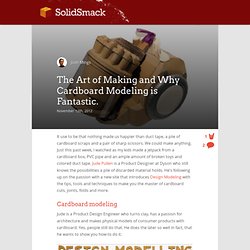 We could make anything. Just this past week, I watched as my kids made a jetpack from a cardboard box, PVC pipe and an ample amount of broken toys and colored duct tape. Jude Pullen is a Product Designer at Dyson who still knows the possibilities a pile of discarded material holds. He’s following up on the passion with a new site that introduces Design Modeling with the tips, tools and techniques to make you the master of cardboard cuts, joints, folds and more. Cardboard modeling Jude is a Product Design Engineer who turns clay, has a passion for architecture and makes physical models of consumer products with cardboard. For Jude, cardboard modelling has been a means to and end, working with people from around the world, to create a physical model of an idea.