Night of the Twisters

Learn about Natural Disasters. Weather - BrainPOP. Tornadoes - BrainPOP. The Real Night of the Twisters. Author discovers children can relate to fictional account of G.I. tornadoes By Molly Klocksin Independent Staff Writer When children's author Ivy Ruckman visits a school, the students nearly always insist that she read ''Night of the Twisters.'' ''They won't let me get by without talking about it,'' Ruckman said during a telephone interview from her home in Salt Lake City. ''It's always the one book they want to hear about. 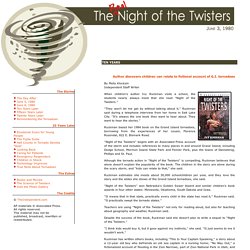 They want to hear the stories.'' Ruckman based her 1984 book on the Grand Island tornadoes, borrowing from the experiences of her cousin, Florence Rozendal, 822 E. ''Night of the Twisters'' begins with an Associated Press account of the storm and includes references to many places in and around Grand Island, including Dodge School, Mormon Island State Park and Fonner Park, plus the towns of Dannebrog, Phillips and St.

Athough the tornado action in ''Night of the Twisters'' is compelling, Ruckman believes that alone doesn't explain the popularity of the book. The Tornado Project. NWS - Watch, Warning, Advisory Display. Tornado Simulator. The first item we will have in our workshop is a tornado simulator. 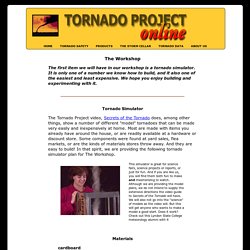 It is only one of a number we know how to build, and it also one of the easiest and least expensive. We hope you enjoy building and experimenting with it. Tornado Simulator The Tornado Project video, Secrets of the Tornado does, among other things, show a number of different "model" tornadoes that can be made very easily and inexpensively at home. Most are made with items you already have around the house, or are readily available at a hardware or discount store. This simulator is great for science fairs, science projects or reports, or just for fun. Materials cardboard If you can find a 24" high box that is 12" on each side you can cut the bottom and top off and save time. Tools Working with cutting tools and hot plates can be dangerous. Directions Use the meter or yard stick to measure and mark each item before you cut. 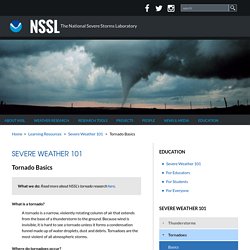 The presence of inflow bands suggests that the storm is gathering low-level air from several miles away. If the inflow bands have a spiraling nature to them, it suggests the presence of rotation. The beaver's tail is a smooth, flat cloud band extending from the eastern edge of the rain-free base to the east or northeast. It usually skirts around the southern edge of the precipitation area. It also suggests the presence of rotation. A wall cloud is an isolated cloud lowering attached to the rain-free base of the thunderstorm. A wall cloud that may produce a tornado usually exists for 10–20 minutes before a tornado appears. As the storm intensifies, the updraft draws in low-level air from several miles around. June 3,1980 Grand Island Tornadoes. The Grand Island Tornadoes It may still seem like yesterday to some folks, but Friday, June 3, 2016 marked the 36th Anniversary of one of the most devastating and unique tornado events to ever strike south central Nebraska. 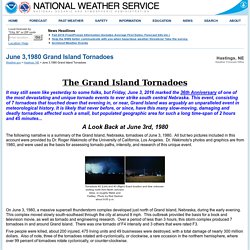 This event, consisting of 7 tornadoes that touched down that evening in, or near, Grand Island was arguably an unparalleled event in meteorological history. It is likely that never before, or since, have this many slow-moving, damaging and deadly tornadoes affected such a small, but populated geographic area for such a long time-span of 2 hours and 45 minutes...

A Look Back at June 3rd, 1980 The following narrative is a summary of the Grand Island, Nebraska, tornadoes of June 3, 1980. On June 3, 1980, a massive supercell thunderstorm complex developed just north of Grand Island, Nebraska, during the early evening. Five people were killed, about 200 injured, 475 living units and 49 businesses were destroyed, with a total damage of nearly 300 million dollars.