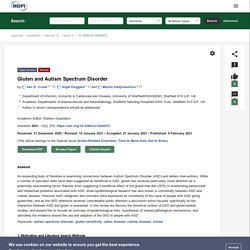 Motivation and Literature Search Methods Autism Spectrum Disorder (ASD) is a neurodevelopmental disorder characterised primarily by deficits in social communication and restricted/repetitive patterns of behaviour (DSM-5) [1]. As the name implies its phenotype exists on a spectrum, and overall it is estimated to affect as many as one in 69 children [2]. Interest in the use of specialist diets in ASD is increasing, as a way to alleviate its behavioural and intellectual outcomes. Though many dietary interventions have been suggested, the gluten-free diet (GFD) is among the most notable. Searches were made on Pubmed on the 12th of November 2020. Autism coeliacAutism celiacAutism glutenAutism wheatAutistic coeliacAutistic celiacAutistic glutenAutistic wheat These terms were designed to capture a range of relevant terminology, for example “autism spectrum disorder” or “gluten free diet” would each be picked up by these. 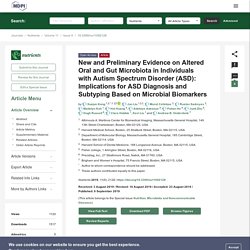 The etiology of ASD likely involves interaction between genetic and environmental factors. Recent studies suggest that oral and gut microbiome play important roles in the pathogenesis of inflammation, immune dysfunction, and disruption of the gut–brain axis, which may contribute to ASD pathophysiology. The majority of previous studies used unrelated neurotypical individuals as controls, and they focused on the gut microbiome, with little attention paid to the oral flora. ►▼ Show Figures Figure 1 This is an open access article distributed under the Creative Commons Attribution License which permits unrestricted use, distribution, and reproduction in any medium, provided the original work is properly cited ►▼ Show Figures.

Nutritional Supplements During Gestation and Autism Spectrum Disorder: What Do We Really Know and How Far Have We Gone?: Journal of the American College of Nutrition: Vol 0, No 0. Nutritional interventions are gaining remarkable attention as complementary management options for autism. 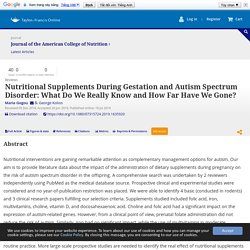 Our aim is to provide literature data about the impact of the administration of dietary supplements during pregnancy on the risk of autism spectrum disorder in the offspring. A comprehensive search was undertaken by 2 reviewers independently using PubMed as the medical database source. Prospective clinical and experimental studies were considered and no year-of-publication restriction was placed. We were able to identify 4 basic (conducted in rodents) and 3 clinical research papers fulfilling our selection criteria.

Autism Spectrum Disorders and the Gut Microbiota. Dietary Considerations in Autism Spectrum Disorders: The Potential Role of Protein Digestion and Microbial Putrefaction in the Gut-Brain Axis. Introduction Autism spectrum disorder (ASD) is characterized by varying degrees of neural dysfunction that lead to behavioral abnormalities including: stereotyped/repetitive behaviors, impairments in social interaction, lack of verbal and nonverbal language skills, insistence on routines and intense or idiosyncratic interests (1–3). 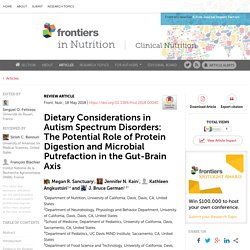 ASD includes a heterogeneous range of disorders with various levels of intellectual functioning, verbal abilities, and multiple genetic etiologies. The estimated prevalence of autism in 8-year-olds in 2012 was 1:68 children with a much higher occurrence in boys (23.6 per 1,000) than in girls (5.3 per 1,000) (4). Over the past decade, the incidence rate has been steadily increasing (5). While increased awareness, concern and diagnostic criteria of ASD has expanded, some postulate that this increased prevalence cannot be entirely attributed to increased recognition and more expansive diagnostic criteria (5). 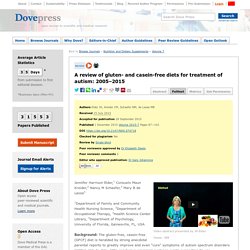 Yet, to date, little conclusive empirical evidence exists supporting its use. Objective: The purpose of this paper is to provide an overview of the state of the recent evidence regarding the use of GFCF diet for treatment of individuals with ASD. Methods: Five database providers (PubMed, Web of Knowledge, EBSCO, ProQuest, and WorldCat) were used to search 19 databases, yielding a total of 491 articles that were published through February 2015. Introduction Methods Results Reviews Group experimental studies Case reports Discussion. Evidence-Based Practices for Children, Youth, and Young Adults with Autism Spectrum Disorder. Practice Parameter for the Assessment and Treatment of Children and Adolescents With Autism Spectrum Disorder. 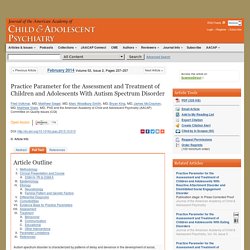 Pharmacotherapy may be offered to children with ASD when there is a specific target symptom or comorbid condition [CG]. Recommendation 6. The clinician should maintain an active role in long-term treatment planning and family support and support of the individual [CG]. Recommendation 7. Clinicians should specifically inquire about the use of alternative/complementary treatments and be prepared to discuss their risk and potential benefits [CS].