How to Cook Like Heston - Articles - Tiramisu Recipe. Heston: "Tiramisù is a classic Italian desert but there is nothing classic about my version which is served in clean flower pots and topped with edible soil and chocolate herbs. 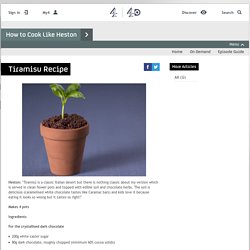 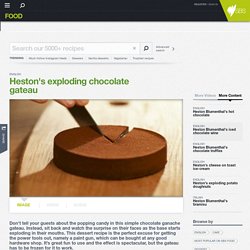 Place the shortbread biscuits on a baking tray and bake in the oven for 10 minutes or until golden brown. Place the biscuits in a food processor and add the melted butter and sugar. Blitz until the mixture resembles fine sand in texture. Gently stir in the popping candy. Place the mixture inside a 15 cm cake tin placed on a tray lined with baking paper. How to Cook Like Heston - Articles - Exploding Chocolate Gateau Recipe.

Heston: "Don't tell your guests about the popping candy in this simple chocolate ganache gateau. 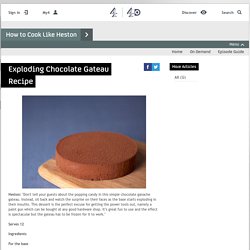 Instead, sit back and watch the surprise on their faces as the base starts exploding in their mouths. This dessert is the perfect excuse for getting the power tools out, namely a paint gun which can be bought at any good hardware shop. Mobile. How to Cook Like Heston - Articles - Lemon Tart Recipe. Heston: "For this tart to achieve greatness, the filling has to be exactly the right texture – not too soft but not too firm either. 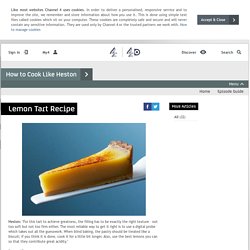 The most reliable way to get it right is to use a digital probe which takes out all the guesswork. When blind baking, the pastry should be treated like a biscuit; if you think it is done, cook it for a little bit longer. Also, use the best lemons you can so that they contribute great acidity. " Serves 12 Ingredients For the pastry 300g plain flour150g unsalted butter½ tsp salt120g icing sugar3 large egg yolksSeeds from ½ vanilla podFinely grated zest of ½ lemon1 egg for the egg wash For the filling Finely grated zest and juice of 5 lemons300ml double cream390g white caster sugar9 large eggs1 large egg yolk Method. 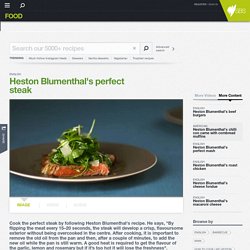 Heat until the oil is smoking hot. Season the steaks with a little salt and place them away from you in the hot pan for 15–20 seconds. Then turn the steaks over and fry for a further 15–20 seconds. Repeat this, turning the steaks, for 2–3 minutes. Remove from the pan and allow to rest on a wire rack, set over a plate to catch the juices, for 5 minutes. Remove the pan from the heat and discard most of the oil (but don’t clean the pan). Strain this dressing through a sieve and add any juices from the steak.

Slice the steaks thinly (5 mm wide) with a sharp knife. Heston Blumenthal's beef burgers recipe. Place 600 g of the cubed sirloin in a bowl and sprinkle with the salt. 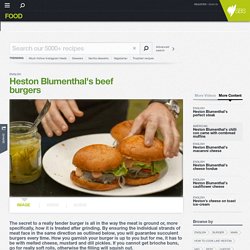 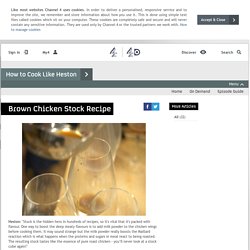 One way to boost the deep meaty flavours is to add milk powder to the chicken wings before cooking them. It may sound strange but the milk powder really boosts the Maillard reaction which is what happens when the proteins and sugars in meat react to being roasted. The resulting stock tastes like the essence of pure roast chicken - you’ll never look at a stock cube again! " Ingredients 2kg chicken wings2 tbsp skimmed milk powderGrapeseed oil150g onion, peeled and finely sliced75g carrot, peeled and finely sliced100g button mushrooms, quartered2 cloves garlic, bashed and peeled1 reserved carcass from roast chicken Method 1. 2. 3. 4. 5. 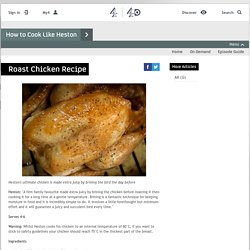 Brining is a fantastic technique for keeping moisture in food and it is incredibly simple to do. It involves a little forethought but minimum effort and it will guarantee a juicy and succulent bird every time. " Serves 4–6 Warning: Whilst Heston cooks his chicken to an internal temperature of 60°C, if you want to stick to safety guidelines your chicken should reach 75°C in the thickest part of the breast. Ingredients 6% brine (300g salt dissolved in 5 litres of water)1.5-2kg chicken1 lemon1 bunch of thyme125g unsalted butter, at room temperature, plus extra for rubbing into the skin30ml dry white wine For the gravy (optional) 20ml dry white wine250ml chicken stock1 tsp Dijon mustard1 sprig of tarragon1 sprig of parsley Method 1. 2. 3. 4. 5. 6. 7. 8. 9. 10.