The UK media, euroscepticism and the UK referendum on EU membership – UK in a changing Europe. The British mass media market is dominated by Eurosceptic press titles. 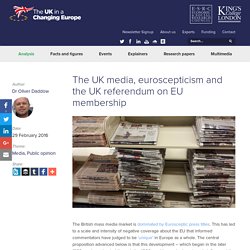 This has led to a scale and intensity of negative coverage about the EU that informed commentators have judged to be ‘unique’ in Europe as a whole. The central proposition advanced below is that this development – which began in the later 1980s and accelerated through the 1990s and beyond – has strongly influenced the ways in which UK politicians think about what is achievable in their European policies, as well as what is desirable in the first place. A ‘climate of fear’ from press backlashes has meant that UK governments have been increasingly unwilling to devise, implement and publicise pro-European initiatives.

BBC, ITV, Sky News: Media Bias in relation to the EU Referendum. The forthcoming debate and referendum in regards to Britain's membership of the European Union is likely to be the defining political decision of this generation. 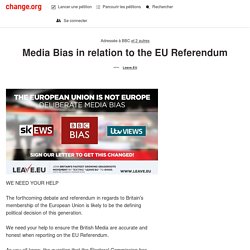 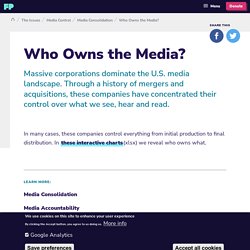 In return, they are supposed to provide programming that fulfills community needs. Instead, lobbyists have successfully fought to make it easier for broadcast companies to gobble up even more free airspace while doing less to serve the public. Take Action to end the big broadcast swindle. 2011 Revenue: $6.2 billion Company Overview: These private equity firms own Clear Channel, the largest radio station owner in the country. Radio: 866 radio stations and Premiere Radio Networks (a national radio network that produces, distributes or represents approximately 90 syndicated radio programs, serves nearly 5,800 radio station affiliates and has over 213 million weekly listeners.

Other: Katz Media (radio advertising broker); American Outdoor Advertising 2011 Revenue: $14.2 billion Radio: CBS Radio and 130 radio stations. The impact of the mass media on the quality of democracy within a state remains a much overlooked area of study. Media organisations are generally assumed to play an important role in democracies, but how effective are they in performing this function within specific states? 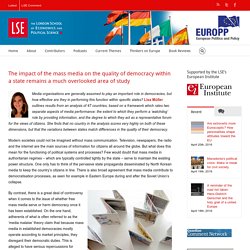 Lisa Müller outlines results from an analysis of 47 countries, based on a framework which rates two separate aspects of media performance: the extent to which they perform a ‘watchdog’ role by providing information, and the degree to which they act as a representative forum for the views of citizens. Beware the ‘false consciousness’ theory: newspapers won’t decide the EU referendum. Campaigners should not overestimate the influence of traditional newspapers, says Charlie Beckett: their sales are in decline and they face competition from more politically neutral and humorous news sites like Buzzfeed and Vice. 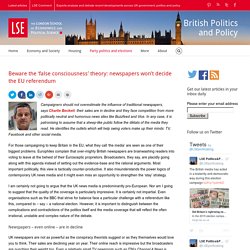 In any case, it is patronising to assume that a sheep-like public follow the diktats of the media they read. He identifies the outlets which will help swing voters make up their minds: TV, Facebook and other social media. For those campaigning to keep Britain in the EU, what they call ‘the media’ are seen as one of their biggest problems. Europhiles complain that over-mighty British newspapers are brainwashing readers into voting to leave at the behest of their Eurosceptic proprietors. Broadcasters, they say, are placidly going along with this agenda instead of setting out the evidence-base and the rational arguments. I am certainly not going to argue that the UK news media is predominantly pro-European. 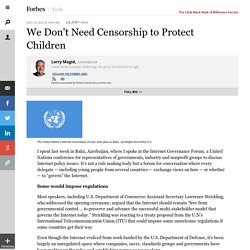 It’s not a rule making body but a forum for conversation where every delegate — including young people from several countries — exchange views on how — or whether — to “govern” the Internet. Some would impose regulations Most speakers, including U.S. Department of Commerce Assistant Secretary Lawrence Strickling, who addressed the opening ceremony, argued that the Internet should remain “free from governmental control … to preserve and advance the successful multi-stakeholder model that governs the Internet today.”

Even though the Internet evolved from work funded by the U.S. Russian law not the answer. 10 Orwellian Technologies That Exist Today. Technology Although George Orwell was a little premature in predicting a total surveillance state in 1984, based on some of today’s technology, he wasn’t too far off the mark. 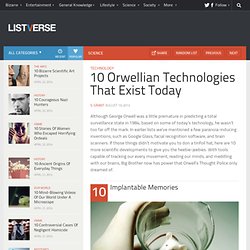 In earlier lists we’ve mentioned a few paranoia-inducing inventions, such as Google Glass, facial recognition software, and brain scanners. If those things didn’t motivate you to don a tinfoil hat, here are 10 more scientific developments to give you the heebie-jeebies. With tools capable of tracking our every movement, reading our minds, and meddling with our brains, Big Brother now has power that Orwell’s Thought Police only dreamed of.

Extract Quote from Huffpost Media on Censorship. 13 quotes from George Orwell's 1984 that resonate more than ever. One of the most influential dystopian novels ever written, 1984 has had a profound effect on the world. 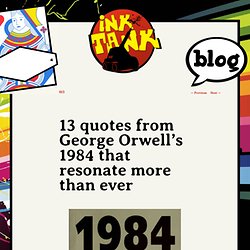 Since its publication in 1949 many of its concepts have entered modern day parlance. Big Brother, doublethink, thoughtcrime, Newspeak and Room 101 are all part of Orwell’s world. What’s more, as a result of the book, Orwellian is now a term to describes official deception, secret surveillance, and manipulation of the past by a totalitarian or authoritarian state. Orwell hoped that by writing 1984 he’d help stop such a state ever coming to pass. Read these thirteen quotes to decide for yourself. 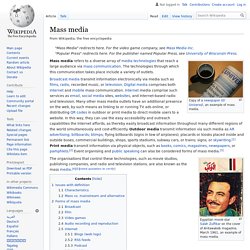 Digital media comprises both Internet and mobile mass communication. Internet media comprise such services as email, social media sites, websites, and Internet-based radio and television. Many other mass media outlets have an additional presence on the web, by such means as linking to or running TV ads online, or distributing QR Codes in outdoor or print media to direct mobile users to a website.