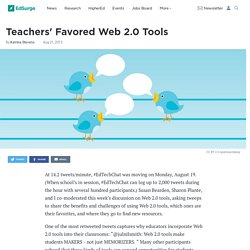 (When school’s in session, #EdTechChat can log up to 2,000 tweets during the hour with several hundred participants.) Susan Bearden, Sharon Plante, and I co-moderated this week’s discussion on Web 2.0 tools, asking tweeps to share the benefits and challenges of using Web 2.0 tools, which ones are their favorites, and where they go to find new resources. One of the most retweeted tweets captures why educators incorporate Web 2.0 tools into their classrooms: “@julnilsmith: Web 2.0 tools make students MAKERS - not just MEMORIZERS. “ Many other participants echoed that these kinds of tools can expand opportunities for students-- particularly by providing them with an authentic audience and allowing them to collaborate with peers worldwide. When choosing which tools to try, @MrStaubSTEM summed it up best: “The best edtech is the one you can use effectively that meets the needs in your classroom. . ” · Animoto · Aurasma · Diigo. Ruben R. Puentedura's Weblog. 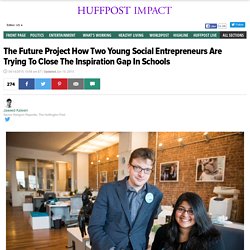 When Andrew Mangino talks about the startup he co-founded, one that’s been hailed by boldface names ranging from spiritual guru Deepak Chopra to Special Olympics chairman Tim Shriver, he doesn’t describe any complex technology or app. He speaks in the same excited cadences of any Silicon Valley innovator, but his idea is about as low-tech as it gets. When he’s asked about how it all got started, he inevitably mentions three things: an internship, the ability to dream and a Bangladeshi-American high school student. It was in the fall of 2009, just a few months after he graduated with a degree in politics from Yale, that Mangino signed up to be a mentor through his internship as a speechwriter in the office of Vice President Joe Biden. “I said to him, ‘What’s your passion?

It’s not that the typical metrics aren’t important, Mangino says. With $2M From Zynga Co-founder & More, Sokikom Wants To Use Social, MMO Gaming To Help Kids Learn Math. Sokikom, a new startup that wants to help K-12 teachers motivate students to learn using games, is announcing today that it has raised $2 million in seed funding, half of which comes in the form of a grant from the Institute of Education Sciences (a research branch within the U.S. 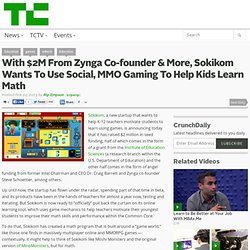 Department of Education) and the other half comes in the form of angel funding from former Intel Chairman and CEO Dr. Craig Barrett and Zynga co-founder Steve Schoettler, among others. Up until now, the startup has flown under the radar, spending part of that time in beta, and its products have been in the hands of teachers for almost a year now, testing and iterating. But Sokikom is now ready to “officially” pull back the curtain on its online learning tool, which uses game mechanics to help teachers motivate their youngest students to improve their math skills and performance within the Common Core.

As to why Sokikom decided to focus on math? Houston, we have a Math problem. Too Many Kids Quit Science Because They Don't Think They're Smart. But praising their intelligence can make them feel even more insecure. 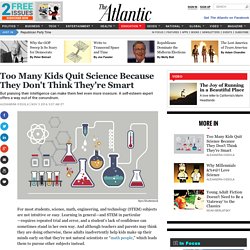 A self-esteem expert offers a way out of the conundrum. Nyro/Shutterstock For most students, science, math, engineering, and technology (STEM) subjects are not intuitive or easy. Learning in general—and STEM in particular—requires repeated trial and error, and a student’s lack of confidence can sometimes stand in her own way. And although teachers and parents may think they are doing otherwise, these adults inadvertently help kids make up their minds early on that they're not natural scientists or “math people,” which leads them to pursue other subjects instead.

So what's the best way to help kids feel confident enough to stay the STEM course? Alexandra Ossola: What sparked your interest in this field? Ossola: What is a mistake that parents and teachers often make when it comes to praising kids? Dweck: They often praise the ability, the talent, or the intelligence too much. Made with Code_Google. Bootstrap.