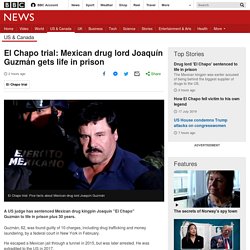 Guzmán, 62, was found guilty of 10 charges, including drug trafficking and money laundering, by a federal court in New York in February. He escaped a Mexican jail through a tunnel in 2015, but was later arrested. He was extradited to the US in 2017. He is a former head of the Sinaloa cartel, which officials say was the biggest supplier of drugs to the US.

The preachers getting rich from poor Americans. Image copyright Joseph De Sciose Televangelist Todd Coontz has a well-worn routine: he dresses in a suit, pulls out a Bible and urges viewers to pledge a very specific amount of money. 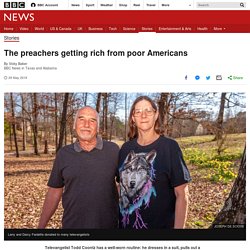 "Don't delay, don't delay," he urges, calmly but emphatically. It sounds simple, absurdly so, but Coontz knows his audience extremely well. He broadcasts on Christian cable channels, often late into the night, drawing in viewers who lack financial literacy and are desperate for change. "I understand the laws that govern insurance, stocks and bonds and all that is involved with Wall Street," he once said, looking directly into the camera. Insys Therapeutics founder John Kapoor convicted in US opioid case. Image copyright Getty Images The founder of Insys Therapeutics John Kapoor has become the first pharmaceutical boss to be convicted in a case linked to the US opioid crisis. 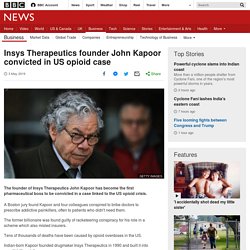 A Boston jury found Kapoor and four colleagues conspired to bribe doctors to prescribe addictive painkillers, often to patients who didn't need them. The former billionaire was found guilty of racketeering conspiracy for his role in a scheme which also misled insurers. Tens of thousands of deaths have been caused by opioid overdoses in the US. Anna Delvey: The trial of New York's fake heiress. Image copyright BFA Just how far can you get in the New York City socialite scene without a real fortune of your own? 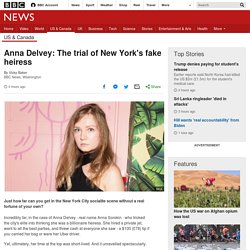 Incredibly far, in the case of Anna Delvey - real name Anna Sorokin - who tricked the city's elite into thinking she was a billionaire heiress. She hired a private jet, went to all the best parties, and threw cash at everyone she saw - a $100 (£78) tip if you carried her bag or were her Uber driver. Yet, ultimately, her time at the top was short-lived.

And it unravelled spectacularly. In real life, Sorokin had no multi-million-dollar trust fund. 'Air Cocaine' pilots sentenced to six years in drug smuggling trial. Image copyright AFP Two former air force pilots have been sentenced to six years in prison by a French court after 26 suitcases stashed with cocaine were found on board their plane in the Dominican Republic. 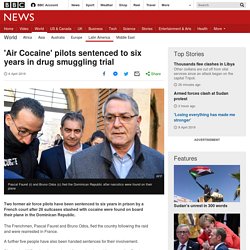 The Frenchmen, Pascal Fauret and Bruno Odos, fled the country following the raid and were rearrested in France. A further five people have also been handed sentences for their involvement. Ringleader Ali Bouchareb was given 18 years in prison. His accomplice Frank Colin was handed a 12-year sentence. Two others were acquitted after the seven-week trial. Former Barclays traders jailed over Euribor rate-rigging. Image copyright AFP Two traders have been jailed after being convicted of conspiring to rig the Euribor global interest rate. 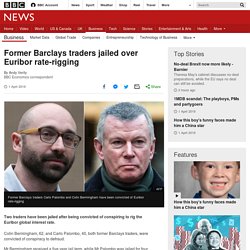 Colin Bermingham, 62, and Carlo Palombo, 40, both former Barclays traders, were convicted of conspiracy to defraud. Mr Bermingham received a five year jail term, while Mr Palombo was jailed for four years. Another trader, Sisse Bohart, has been acquitted. The sentences bring to an end the biggest trial so far for rigging interest rates - in this case the Euribor benchmark used to fix the interest rates of millions of euro-denominated loans. Lisa Osofsky, director of the Serious Fraud Office, said: "These men deliberately undermined the integrity of the financial system to line their pockets and advance the interests of their employers.

"We are committed to tracking down and bringing to justice those who defraud others and abuse the system. " The estimates would be submitted to the European Banking Federation (EBF), based on current market transactions. A second trial. Former Apple lawyer charged with insider trading. Image copyright Getty Images US prosecutors have charged a former top Apple lawyer with insider trading. 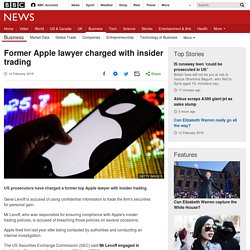 Gene Levoff is accused of using confidential information to trade the firm's securities for personal gain. Mr Levoff, who was responsible for ensuring compliance with Apple's insider trading policies, is accused of breaching those policies on several occasions. Apple fired him last year after being contacted by authorities and conducting an internal investigation. The US Securities Exchange Commission (SEC) said Mr Levoff engaged in insider trading various times between 2011 and 2016. "Levoff's alleged exploitation of his access to Apple's financial information was particularly egregious given his responsibility for implementing the company's insider trading compliance policy," Antonia Chion, associate director of the SEC's division of enforcement, said in a statement.

"The SEC is committed to pursuing insiders who breach their duties to investors. "