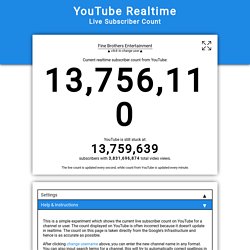 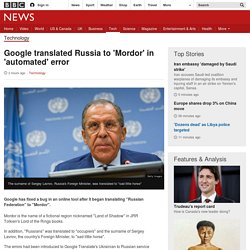 Everything depends on your perspective. Sidney harbour without the water. Half of the US population in blue spots. A bird or a girl? Perspectives. Dandelion preserved in resin. Do You End Texts With Periods? Stop It, You Monster. Want to win friends and influence people? 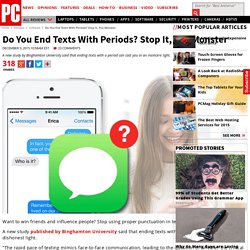 Stop using proper punctuation in text messages. A new study published by Binghamton University said that ending texts with a period can cast you in a dishonest light. "The rapid pace of texting mimics face-to-face communication, leading to the question of whether the critical non-verbal aspects of conversation, such as tone, are expressed" via texts, the study said. Lemon vs Lime. Edit How Lemons and Limes Are Used Lemons and limes are both very acidic but have slightly different flavors and scents. 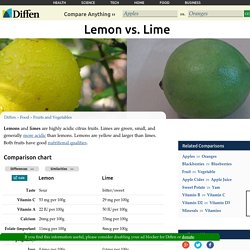 A lemon has a bitter, acidic taste, while a lime has a sour, acidic taste. Both citrus fruits are frequently used in cooking and cocktails, as well a variety of household products. edit In Cooking Lemon juice is added to salads and pasta dishes and squeezed over fish fillets and meats; it is even used in many jams and preserves. Desserts also make frequent use of the lemon's flavor, with lemon juice, pulp, and zest often found in ice creams and gelatos, pies and their meringues, cookies, cheesecakes, pastries, and cakes. Spanish in El Salvador: accent, pronunciation, etc. Optical Illusion - Scroll Slow. Have Fun. Moscow Court Bans Church of Scientology.

Russia Get short URL MOSCOW (Sputnik) – During the inspection the Russian Ministry of Justice found out that the word 'scientology' had been registered as a trade mark owned by the US Religious Technology Center. 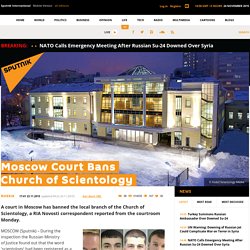 The court backed the Russian Justice Ministry's claim that the organization's activity did not comply with the federal law on freedom of religion. "The representatives of the Church of Scientology have created many legal conflicts by themselves by restricting the religious freedom through the use of trade marks," the Ministry of Justice said. The Church was founded by American science fiction author L. Standard Time: A clock rebuilt every minute. Industrial Egg Separator. This light keeps the leaves warm enough that they haven't fallen. Shootibg Star. Frozen Buble. 1750 BC Problems. Saturn-shaped water droplet. Subway Tunnel turned into Pool. LunarGrand Mens Shoes - Black shoes w/nike sole - Cole Haan. 6 Differences Between Llamas and Alpacas. Eat Dirt. Animals eat dirt, and people eat dirt too. 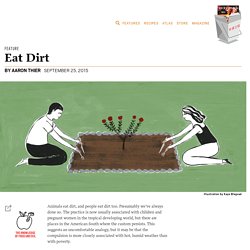 Presumably we’ve always done so. The practice is now usually associated with children and pregnant women in the tropical developing world, but there are places in the American South where the custom persists. This suggests an uncomfortable analogy, but it may be that the compulsion is more closely associated with hot, humid weather than with poverty.

Bird getting its prey - like a fucking arrow. Famous Selfie taken by Monkey. London Underground 'too fast' ? Image copyright Thinkstock A mathematical study of transport in London and New York suggests the British capital should be wary of its trains travelling too quickly. 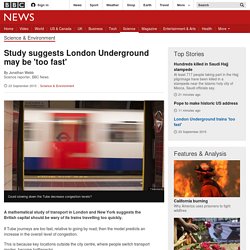 If Tube journeys are too fast, relative to going by road, then the model predicts an increase in the overall level of congestion. This is because key locations outside the city centre, where people switch transport modes, become bottlenecks. More people die from selfies than shark attacks. The Great White shark used to be one of the most effective killing machines on the planet — or so we thought. 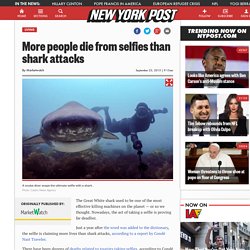 Nowadays, the act of taking a selfie is proving far deadlier. Just a year after the word was added to the dictionary, the selfie is claiming more lives than shark attacks, according to a report by Condé Nast Traveler. There have been dozens of deaths related to tourists taking selfies, according to Condé Nast research, compared with just eight confirmed shark-related deaths this year through August. And that’s just the widely reported cases involving tourism — there are likely far more non-tourist-specific cases, such as people taking selfies and Snapchat videos while behind the wheel of a car. 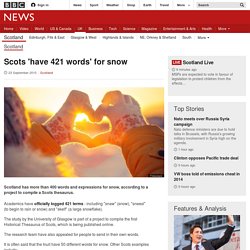 The difference among Generations. The Internet is a Series of tubes. [edit] [edit] Most writers and commentators derisively cited several of Stevens's misunderstandings of Internet technology, arguing that the speech showed that he had formed a strong opinion on a topic which he understood poorly (e.g., referring to an e-mail message as "an Internet" and blaming bandwidth issues for an e-mail problem much more likely to be caused by mail server or routing issues). 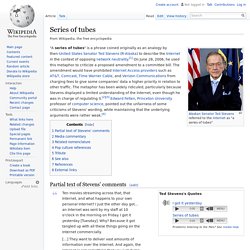 The story sparked mainstream media attention, including a mention in the New York Times.[10] The technology podcast This Week in Tech discussed the incident.[11] According to The Wall Street Journal, as summarized by MediaPost commentator Ross Fadner:[12] Related nomenclature[edit] Pop culture references[edit] The Daily Show with Jon Stewart has made multiple references to "Techno" Ted Stevens's "series of tubes" description;[15][16][17][18] as a result, Stevens has become well known as the person who once headed the committee charged with regulating the Internet. Tribute[edit] See also[edit] Boat Traffic in Amsterdam. The Backwards Brain Bicycle - Smarter Every Day 133. Snapping Turtle vs. Pineapple. Dragon spotted in Portugal. Contact Juggling - His Skills are Totally Hypnotizing. Grand Canyon from the Stratosphere! A Space Balloon Story. Mythbusters: Are elephants afraid of mice? HQ! Showing up at my own funeral by Kingvim.