Nano-balls filled with poison wipe out metastatic cancer in mice. For most cancer patients, it’s not the original tumor that poses the greatest risk. 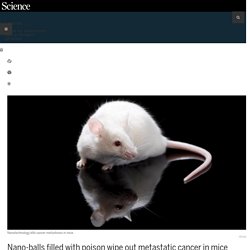 It’s the metastases that invade the lung, liver, and other tissues. Now, researchers have come up with an approach that tricks these spinoff tumors into swallowing poison. So far the strategy has only been tested in mice, where it proved highly effective. But the results are promising enough that the researchers are planning to launch clinical trials in cancer patients within a year. The new work is “very innovative stuff,” says Steven Libutti, a geneticist and cancer surgeon at the Albert Einstein College of Medicine in New York City, who was not involved in the study. At the heart of the new therapy is a chemotherapeutic agent called doxorubicin (dox). Hoping to provide such cell specificity, researchers led by Mauro Ferrari, a nanomedicine expert, as well as president and CEO of the Houston Methodist Research Institute in Texas, have spent years developing porous silicon particles as drug carriers. 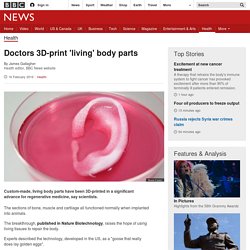 The sections of bone, muscle and cartilage all functioned normally when implanted into animals. The breakthrough, published in Nature Biotechnology, raises the hope of using living tissues to repair the body. Experts described the technology, developed in the US, as a "goose that really does lay golden eggs". The idea of placing individual human cells in a precise pattern to replace a damaged jaw, missing ear or scarred heart muscle holds much promise. Lean Dad Fat Dad Provide Epigenetically Different Sperm. It may be just a matter of time before someone writes a book called “Lean Dad Fat Dad” in hopes of emulating the success of “Rich Dad Poor Dad,” a bestseller that summarized the financial life lessons that can be passed from generation to generation. 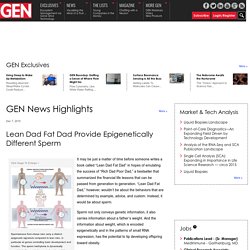 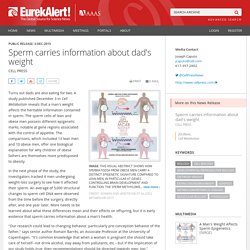 A study published December 3 in Cell Metabolism reveals that a man's weight affects the heritable information contained in sperm. The sperm cells of lean and obese men possess different epigenetic marks, notable at gene regions associated with the control of appetite. 'Designer cells' reverse one-year-old's cancer. The first person in the world to receive a pioneering genetic therapy has had her cancer reversed, say Great Ormond Street doctors. 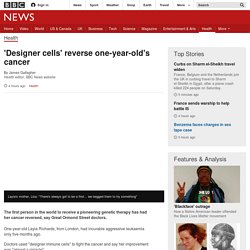 One-year-old Layla Richards, from London, had incurable aggressive leukaemia only five months ago. Doctors used "designer immune cells" to fight the cancer and say her improvement was "almost a miracle". It is too soon to know if she has been cured, but her progress already marks a huge moment for the field. Layla was three months old when she was diagnosed with the condition. Scientists examine why men even exist. Sex is a messy, inefficient method of reproducing, but most multicellular organisms have evolved to rely on a partner regardless. 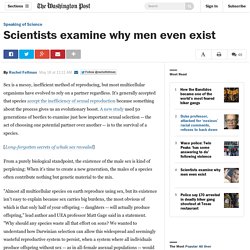 It's generally accepted that species accept the inefficiency of sexual reproduction because something about the process gives us an evolutionary boost. A new study used 50 generations of beetles to examine just how important sexual selection -- the act of choosing one potential partner over another -- is to the survival of a species. [Long-forgotten secrets of whale sex revealed] Germ Line Engineering with CRISPR Leads to Designer Human Embryos. Editor’s note: Since this article was first published online, there have been significant policy developments as well as a first report of engineered human embryos, both initially described in the feature below. 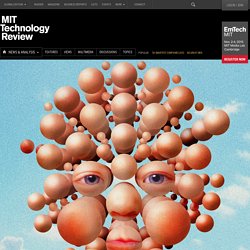 If anyone had devised a way to create a genetically engineered baby, I figured George Church would know about it. At his labyrinthine laboratory on the Harvard Medical School campus, you can find researchers giving E. UCI, fellow chemists find a way to unboil eggs. Irvine, Calif., Jan. 23, 2015 – UC Irvine and Australian chemists have figured out how to unboil egg whites – an innovation that could dramatically reduce costs for cancer treatments, food production and other segments of the $160 billion global biotechnology industry, according to findings published today in the journal ChemBioChem. 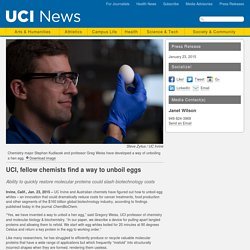 “Yes, we have invented a way to unboil a hen egg,” said Gregory Weiss, UCI professor of chemistry and molecular biology & biochemistry. “In our paper, we describe a device for pulling apart tangled proteins and allowing them to refold. Rules for babies 'from three people' 17 December 2014Last updated at 10:03 ET By James Gallagher Health editor, BBC News website The rules for creating babies from three people - which state only two would be classed as parents - have been announced by the UK government. 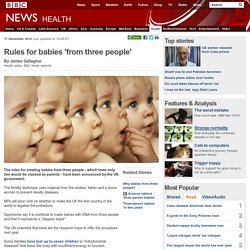 The fertility technique uses material from the mother, father and a donor woman to prevent deadly diseases. Microscope work wins Nobel Prize - Abbe's diffraction limit. 8 October 2014Last updated at 05:57 ET The technique has extended the resolution of light microscopes The 2014 Nobel Prize in Chemistry has been awarded to a trio of researchers for improving the resolution of microscopes. 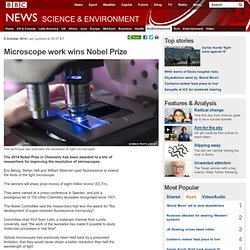 Eric Betzig, Stefan Hell and William Moerner used fluorescence to extend the limits of the light microscope. The winners will share prize money of eight million kronor (£0.7m). Cure for Type 1 diabetes imminent after Harvard stem-cell breakthrough. Height differences 'could be caused by DNA changes' 5 October 2014Last updated at 13:57 ET Thousands of genes could be involved in height, according to the study Subtle changes in our genetic make-up could help to explain why some people are taller than others, the largest ever study of height has suggested. About 400 genome regions have been identified that may be responsible for the extra inches, according to research involving more than 250,000 people.

Scientists say this could pave the way for a simple test to reassure parents with fears about their child's growth. It may also shed more light on cancer, where cell growth is out of control. Continue reading the main story. Genes May Predispose Some People to Focus on the Negative. News New research finds that a previously known gene variant may predispose individuals to perceive emotional events — especially negative ones — more vividly than others. The new findings are published in Psychological Science, a journal of the Association for Psychological Science. “This is the first study to find that this genetic variation can significantly affect how people see and experience the world,” says psychological scientist Rebecca Todd of the University of British Columbia. Hepatitis C: New drug treatment 'is a breakthrough' 12 April 2014Last updated at 01:01 ET After 12 weeks, 191 of 208 patients no longer had hepatitis C after being given an oral treatment A new treatment for hepatitis C "cured" 90% of patients with the infection in 12 weeks, scientists said.

The study is a "major breakthrough" and marks a "turning point" in hepatitis C treatment, said experts. More than 200,000 people are infected with hepatitis in the UK, and deaths from the infection have increased threefold since 1996. Only 3% of patients in the UK currently opt for the existing treatment, which only works half of the time. Genetic link to autism found, known as CHD8 mutation. In a collaboration involving 13 institutions around the world, researchers have broken new ground in understanding what causes autism. The results are being published in Cell magazine July 3, 2014: "Disruptive CHD8 Mutations Define a Subtype of Autism in Early Development. " "We finally got a clear cut case of an autism specific gene," said Raphael Bernier, the lead author, and UW associate professor in the Department of Psychiatry and Behavioral Sciences and the clinical director of the Autism Center at Seattle Children's.

Bernier said people with a mutation in the CHD8 gene have a very "strong likelihood" that they will have autism marked by gastrointestinal disorders, a larger head and wide set eyes. In their study of 6,176 children with autism spectrum disorder, researchers found 15 had a CHD8 mutation and all these cases had similar characteristics in appearance and issues with sleep disturbance and gastrointestinal problems. Implanted Neurons become Part of the Brain. Printer friendly version Share 04 August 2014 Université du Luxembourg Scientists at the Luxembourg Centre for Systems Biomedicine (LCSB) of the University of Luxembourg have grafted neurons reprogrammed from skin cells into the brains of mice for the first time with long-term stability.

Six months after implantation, the neurons had become fully functionally integrated into the brain. This successful, because lastingly stable, implantation of neurons raises hope for future therapies that will replace sick neurons with healthy ones in the brains of Parkinson’s disease patients, for example. The LCSB research group around Prof. In their latest tests, the research group and colleagues from the Max Planck Institute and the University Hospital Münster and the University of Bielefeld succeeded in creating stable nerve tissue in the brain from neurons that had been reprogrammed from skin cells.

Getting stem cells from urine. Scientists Identify Gene Required for Nerve Regeneration. Child born with HIV cured by US doctors. How Cells Obtain Energy. Antibiotics resistance 'as big a risk as terrorism' - medical chief. Dundee-led project to create an ultrasound pill. Flu Attack! How A Virus Invades Your Body. Evolution. Growing brains in the lab.