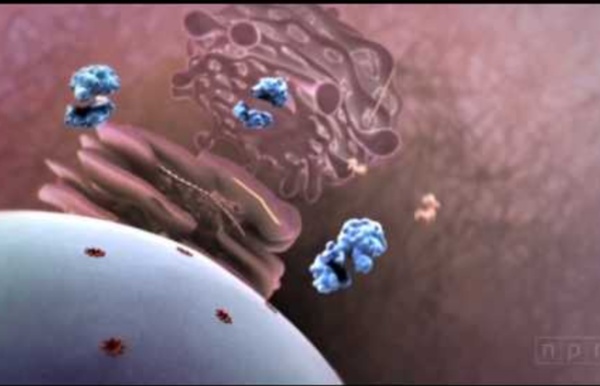 Plague Inc: Evolved on Steam Plague Inc: Evolved is a unique mix of high strategy and terrifyingly realistic simulation. Your pathogen has just infected 'Patient Zero' - now you must bring about the end of human history by evolving a deadly, global Plague whilst adapting against everything humanity can do to defend itself. Plague Inc. is so realistic that the CDC even asked the developer to come and speak about the infection models in the game! game creates a compelling world that engages the public on serious public health topics.”- Ali S. Sperm carries information about dad's weight Turns out dads are also eating for two. A study published December 3 in Cell Metabolism reveals that a man's weight affects the heritable information contained in sperm. The sperm cells of lean and obese men possess different epigenetic marks, notable at gene regions associated with the control of appetite. The comparisons, which included 13 lean men and 10 obese men, offer one biological explanation for why children of obese fathers are themselves more predisposed to obesity.

Curious study calculates the “average” female face for each country Like us on FB: In a recent study, researchers from the Scottish University blended and aligned thousands of photos of women from 40 different countries to calculate the “average” face for each nation. The resulted images are surprisingly beautiful, as aligning and blending numerous images the most part of imperfections is inevitably removed. Truth be told the study used pictures of young women, that’s why the final images portray some well-above-the-average beauties. The interesting thing about this study is that looking through the different photos you can really distinguish all the physiognomic peculiarities that make each population different from the other.

My 'Naked' Truth  Naked, I stood at the closet doors with the lights on and made myself ready. I took a deep breath and positioned the mirrors so I could see all of me. I consciously worked to remove my self-believed inner image. I opened my eyes and looked very carefully at my body. And my heart lurched at the truth: I am not a young woman anymore. I am a woman well-lived. Image is Everything: The Secrets of Body Language Share this infographic on your site! <a href=” src=” alt=”Body Language” width=”500″ border=”0″ /></a><br />Source: <a href=” Image is Everything: The Secrets of Body Language At work, at home, at play, famous, or infamous, your body language tells the world all about you. How We Communicate: 93% of what we communicate is non-verbal Gestures 55% Voice 38% Words 7%

'Quadruple helix' DNA seen in human cells 20 January 2013Last updated at 14:19 ET By Jonathan Amos Science correspondent, BBC News A representation of the four-stranded structure (L) with fluorescent markers revealing its presence inside cells (R) Cambridge University scientists say they have seen four-stranded DNA at work in human cells for the first time. The famous "molecule of life", which carries our genetic code, is more familiar to us as a double helix. But researchers tell the journal Nature Chemistry that the "quadruple helix" is also present in our cells, and in ways that might possibly relate to cancer.

Looking At Tears Under A Microscope Reveals A Shocking Fact. Share on Facebook One day Rose-Lynn Fisher wondered if her tears of grief would look different from her tears of joy, so she began to explore them up close under a microscope. She studied 100 different tears and found that basal tears (the ones that our body produces to lubricate our eyes) are drastically different from the tears that happen when we are chopping onions. The tears that come about from hard laughter aren’t even close to the tears of sorrow. Like a drop of ocean water each tiny tear drop carries a microcosm of human experience. Her project is called The Topography of Tears.

A YouTube Video Is Doctor's Secret Weapon Against Back Pain Katherine Streeter for NPR A woman in her late 20s came to see me recently because her back hurt. She works at a child care center in town where she picks up babies and small children all day long. She felt a twinge in her lower back when hoisting a fussy kid. Scientists Discover Children’s Cells Living in Mothers’ Brains The link between a mother and child is profound, and new research suggests a physical connection even deeper than anyone thought. The profound psychological and physical bonds shared by the mother and her child begin during gestation when the mother is everything for the developing fetus, supplying warmth and sustenance, while her heartbeat provides a soothing constant rhythm. The physical connection between mother and fetus is provided by the placenta, an organ, built of cells from both the mother and fetus, which serves as a conduit for the exchange of nutrients, gasses, and wastes.

The Healing Power of Cat Purrs Those crazy cat ladies might be onto something. According to today’s infographic, our feline friends provide us with more than just emotional support. House cats may actually be contributing to our physical well-being. Science Theory Shows We Can Reprogram Our DNA to Heal Ourselves with Vibration As though to confirm the hunch many of us had that our ‘junk’ DNA was anything but disposable, researchers from the Gene and Stem Cell Therapy Program at Sydney’s Centenary Institute have proven that 97 percent of human DNA programs or encodes proteins in our bodies. One of the researchers involved in this study said, “this discovery, involving what was previously referred to as “junk,” opens up a new level of gene expression control . . .” This also means there are multiple modalities that mainstream science has yet to give a nod to, which just might re-train or reprogram our DNA — even cells which have become cancerous or are mutilated by the onslaught of toxins in our environment and negative emotional baggage which has been proven to have an undesirable impact on health. Many people have compared human DNA to the Internet. Chaos theory states that chaotic appearances are just a very complex system affected by very subtle changes in an almost infinite array of varying possibilities.