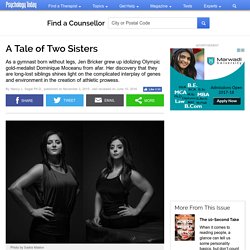 The youngest member of the team, 14-year-old Dominique Moceanu, had also been the country’s youngest-ever all-around individual national champion a year earlier. By the end of the Games, she was idolized by thousands of aspiring young gymnasts—and, as she would later discover, one little girl in particular. Moceanu’s life took several turns after her gold-medal performance: In 1998, at 17, she sued for emancipation from her parents, Romanian natives and former gymnasts who she claimed had squandered her earnings and been overly controlling, especially her father. In 2006, she married Michael Canales, a podiatric surgeon who had been a varsity gymnast at Ohio State. And then it did. Moceanu carried the envelope to her car, parked near a Walmart. Shocking Parallels of Separated Twins. Identical Twins Studies' Insights- Personalities. Find Out What Makes You Tick. Freud and neo freudians. Schedules of Reinforcement. 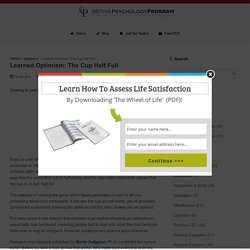 Now, this cup is unique in the fact that scholars and non scholars alike seem to wage a fierce debate over the contents of said cup. One side says that this proverbial cup is half empty, and the opposition adamantly argues that the cup is, in fact, half full. The exercise of viewing the glass within these parameters is said to tell you something about your personality. If you see the cup as half empty, you’re generally considered a pessimist. Viewing the glass as half full, then, makes you an optimist. For many years it was thought that a person’s perception of events as optimistic or pessimistic was hardwired, meaning people had to deal with what they had because there was no way to change it. Research and literature published by Martin Seligman, Ph.D, contradict the current belief. Download The Wheel of Life (PDF) For Free Yes, please send me the Wheel of Life.

Character Strengths Survey, Character Test: VIA Character. Movies are an art-form highly suited for inspiring character strengths and helping in the discovery, understanding and exploration of these positive aspects in human beings. 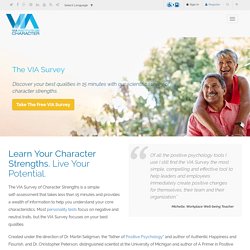 Ryan Niemiec (VIA's education director) and Danny Wedding explore 1,500 examples in their book Positive Psychology at the Movies, 2nd edition (2014). They explain that the best positive psychology movies meet the following criteria: Strong portrayal of a character's signature strengths which are critical to the character's identity; Depicts conflict/obstacles that challenge the character; The character uses strengths to overcome the adversity; The film's overall presentation is uplifting or speaks deeply to the human condition. The film holds great potential to generate cinematic elevation (i.e., it causes people to feel motivated to do good and increases their altruism) or cinematic admiration (i.e., it causes people to want to improve themselves and copy the model). 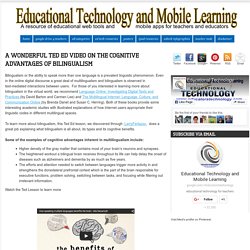 Even in the online digital discourse a great deal of multilingualism and bilingualism is observed in text-mediated interactions between users. For those of you interested in learning more about bilingualism in the virtual world, we recommend Language Online: Investigating Digital Texts and Practices (by David Barton and Carmen Lee) and The Multilingual Internet: Language, Culture, and Communication Online (by Brenda Danet and Susan C. Herring). Both of these books provide some interesting academic studies with illustrated explanations of how Internet users appropriate their linguistic codes in different multilingual spaces. To learn more about bilingualism, this Ted Ed lesson, we discovered through LarryFerlazzo, does a great job explaining what bilingualism is all about, its types and its cognitive benefits. Van Gogh’s Mental Illness: Was Epilepsy Responsible for His Madness & Genius?