Home · InitialState/piot-101 Wiki. ADS-B dump1090. What you can do with PlanePlotter and the dump1090 program. 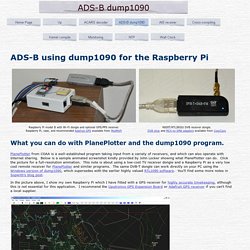 PlanePlotter from COAA is a well-established program taking input from a variety of receivers, and which can also operate with Internet sharing. Below is a sample animated screenshot kindly provided by John Locker showing what PlanePlotter can do. Click the picture for a full-resolution animation. Untitled.

You can now build and run your own ADS-B ground station that can be installed anywhere and receive real-time data directly from airplanes on your computer. 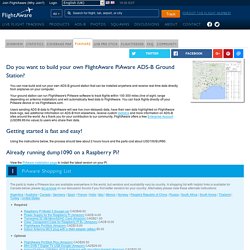 Your ground station can run FlightAware's PiAware software to track flights within 100-300 miles (line of sight, range depending on antenna installation) and will automatically feed data to FlightAware. You can track flights directly off your PiAware device or via FlightAware.com. Users sending ADS-B data to FlightAware will see live (non-delayed) data, have their own data highlighted on FlightAware track logs, see additional information on ADS-B from elsewhere, receive custom statistics and more information on ADS-B sites around the world. As a thank you for your contribution to our community, FlightAware offers a free Enterprise Account (USD89.95/mo value) to users who share their data. Using the instructions below, the process should take about 2 hours hours and the parts cost about USD100/EUR80. Raspberry Pi Ham Radio. 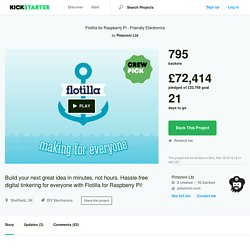 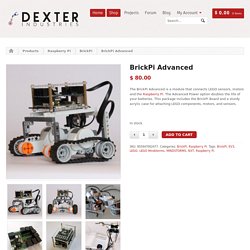 The Advanced Power option doubles the life of your batteries. This package includes the BrickPi Board and a sturdy acrylic case for attaching LEGO components, motors, and sensors. This product works with the Raspberry Pi Model B+. BrickPi Advanced is a system that converts Raspberry Pi into a Lego robot. The project is a board and case that connects LEGO® Mindstorms Sensors, motors, and parts to turn your credit card size computer into a robot. 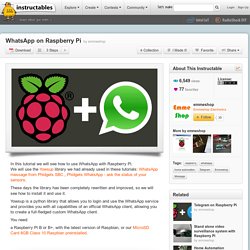 We will use the Yowsup library we had already used in these tutorials: WhatsApp message from Phidgets SBC , Phidgets WhatsApp - ask the status of your sensors. These days the library has been completely rewritten and improved, so we will see how to install it and use it. Yowsup is a python library that allows you to login and use the WhatsApp service and provides you with all capabilities of an official WhatsApp client, allowing you to create a full-fledged custom WhatsApp client. Raspberry Pi: Minecraft Server. Raspberry Pi. A popular DHCP server for the Pi is ISC's dhcpd. 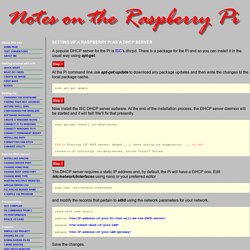 There is a package for the Pi and so you can install it in the usual way using apt-get. Step 1 At the Pi command line use apt-get update to download any package updates and then write the changes to the local package cache. Step 2 Now install the ISC DHCP server software. Sudo apt-get install isc-dhcp-server [FAIL] Starting ISC DHCP server: dhcpd[....] check syslog for diagnostics. ... failed! Invoke-rc.d: initscript isc-dhcp-server, action "start" failed. Step 3 The DHCP server requires a static IP address and, by default, the Pi will have a DHCP one.

Sudo nano /etc/network/interfaces and modify the records that pertain to eth0 using the network parameters for your network. iface eth0 inet static. Python Programming with Minecraft Pi: Early Draft. When I first heard that Minecraft would be released for the Raspberry Pi I punched the air. 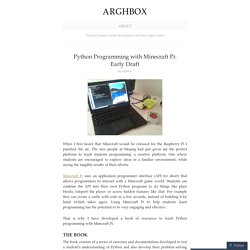 The nice people at Mojang had just given me the perfect platform to teach students programming: a creative platform. One where students are encouraged to explore ideas in a familiar environment, while seeing the tangible results of their efforts. Minecraft Pi uses an application programmer interface (API for short) that allows programmers to interact with a Minecraft game world. Students can combine the API into their own Python programs to do things like place blocks, teleport the player or access hidden features like chat. For example they can create a castle with code in a few seconds, instead of building it by hand (which takes ages). Minecraft: Pi Edition updates and downloads. 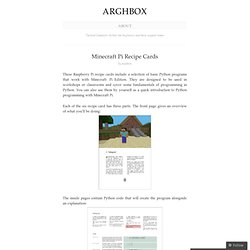 They are designed to be used in workshops or classrooms and cover some fundamentals of programming in Python. You can also use them by yourself as a quick introduction to Python programming with Minecraft Pi. Each of the six recipe card has three parts. The front page gives an overview of what you’ll be doing: The inside pages contain Python code that will create the program alongside an explanation: Tutorials & Technicalities: Compile Bitcoin Core on Raspberry Pi (Raspbian) If you want to run a full node on the Bitcoin network, you might want to do so on a computer that doesn't use so much power and is very inexpensive. 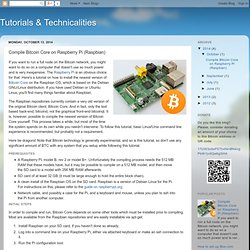 The Raspberry Pi is an obvious choice for that. Here's a tutorial on how to install the newest version of Bitcoin Core on the Raspbian OS, which is based on the Debian GNU/Linux distribution. If you have used Debian or Ubuntu Linux, you'll find many things familiar about Raspbian. The Raspbian repositories currently contain a very old version of the original Bitcoin client, Bitcoin Core. And in fact, only the text based back-end, bitcoind, not the graphical front-end bitcoinqt. Here be dragons! RasPi.TV. As promised the release code now supports @Raspberrypiface C&D plus the Blink(1) from @thingm. Raspberry Pi B+ & Pimoroni products review ( #raspberrypi #raspi #raspberry #raspberrypibplus ) 5 Awesome Raspberry Pi Builds. The RPiCluster. <Stuff about="code" />