Ancient Rockies fish fossils reveal origin of jaws. The next time you open wide to bite into a triple-decker sandwich, you'll be able to trace the origin of that ability back 505 million years — to a minnow-sized fish that once lived in a sea in what is now the Canadian Rockies. 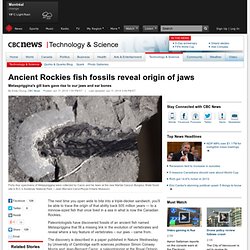 Paleontologists have discovered fossils of an ancient fish named Metaspriggina that fill a missing link in the evolution of vertebrates and reveal where a key feature of vertebrates – our jaws – came from. Great miscalculations: The French railway error and 10 others. 22 May 2014Last updated at 06:11 ET The discovery by the French state-owned railway company SNCF that 2,000 new trains are too wide for many station platforms is embarrassing, but far from the first time a small mis-measurement or miscalculation has had serious repercussions. 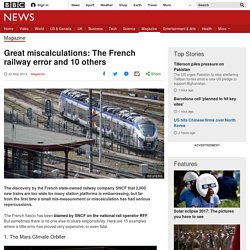 The French fiasco has been blamed by SNCF on the national rail operator RFF. But sometimes there is no-one else to share responsibility. Here are 10 examples where a little error has proved very expensive, or even fatal. 1. Is it legal to clone humans? Our picks of the week from around the web, including the end of food as we know it, the quest for immortality, and the legal realities of TV show Orphan Black. 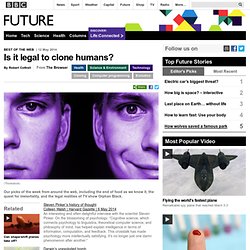 Steven Pinker’s history of thought Colleen Walsh | Harvard Gazette | 6 May 2014 An interesting and often delightful interview with the scientist Steven Pinker. On the blossoming of psychology: “Cognitive science, which connects psychology to linguistics, theoretical computer science, and philosophy of mind, has helped explain intelligence in terms of information, computation, and feedback.

This crosstalk has made psychology more intellectually satisfying. It’s no longer just one damn phenomenon after another.” Darwin’s unexploded bomb Ed West | Spectator | 6 May 2014 Human evolution has been “recent, copious, and regional”, with groups diverging strongly from one another in the past 50,000 years, and especially in the past 10,000 years. Nereus deep sea sub 'implodes' 10km-down.

12 May 2014Last updated at 06:16 ET By Jonathan Amos Science correspondent, BBC News At the time of its loss, Nereus was investigating the Kermadec Trench One of the world's most capable deep-sea research subs has been lost. 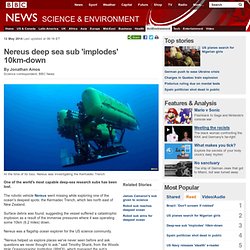 The robotic vehicle Nereus went missing while exploring one of the ocean's deepest spots: the Kermadec Trench, which lies north east of New Zealand. Surface debris was found, suggesting the vessel suffered a catastrophic implosion as a result of the immense pressures where it was operating some 10km (6.2 miles) down. Nereus was a flagship ocean explorer for the US science community.

"Nereus helped us explore places we've never seen before and ask questions we never thought to ask," said Timothy Shank, from the Woods Hole Oceanographic Institution (WHOI), which managed the sub's activities. The $8m (£4.7m) robot was built in 2008 and could operate in an autonomous mode or remotely controlled via a tether to a support ship to explore the Earth's deepest oceanic trenches. 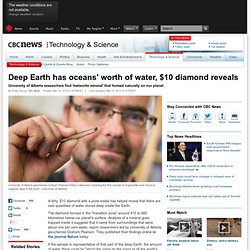 The diamond formed in the "transition zone" around 410 to 660 kilometres below our planet's surface. Analysis of a mineral grain trapped inside it suggests that it came from surroundings that were about one per cent water, report researchers led by University of Alberta geochemist Graham Pearson. They published their findings online in the journal Nature today. If the sample is representative of that part of the deep Earth, the amount of water there could be "about the same as the mass of all the world’s oceans combined," wrote Hans Keppler, a geophysicist at the University of Bayreuth in Germany, in an analysis article.

That, in turn, changes our understanding of the way water cycles through our planet, and has implications for the way tectonic plates and volcanoes behave, Pearson notes. Meteorite mineral from Earth. Greenhouse gas levels hit new record high - Technology & Science. Atmospheric volumes of greenhouse gases blamed for climate change hit a new record in 2012, the World Meteorological Organisation (WMO) said on Wednesday. 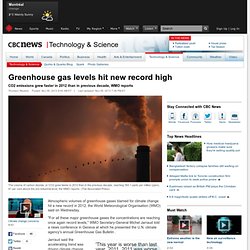 "For all these major greenhouse gases the concentrations are reaching once again record levels," WMO Secretary-General Michel Jarraud told a news conference in Geneva at which he presented the U.N. climate agency's annual Greenhouse Gas Bulletin . 'This year is worse than last year, 2011. 2011 was worse than 2010. India Mars launch - News - CBC Player. Scientists decipher dog-tail wags. 31 October 2013Last updated at 13:24 ET By Rebecca Morelle Science reporter, BBC World Service According to the scientists, a dog's tail wag can reveal its mood Scientists have shed more light on how the movements of a dog's tail are linked to its mood. 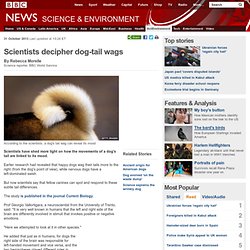 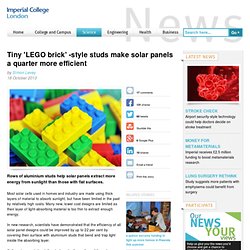 Most solar cells used in homes and industry are made using thick layers of material to absorb sunlight, but have been limited in the past by relatively high costs. Many new, lower cost designs are limited as their layer of light-absorbing material is too thin to extract enough energy. In new research, scientists have demonstrated that the efficiency of all solar panel designs could be improved by up to 22 per cent by covering their surface with aluminium studs that bend and trap light inside the absorbing layer. Body heat-powered flashlight wins - CBC News Vancouver at 6 - CBC Player. Science & Environment - Is time travel possible? How A Car Engine Works (animated infographic) Wave power generator bags Dyson award. 12 September 2013Last updated at 17:02 ET By Mark Ward Technology correspondent, BBC News A scale model of the wave power generator has been tested in a large water tank A wave power generator that can harvest energy no matter which way the sea is running has won the UK round of James Dyson's engineering award. 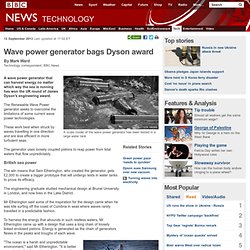 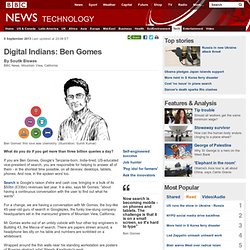 (Illustration: Sumit Kumar) What do you do if you get more than three billion queries a day? If you are Ben Gomes, Google's Tanzania-born, India-bred, US-educated vice-president of search, you are responsible for helping to answer all of them - in the shortest time possible, on all devices: desktops, tablets, phones. And now, in the spoken word too. 'Walkie-Talkie' skyscraper melts Jaguar car parts. 2 September 2013Last updated at 10:49 ET The BBC's Andrew Verity surveys the damage caused by the skyscraper A new London skyscraper dubbed the "Walkie-Talkie" has been blamed for reflecting light which melted parts of a car parked on a nearby street.

Martin Lindsay parked his Jaguar on Eastcheap, in the City of London, on Thursday afternoon. 'Molecular basis' for jet lag found. 29 August 2013Last updated at 21:49 ET By James Gallagher Health and science reporter, BBC News Scientists believe they have figured out why it takes us so long to adapt when we travel to new time zones. Researchers at Oxford University say they have found the "molecular brakes" that prevent light resetting the body clock when we fly - causing jet lag.

Experiments, reported in the journal Cell, showed "uncoupling" these brakes in mice allowed them to rapidly adapt. Researchers hope the discovery will help find new drugs for jet lag and mental health treatments. The body clock keeps us in tune with the pattern of day and night. Light acts like a reset button to keep the clock to time, but when we fly around the world it takes time for our body clocks to adjust. Master clock The research team, funded by The Wellcome Trust, was trying to figure out why people do not instantly adapt.

They were looking for sections of DNA that changed their activity levels in response to light. University of St Andrews scientists create 'fastest man-made spinning object' 28 August 2013Last updated at 11:27 ET The red squiggles indicate the polarisation of the light beam, which changes as it goes through the purple sphere A team of researchers claims to have created the world's fastest spinning man-made object. They were able to levitate and spin a microscopic sphere at speeds of up to 600 million revolutions per minute. This spin speed is half a million times faster than a domestic washing machine and more than a thousand times faster than a dental drill. Evidence for new periodic table element boosted. 27 August 2013Last updated at 10:26 ET The new element has not yet been confirmed by the official body for chemistry and physics Scientists have presented new evidence for the existence of an unconfirmed element with atomic number 115.

The element is highly radioactive and exists for less than a second before decaying into lighter atoms. Tomorrow's cities: How the Venus Project is redesigning the future. 25 August 2013Last updated at 19:34 ET Is it possible to create a radically different society? One where material possessions are unnecessary, where buildings are created in factories, where mundane jobs are automated? Would you want to live in a city where the main aim of daily life is to improve personal knowledge, enjoy hobbies, or solve problems that could be common to all people in order to improve the standard of living for everyone? Some may think it is idealistic, but 97-year old architect Jacque Fresco is convinced his vision of the future is far better than how we live today.

Elon Musk unveils 'Hyperloop' idea. Giant gas platform sunk: Time-lapse footage. The South Korean buses powered by an electric road. Uld we grow our own meat at home? Newsbeat - Britain's biggest 'fatberg' removed from London sewer. World's first lab-grown burger is eaten in London. Science & Environment - Will we ever … have reliable nuclear fusion power? For decades scientists have tried to generate an untapped source of energy by creating the conditions inside stars.