Do not worry, it is normal to feel stressed!

While there are negative impacts that come about with stress, it is important for all the young adults out there to know that they are definitely not alone.

Those who are feeling like they are crumbling at the various kinds of pressure they are put under - School, Relationships, body image, Financial issues etc, it might be a part of growing up and there are others out there who are struggling as well. The Most Stressed-Out Generation? Young Adults. The latest survey shows stress is on the decline overall but still hover above healthy levels, especially for young adults. 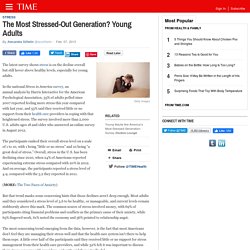 In the national Stress in America survey, an annual analysis by Harris Interactive for the American Psychological Association, 35% of adults polled since 2007 reported feeling more stress this year compared with last year, and 53% said they received little or no support from their health care providers in coping with that heightened stress. The survey involved more than 2,000 U.S. adults ages 18 and older who answered an online survey in August 2012.

The participants ranked their overall stress level on a scale of 1 to 10, with 1 being “little or no stress” and 10 being “a great deal of stress.” Overall, stress in the U.S. has been declining since 2010, when 24% of Americans reported experiencing extreme stress compared with 20% in 2012. And on average, the participants reported a stress level of 4.9, compared with the 5.2 they reported in 2011. Young adults spend more than six hours per day feeling ‘stressed out’, finds Mental Health study. Young adults spend more than six hours a day "stressed out", a study has found. 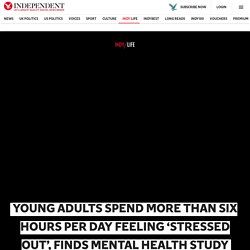 A poll of 1,000 18-25-year-olds found money, appearance and career worries as well as fears about the future mean a large chunk of their time is spent feeling anxious or under pressure. But one in 10 feel they have no-one to turn to discuss their concerns, leaving them to face their fears alone. Download the new Independent Premium app Sharing the full story, not just the headlines A further 67 per cent admitted they had come across problems in their life where they felt they had nobody to lean on for help.

As a result, 56 per cent have ended up in more trouble after keeping a problem to themselves rather than confiding in someone else. The statistics emerged in a study by charity, UK Youth, to launch its #KeepMeSafe campaign, which calls on all organisations working with young people to "look" at their safeguarding policies, "listen" to young people and take action during National Safeguarding Month. 1. 2. Young Adults Are America's Most Stressed Generation: Survey – WebMD. THURSDAY, Feb. 7 (HealthDay News) -- Young Americans between 18 and 33 years old -- the so-called millennials -- are more stressed than the rest of the population, according to a new report from the American Psychological Association. 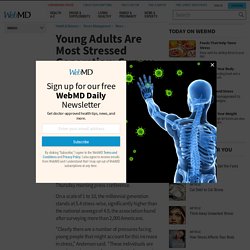 What's stressing them out? Jobs and money mostly, said Norman Anderson, CEO of the American Psychological Association, during a Thursday morning press conference. On a scale of 1 to 10, the millennial generation stands at 5.4 stress-wise, significantly higher than the national average of 4.9, the association found after surveying more than 2,000 Americans. "Clearly there are a number of pressures facing young people that might account for this increase in stress," Anderson said. "These individuals are growing up in an era of unprecedented economic upheaval. Getting a job, starting a family and repaying student loans are all stressful, he added.

These young adults also don't feel they're getting support from the health system. The ‘storm and stress’ of adolescence and young adulthood - Counseling Today. For much of human history, the idea of adolescence being a distinct life stage was nonexistent. 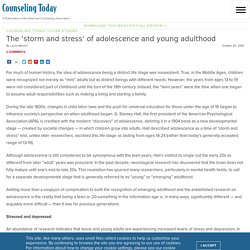 True, in the Middle Ages, children were recognized not merely as “mini” adults but as distinct beings with different needs. However, the years from ages 13 to 19 were not considered part of childhood until the turn of the 19th century. Instead, the “teen years” were the time when one began to assume adult responsibilities such as making a living and starting a family. During the late 1800s, changes in child labor laws and the push for universal education for those under the age of 16 began to influence society’s perspective on when adulthood began. G. Although adolescence is still considered to be synonymous with the teen years, Hall’s instinct to single out the early 20s as different from later “adult” years was prescient. Stressed and depressed An abundance of research indicates that teens and young adults are experiencing increased levels of stress and depression.

Under pressure. Teen stress from a teen perspective.