IATE - The EU's multilingual term base. Keybr. This is keybr.com, a web application that will help you teach touch typing. 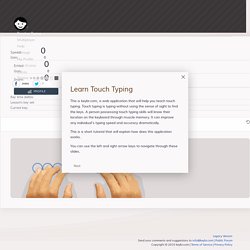 Touch typing is typing without using the sense of sight to find the keys. A person possessing touch typing skills will know their location on the keyboard through muscle memory. It can improve any individual's typing speed and accuracy dramatically. This is a short tutorial that will explain how does this application works. You can use the left and right arrow keys to navigate through these slides. This tutorial is based on these few principles: No boring, repetitive exercises. Initially it starts generating words from a small subset of the most frequent letters of the alphabet. When you are typing these words, keybr measures time to type a key for every letter in that subset. Once you familiarize yourself with the current subset of letters, the algorithm expands it, adding more and more letters to it.

So at any time, you will by typing the letters you are least familiar with. This is the text board. ? ? ? ? ? Chineasy. How to say in different languages translation. Free Language Lessons: Learn Spanish, Learn Mandarin, & more. Say what you type in French : Say what you type in Spanish. The best way to start with French and Spanish! 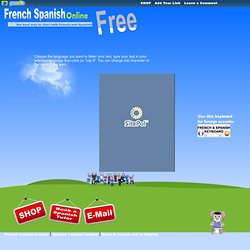 Choose the language you want to listen your text, type your text in your selected language then click on "say it". You can change the character or the voice if you want. Use this keyboard for foreign accents: Lingocracy. University of Cambridge Language Centre. Overview This is a web-application developed by the University of Cambridge Language Centre for basic level students of German. 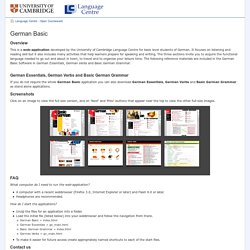 It focuses on listening and reading skill but it also includes many activities that help learners prepare for speaking and writing. The three sections invite you to acquire the functional language needed to go out and about in town, to travel and to organise your leisure time. Lang-8 is foreign language learning service. BBC Active. MYLO: a new way to learn languages.

German language > Movies in German with German subtitles Add movie to this section On this page you will find a list of movies in German that you may use to learn and improve your German. 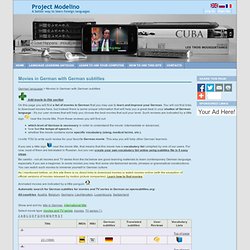 You will not find links to download movies here, but instead there is some unique information that will help you a great deal in your studies of German language - it's our user reviews that will help you choose the best movies that suit your level. Such reviews are indicated by a little sign near the movie title. Which level of German is necessary in order to understand the movie: intermediate or advanced, how fast the tempo of speech is, whether the movie contains some specific vocabulary (slang, medical terms, etc.).

I invite YOU to write such review for your favorite German movie. If you see a little sign near the movie title, that means that this movie has a vocabulary list compiled by one of our users. Animated movies are indicated by a little penguin Titles marked with asterisk (*) are TV series. Mediathek Videos - Startseite. Mediathek Videos Sie befinden sich hier: Mediathek Videos. 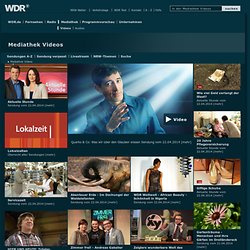 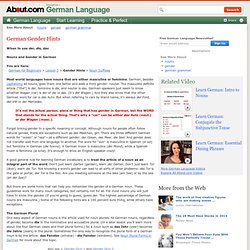 German, besides capitalizing all nouns, goes them one better and adds a third gender: neuter. The masculine definite article (“the”) is der, feminine is die, and neuter is das. German-speakers just seem to know whether Wagen (car) is der or die or das. It's not the actual person, place or thing that has gender in German, but the WORD that stands for the actual thing. Forget linking gender to a specific meaning or concept.

A good general rule for learning German vocabulary is to treat the article of a noun as an integral part of the word. But there are some hints that can help you remember the gender of a German noun. The German Plural One easy aspect of German nouns is the article used for noun plurals. Also see > Gender Quiz 1 and Gender Quiz 2 Self-scoring quizzes to test your mastery of noun genders Related Pages. German Words and Phrases. 1. 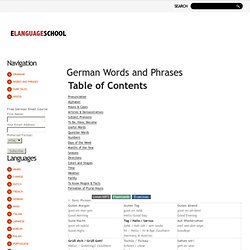 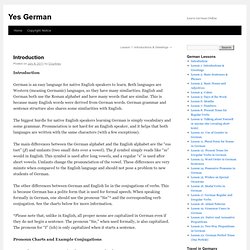 Both languages are Western (meaning Germanic) languages, so they have many similarities. English and German both use the Roman alphabet and have many words that are similar. Interactive German Exercises.