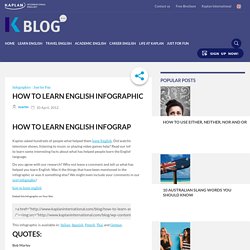 Did watching television shows, listening to music or playing video games help? Read our infographic to learn some interesting facts about what has helped people learn the English language. Do you agree with our research? Why not leave a comment and tell us what has helped you learn English. Was it the things that have been mentioned in the infographic or was it something else? Embed this Infographic on Your Site: <a href=" src=" alt="how to learn english" /><br /></a><a href=" to learn English</a><a href=" via Kaplan Blog</a> This infographic is available in: Italian, Spanish, French, Thai and German. Quotes: Bob Marley “Our father’s legendary music has touched and moved so many people. Spider-Man Junko Kobayashi, President of The Stan Lee Foundation, said: “The Stan Lee Foundation also believes that superheroes have a role in education by promoting learning.

Friends. The-importance-of-learning-languages-for-trav-L-XKWJGC. HOMEWORK. The Truth of Studying a Foreign Language. Monolingual VS Bilingual. Monolingual Vs Bilingual Are two languages better than one? 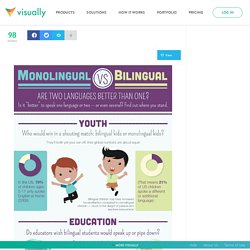 Is it "better" to speak one language or two - or even several? Find out where you stand? Youth Who would win in a shouting match: bilingual kids or monolingual kids? They'll both yell your ear off: their global numbers are about equal In the US, 79% of children ages 5-17 only speak English at home (2009) (That means 21% of US children spoke a different or additional language) Bilingual children may have increased focus/attention compared to monolingual children - much to the delight of parents and teachers everywhere! Education Do educators wish bilingual students would speak up or pipe down? Depends on where they live! In Belgium, Dutch monolingualism is strongly enforced in schools - conversing in other languages is actually formally reprimanded!

In 68% of studied EU countries, over 3 in 4 university students were learning 2+ languages By 2014, the UK will require instruction in French, Spanish, German, Mandarin, Latinm or Greeky by age 7. Is English the language of love? Students' Attitudes Towards Learning English Pronunciation. Author: JennyCoPoints: 10 Not Ranked Yet Today, when the English language represents a lingua franca, it is important for people all over the world to become proficient in it. 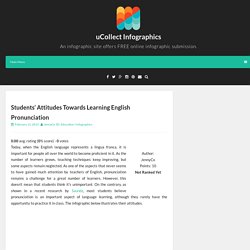 As the number of learners grows, teaching techniques keep improving, but some aspects remain neglected. As one of the aspects that never seems to have gained much attention by teachers of English, pronunciation remains a challenge for a great number of learners. However, this doesn’t mean that students think it’s unimportant. On the contrary, as shown in a recent research by Saundz, most students believe pronunciation is an important aspect of language learning, although they rarely have the opportunity to practice it in class. Download this infographic. 994 Total Views 11 Views Today. How To Teach English Infographic. Kaplan love researching the world of ESL education and finding out more about how people learn English. 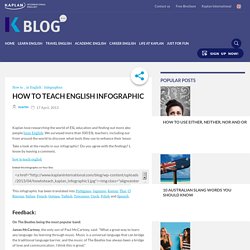 We surveyed more than 500 ESL teachers, including our own, from around the world to discover what tools they use to enhance their lessons. Take a look at the results in our infographic! Infographic: English Pronunciation Learning Trends. Following our recently published white paper on students’ attitudes towards learning English pronunciation, we decided to create a visual summary that would better explain the key findings from our survey. 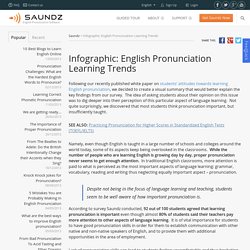 The idea of asking students about their opinion on this issue was to dig deeper into their perception of this particular aspect of language learning. Not quite surprisingly, we discovered that most students think pronunciation important, but insufficiently taught. CLASSROOM WORK. Depeche Mode - People Are People (Remastered Video) Learn different languages 2013 Commercial [hospital] HOMEWORK. Language School TV Commercial - Hilarious! Avista Language School Commercial - Fish and Cat.

Why learn English. Do you remember the german coastguard??? 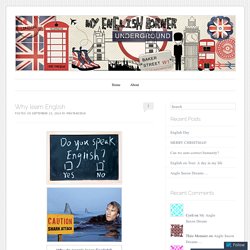