Disrupting the Humanities. 10 12 kaltheuner. Investing in Humanities Publishing. To be honest, I didn’t know what to expect when I arrived at the headquarters of the Association of American Universities in Washington, D.C. early last week to take part in a discussion about a new model for open access digital monograph publishing in the humanities. 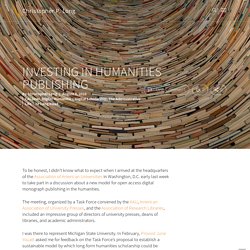 The meeting, organized by a Task Force convened by the AAU, American Association of University Presses, and the Association of Research Libraries, included an impressive group of directors of university presses, deans of libraries, and academic administrators. I was there to represent Michigan State University. In February, Provost June Youatt asked me for feedback on the Task Force’s proposal to establish a sustainable model by which long-form humanities scholarship could be published in a digital open access format. The proposal called for up-front institutional funding for the open access publication of manuscripts accepted through standing AAUP best practices for peer review.

I was enthusiastic. The Costs of Publishing Monographs. The University Press business model faces numerous challenges today, with revenues under pressure due to a host of factors, from the decline of bricks-and-mortar stores and shifting library purchase patterns to the still emerging distribution and revenue models made possible by digital books. 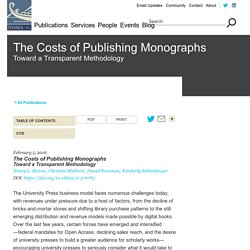 Over the last few years, certain forces have emerged and intensified—federal mandates for Open Access, declining sales reach, and the desire of university presses to build a greater audience for scholarly works—encouraging university presses to seriously consider what it would take to make their scholarly monographs openly available. In April 2014, The Andrew W. The Cost to Publish a Monograph is Both Too Low and Too High – IO: In The Open. A Taxonomy of University Presses Today. There is an effort afoot in the university press and higher education communities to transition humanities monographs to open access, which to some is a vital element of repositioning humanities fields to take a more public role. 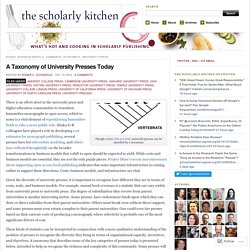 Ithaka S+R colleagues have played a role in developing cost estimates for monograph publishing, several presses have led subvention modeling, and others have reflected thoughtfully on the broader transformations in business models that a shift to open should be expected to yield. While costs and business models are essential, they are not the only puzzle pieces. Open Access Week - October 24 - 30, 2016. L i b r a r i a. Politics in academic publishing: past to present. [This post by Anna Gielas first appeared on TheStudentBlog at PLOS on 14 June 2016] “Academic publishers make Murdoch look like a socialist”. 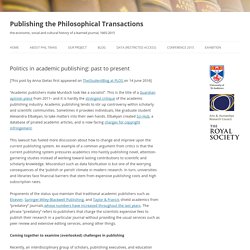 This is the title of a Guardian opinion piece from 2011– and it is hardly the strongest critique of the academic publishing industry. Academic publishing tends to stir up controversy within scholarly and scientific communities. Sometimes it provokes individuals, like graduate student Alexandra Elbakyan, to take matters into their own hands. Elbakyan created Sci-Hub, a database of pirated academic articles, and is now facing charges for copyright infringement. 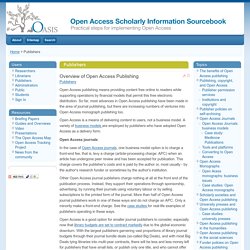 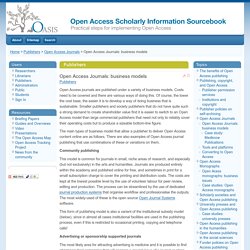 Costs need to be covered and there are various ways of doing this. Of course, the lower the cost base, the easier it is to develop a way of doing business that is sustainable. Welcome to OAPEN. Log In. That is the argument Elsevier made, supported by a raft of industry amicus briefs, when it filed suit against Ms. 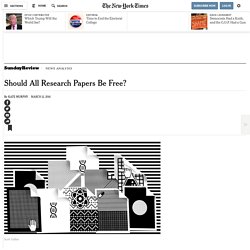 Elbakyan, resulting in an injunction last fall against her file-sharing website, Sci-Hub. “It’s as if somehow stealing content is justifiable if it’s seen as expensive, and I find that surprising,” said Alicia Wise, director of universal access at Elsevier. “It’s not as if you’d walk into a grocery store and feel vindicated about stealing an organic chocolate bar as long as you left the Kit Kat bar on the shelf.” But since a federal court order isn’t enforceable in Russia (Ms. Elbakyan won’t confirm where she is exactly), much less on the Internet, Sci-Hub continues to deliver hundreds of thousands of journal articles per day to a total of 10 million visitors. In response to the suit filed against her, Ms. “That is very different from the music or movie industry, where creators receive money from each copy sold,” Ms. Mr.