MODES OF TEACHING. SENCOP. Social influence. Learning styles. Is psychology a science. What is AUDIENCE EFFECT? definition of AUDIENCE EFFECT (Psychology Dictionary) The influence of the presence of other people on an individual's behavior. 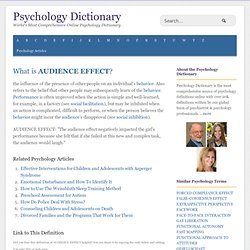 Also refers to the belief that other people may subsequently learn of the behavior. Performance is often improved when the action is simple and well-learned, for example, in a factory (see social facilitation), but may be inhibited when an action is complicated, difficult to perform, or when the person believes the behavior might incur the audience's disapproval (see social inhibition). AUDIENCE EFFECT: "The audience effect negatively impacted the girl's performance because she felt that if she failed at this new and complex task, the audience would laugh. " Link to This Definition. Social Roles and Social Norms. By Saul McLeod published 2008 There are many ways that people can influence our behavior, but perhaps one of the most important is that the presence of others seems to set up expectations We do not expect people to behave randomly but to behave in certain ways in particular situations. 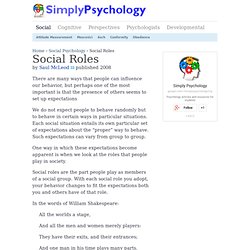 Social Psychology: Groups. Social psychologists consider a group to be composed of two or more people who interact and depend on each other in some way. 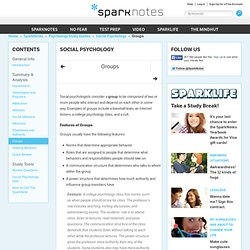 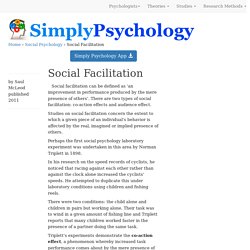 There are two types of social facilitation: co-action effects and audience effect. Studies on social facilitation concern the extent to which a given piece of an individual's behavior is affected by the real, imagined or implied presence of others. Perhaps the first social psychology laboratory experiment was undertaken in this area by Norman Triplett in 1898. In his research on the speed records of cyclists, he noticed that racing against each other rather than against the clock alone increased the cyclists' speeds. He attempted to duplicate this under laboratory conditions using children and fishing reels. There were two conditions: the child alone and children in pairs but working alone. Triplett's experiments demonstrate the co-action effect, a phenomenon whereby increased task performance comes about by the mere presence of others doing the same task. 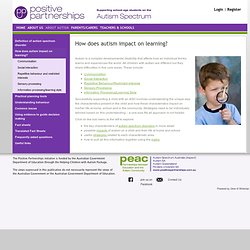 All children with autism are different but they share difficulties in five core areas. These include: Successfully supporting a child with an ASD involves understanding the unique way the characteristics present in the child and how these characteristics impact on his/her life at home, school and in the community. Strategies need to be individually tailored based on this understanding – a one-size fits all approach is not helpful. Click on the sub menu to the left to explore: the key characteristics of autism spectrum disorders in more detail possible impacts of autism on a child and their life at home and school useful strategies related to each characteristic area how to pull all this information together using the matrix. 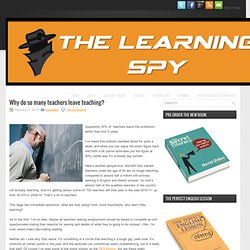 I’ve heard this statistic bandied about for quite a while, and while you can argue the exact figure back and forth a bit (some estimates put the figure at 40%) either way it’s a bloody big number. Here’s another perspective: 404,600 fully trained teachers under the age of 60 are no longer teaching, compared to around half a million still actively working in English and Welsh schools. So that’s almost half of the qualified teachers in the country not actually teaching. And it’s getting worse: some 47,700 teachers left their jobs in the year 2010-11, up from 40,070 in 2009-10. Why are teachers leaving education? With England having one of the youngest teaching workforces in the OECD, especially at primary level, it is hard to know whether to celebrate or despair. 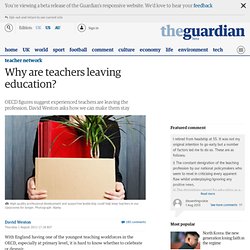 Clearly things seem to be going well with recruiting new, young teachers into the profession, yet it is strange that so many of our more experienced teachers are leaving in such large numbers. We need to act urgently to eradicate some of the causes of high turnover and ensure that wisdom and experience is not being lost but being effectively spread around the school system. When you look in detail, the figures for the 31 OECD countries are stark. With 20% of our secondary teachers aged under 30, we have the second youngest workforce after Indonesia. Why Teachers leave the Profession, and what they do next! The reasons why teachers leave the profession and following other careers have continually been the focus for research, but very little follow up research has explored the career paths teachers follow once they quit the profession. Our on-going online survey (click here to participate) has asked teachers across the world why colleagues have left the profession, as well as what different career path they followed.

We have compiled an infographic to summarise the answers (click image to enlarge), with full responses below… Click to see full-size Here are the responses: (You can sort each column by clicking the arrows on the top row - last updated 08.45 GMT November 14, 2013) 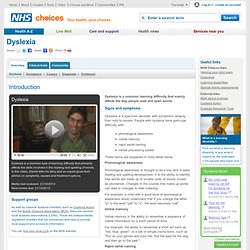 Signs and symptoms. Helping your Child at Home. There are a wide variety of resources which parents could employ to help dyslexic children at home. 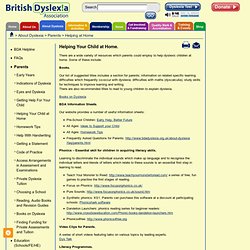 Some of these include: Books. Our list of suggested titles includes a section for parents; information on related specific learning difficulties which frequently co-occur with dyslexia; difficulties with maths (dyscalculia); study skills for techniques to improve learning and writing. Getting an Assessment for Dyslexia. Dyslexia is not considered a medical issue and forms no part of medical training. 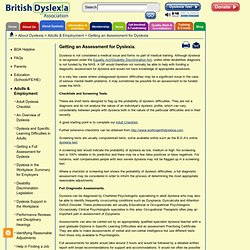 Although dyslexia is recognised under the Equality Act/Disability Discrimination Act, unlike other disabilities diagnosis is not funded by the NHS. A GP would therefore not normally be able to help with funding a diagnostic assessment for dyslexia and would not have knowledge of appropriate assessors. In a very few cases where undiagnosed dyslexic difficulties may be a significant issue in the case of serious mental health problems, it may sometimes be possible for an assessment to be funded under the NHS.

Checklists and Screening Tests. These are short tests designed to flag up the probability of dyslexic difficulties. Dyslexia - Diagnosis. The earlier a child with dyslexia is diagnosed, the more effective their treatment is likely to be. In practice, however, identifying dyslexia in younger children can be difficult for both parents and teachers, because the signs and symptoms are not always obvious. Many children, including younger children, also develop ways to compensate for their dyslexia, such as relying on their long-term memory more than is usual, or by "picturing" the whole word. If you are worried about your child If you are concerned about your child’s progress with reading and writing, first talk to their teacher.

You may also want to meet with other staff in the school. If the concern continues, take your child to visit a GP. Vision problems, such as short-sightedness or a squint hearing problems, as the result of a condition such as glue ear other conditions, such as attention deficit hyperactivity disorder (ADHD) Assessments.

Dyslexia - Treatment. While dyslexia is a lifelong problem, there is a range of specialist educational interventions that can help children with dyslexia with their reading and writing. The amount and type of intervention necessary will depend on the severity of their condition. In some cases, a specific action plan for your child can be drawn up and implemented by their school. Most children with dyslexia will only need to miss a few hours of their regular classes each week to receive specialist one-to-one teaching, or teaching in small groups.

A small number of children with dyslexia may need to be transferred to a specialist school. Many specialist schools charge a fee, although financial support may be available from your Local Educational Authority (LEA). Early educational interventions Research has found that early educational interventions, ideally before a child reaches seven or eight years old, are the most effective way of achieving long-term improvements in their reading and writing. Structure Adults. Hope for millions as scientists find 'cure' for dyslexia. By JENNY HOPE Last updated at 07:54 30 October 2006 Millions of people with dyslexia have been given hope by a set of simple exercises that experts say can cure the disorder. A new study found the revolutionary treatment transformed the reading and writing skills of children with dyslexia. Aboutdyslexia5. It makes no sense to talk of 'cure' when dyslexia is not a disease. Dyslexics simply have different brains that find reading difficult, just as some of us find piano playing difficult.

However our society places such great emphasis on reading and spelling that dyslexia can undoubtedly present problems - most of which stem from others' lack of recognition and understanding. However, many dyslexics (some of them featured on our site case studies), have exceptional 'holistic' visuospatial skills and they value the gifts which their dyslexia has given them, and so do some employers who understand the talents that dyslexia can confer. Dyslexia Support in the Workplace. Getting help. Dyslexia Support Groups. Are you worried that your child may be dyslexic? Liverpool Dyslexia Advice. Dyslexia - Causes.

What Is Dyslexia? What Causes Dyslexia? Aboutdyslexia3. Dyslexia - Symptoms. The symptoms of dyslexia can differ from person to person, and each individual with the condition will have a unique pattern of strengths and weaknesses. Test for Dyslexia: 37 Common Symptoms.