13-Year-Old's Death Is Latest Tragedy For Island Surrounded By Shark-Infested Waters. On the morning of April 12, before 13-year-old Elio Canestri was killed by a shark while surfing at a beach in his native Reunion Island, he left a note for his mother. 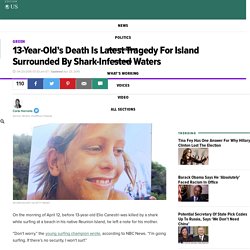 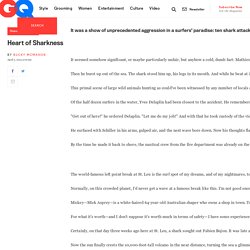 He hadn't had a chance to catch a single wave. In a case of bad timing within worse, the 32-year-old bodyboarder, a former French champion and the owner of a local surf school, had launched from the beach as one of the biggest sets of the day humped on the horizon. Girl killed in Reunion shark attack. Shark kills surfer, 13, off Reunion in Indian Ocean. Daily Telegraph. To use this website, cookies must be enabled in your browser. To enable cookies, follow the instructions for your browser below. Facebook App: Open links in External Browser There is a specific issue with the Facebook in-app browser intermittently making requests to websites without cookies that had previously been set. 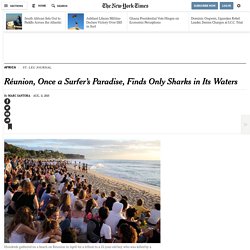 The island has been besieged by them, and at least 18 people have been attacked and seven have been killed since 2011. The government responded in 2013 with a controversial ban on nearly all surfing and swimming, making Réunion perhaps the world’s only island destination to order residents and tourists to stay out of the water. The ocean cast up another way for Réunion to make headlines late last month, when a piece of a jet’s wing was found on a beach.