8 million Android users tricked into downloading 85 adware apps from Google Play. Huawei unveils Harmony operating system, won't ditch Android for smartphones, Digital News. Artificial intelligence could help couples reach a divorce settlement with lesser cost: Here is how. Now Facebook is allowing anyone to look you up using your security phone number. And I mean, geez, stuff like this with Facebook just isn’t a surprise anymore, is it? 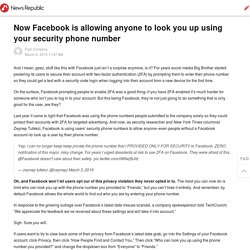 How an everyday guy makes $500,000 a year playing Fortnite. In context: Esports is a booming industry and there’s lots of money to be made. 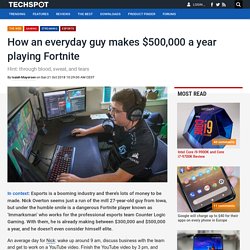 Nick Overton seems just a run of the mill 27-year-old guy from Iowa, but under the humble smile is a dangerous Fortnite player known as ‘Immarksman’ who works for the professional esports team Counter Logic Gaming. With them, he is already making between $300,000 and $500,000 a year, and he doesn’t even consider himself elite. Dual Boot vs. Virtual Machine: Which One Is Right for You? If you want to run multiple operating systems on one machine, or multiple copies of the same operating system, then you only have two ways to do it: dual boot or virtual machine. 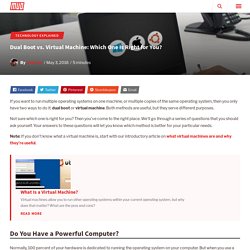 5 Ways to Generate a List of All Installed Programs in Windows. You’ve probably installed many programs over time on your Windows PC and you probably don’t remember all of them. 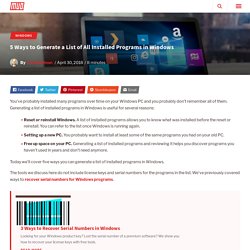 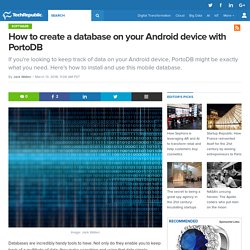 Not only do they enable you to keep track of a multitude of data, they make searching and using that data simple. Working with databases on a desktop is quite easy. You could make use of a full-blown office suite such as LibreOffice that includes a powerful database with a vast array of features. But what if your primary device is of the Android variety? These Gmail searches will dig up stuff you never knew you missed. 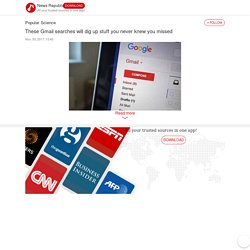 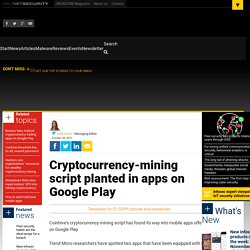 Trend Micro researchers have spotted two apps that have been equipped with it: The first (prsolutions.rosariofacileads) is an app that is meant to help users pray the rosary, the second one (com.freemo.safetyne) allows users to “earn free Talk, Text, and Data” by racking up credits “by redeeming local coupons and deals, watching videos, taking surveys and more.” “Both of these samples do the same thing once they are started: they will load the JavaScript library code from Coinhive and start mining with the attacker’s own site key,” the researchers explained. Windows 8 and Later Fail to Properly Apply ASLR, Here's How to Fix. Windows 8, Windows 8.1, and subsequent Windows 10 variations fail to properly apply ASLR, rendering this crucial Windows security feature useless. 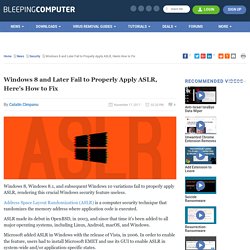 Address Space Layout Randomization (ASLR) is a computer security technique that randomizes the memory address where application code is executed. ASLR made its debut in OpenBSD, in 2003, and since that time it's been added to all major operating systems, including Linux, Android, macOS, and Windows. Microsoft added ASLR in Windows with the release of Vista, in 2006.

In order to enable the feature, users had to install Microsoft EMET and use its GUI to enable ASLR in system-wide and/or application-specific states. With the release of the Windows 10, ASLR was added to the Windows Defender Exploit Guard, and users can now enable it via the Windows Defender Security Center (under App & browser control and then Exploit protection settings). The Easiest Way to Run Windows Programs on Mac. Mac software is awesome, but there’s no denying that Windows software is widespread. 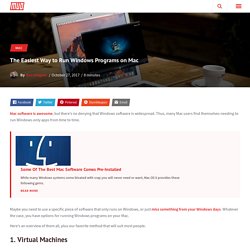 Thus, many Mac users find themselves needing to run Windows-only apps from time to time. Some Of The Best Mac Software Comes Pre-Installed Some Of The Best Mac Software Comes Pre-Installed While many Windows systems come bloated with crap you will never need or want, Mac OS X provides these following gems. Read More Maybe you need to use a specific piece of software that only runs on Windows, or just miss something from your Windows days. Whatever the case, you have options for running Windows programs on your Mac. Estonians look to push Europe into being a real digital leader. Estonia does digital big time. 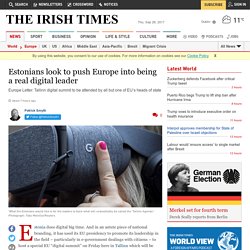 Svatantra Microfin launches cashless solution ‘Saathi’ Launches cashless solution Mumbai, June 29: BizEDGE NZ - Supply chain management software market to exceed US$13b by end of the year - Gartner. The supply chain management (SCM) market will exceed US$13billion in total software revenue by the end of 2017, up 11% from 2016 according to Gartner research. It is on pace to exceed US$19billion by 2021, as software as a service (SaaS) enables new revenue opportunities.

"Between 2017 and 2021, Gartner forecasts nearly US$6billion in total software revenue will be added to the SCM market," says Chad Eschinger, Gartner managing vice president. "Digitalisation is increasing demand for agility and forcing new business models, which is boosting spending in the SCM market.

" SCM providers are already differentiating themselves from competitors and driving revenue growth by incorporating new digital business technologies, such as mobile, machine learning, in-memory technologies, multienterprise visibility and the Internet of Things (IoT), into their offerings. Chancellor commits funds to help create 'world class digital infrastructure' The investment of £1 billion in high-speed fibre broadband across the country and 5G mobile data trials will help create a "world class digital infrastructure" to boost the UK's productivity, Chancellor Philip Hammond has said.

As part of a new National Productivity Fund worth £23 billion that will also include increased spending on the driverless car research, the Government will provide investment to private sector businesses to roll out full fibre broadband by 2021. "Our future transport, business and lifestyle needs will require world class digital infrastructure to underpin them," the Chancellor said in his Autumn Statement. He added that he wanted to make the UK a "world leader in 5G" with investment in trials to aid the roll out of the technology. The Chancellor also announced that from April next year the Government will introduce 100% business rates relief, for a five-year period, to support further roll out of fibre broadband infrastructure.

Digital connectivity vital for Asia-Europe Meeting to advance - Born2Invest. Another regional alliance just might be in resurgence, thanks to digital connectivity. Forget for a minute the worries about the aftermath of a Brexit fallout in Europe, or a slowly rising excitement at the coming together of a more flexible Association of Southeast Asian Nations (ASEAN). This “international grouping” is the Asia-Europe Meeting (ASEM). If there are enough shared economic interests and political will between the nation-members from these two continents, then the last letter in that acronym just might change its meaning into “movement.”

The 11th ASEM Summit that took place last July in Ulan Bator, the capital city of Mongolia. Fintech firms continue to shape the banking world - Born2Invest. Fintech firms have changed the way that the banking world is doing business. After the expected initial resistance by these traditional establishments, some of them are adopting this nascent technology. WhatsApp rolls out video calling feature for over 1B users.