Cure without pills. Turning 27 and those that didn't make it - GQ Comment. From the GQ archive: To mark the untimely death of Amy Winehouse, we have republished from the GQ archive Adrian Deevoy's piece on why 27 is the most difficult year in anyone's life. 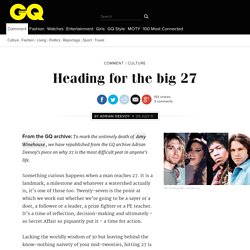 Something curious happens when a man reaches 27. It is a landmark, a milestone and whatever a watershed actually is, it's one of those too. Twenty-seven is the point at which we work out whether we're going to be a sayer or a doer, a follower or a leader, a prize fighter or a PE teacher. It's a time of reflection, decision-making and ultimately - as Secret Affair so piquantly put it - a time for action. Lacking the worldly wisdom of 30 but leaving behind the know-nothing naivety of your mid-twenties, hitting 27 is a defining moment. Like second puberty or a downpayment on a midlife crisis, 27 either drives men to greatness or leaves them curled at the food of the bed, sobbing and mumbling about their mothers. 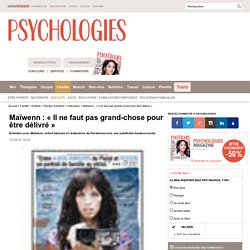 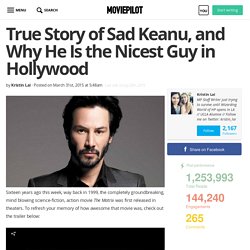 To refresh your memory of how awesome that movie was, check out the trailer below: After earning a staggering $463.5 million at the box office and being nominated for - and winning - four Academy Awards, the story of The Matrix is a rather happy one. But let's focus for a minute on the star of the franchise, Keanu Reeves. Sadly, at the age of 50 Keanu's life has been marred with more tragedy than most people would experience in twice that time. Despite the many setbacks that would have kept most people down, Keanu kept pushing. His father abandoned his family at a young age When Keanu was only three, his father left their family. He's surrounded by death In 1993, his best friend River Phoenix passed away after a drug overdose at the age of only 23.

Cara Delevingne - Women In The World Summit 2015 (Interview) Documentaire – Le stress : portrait d’un tueur > Sophrologie-actualite.fr, toute l actualité de la sophrologie. MARINA KAYE LYRICS - The Price I've Had To Pay. "The Price I've Had To Pay" Only the young and the innocent Are born with trusting souls When light is strong to nurture them By example of they know But I had to learn before my time That beneath your many masks Therein the darkness deep within I fell victim to your past And I have lost And you have taken And I have learnt The hardest way My heart is breaking My word is crashing to the floor The part you've taken Is not forgiving anymore And some would say That's the price I've had to pay I heard you release the demons Locked the door and eat the key With every blowing nightmare You may as well have been killing me I took it to the limit But you were never [?] 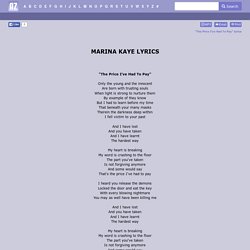 Forgiveness is earned Lessons are learned I was the weak one But I am stronger now So much stronger now And I have lost And you have taken And I have learnt The hardest way[x2] Visit www.azlyrics.com for these lyrics.