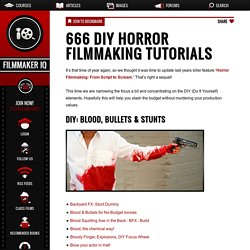 Rotoscoping with Vector Paint. Lately, I have been getting hired to “supercharge” sports footage. 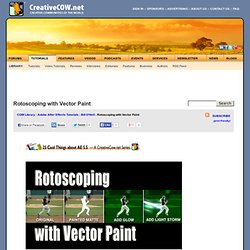 I create the spots for our IHL hockey team, The Chicago Wolves and while their budgets are narrow, hockey footage is plentiful. Each month I sift through their video game highlights and digitize the coolest clips for some digital frolics in After Effects. Much of this requires isolating the players from their backgrounds as a starting point for further embellishment. Midway Games invited me to assist with their new baseball game, “Slugfest”. As with my hockey treatments, I had to manipulate MLB highlights for their DVD game intro. In the project file, I have included the baseball runner clip but because of its size I have not included a Light Storm clip. Click to enlarge In a perfect world, the bat boy would be chasing the baseball players around the field holding an evenly lit green screen behind them.

Before any masking takes place you need to merge your fields together so you have hard progressive frames. Good. How to Create an audio particle spray effect in After Effects « After Effects. Building Your Own 3D Particle Generator. The effectiveness of these simulations depends, in large part, on the quality of the particles you use. 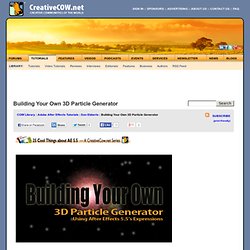 I encourage you to examine the ones that I've used in these examples and to try your hand at making your own and substituting them into one of the comps. For example, try replacing the snowflakes with autumn leaves. Or just invent some weird semi-transparent blob and see what it looks like in the fountain comp. Experiment. Have fun! Well, the meek among you are free to leave now. G=100; //gravity w=0; //wind wdir=0; //wind direction (0 = from left) vmin=500; //minimum initial velocity vmax=700; //maximum initial velocity amin=0; //minimum launch angle from vertical amax=110; //maximum launch angle from vertical d=4; //drag coefficient x=s*Math.sin(a)*Math.cos(r); y=-s*Math.cos(a); z=s*Math.sin(a)*Math.sin(r); Creating a spray can effect : Adobe After Effects basics.

I see what you mean. 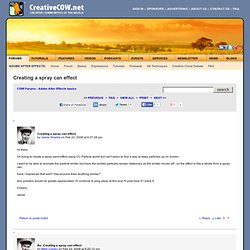 I really like Dan Ebbert's expression driven 3D particle generator, here: It does exactly what you want. In the downloaded aep, go to the comp named "Fountain". If you move the Null over time with keyframes, the particles stay where they should over their life, like a real spray can. You just need to come up with some particles of your own that look like paint spray, something simple, see his "specs" particle, or use a colored solid (Dan uses 128x128 particle) and use CC Ball Action on it, grid 0, then up the Scatter.

Animating Spray Paint and Stencil Effect in After Effects. So in this tutorial I’m going to show you how to create a spray paint effect using After Effects. 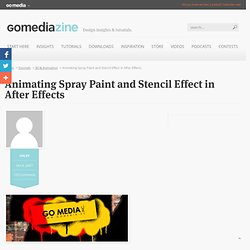 It’s a fairly simple process but I’ve got a few tricks that you may not have thought of. Here is a sample video of what you’ll be creating: Here are the AE project files. 40 Amazing After Effects Tutorials And Techniques. Do you want to learn how to create awesome after effects? 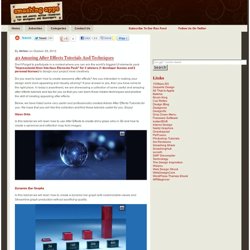 Are you interested in making your design work more appealing and visually alluring? If your answer is yes, then you have come to the right place. Old Poster Mock Up with Street Lighting. 35 Cool Adobe After Effects Templates. Adobe After Effects is an extremely powerful video special effects. 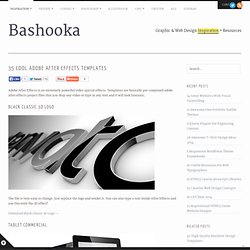 Templates are basically pre composed adobe after effects project files that you drop any video or type in any text and it will look fantastic. The file is very easy to change. Just replace the logo and render it. After Effects Tutorials, Plug-ins and Stock Footage for Post Production Professionals.  After Effects. Loopable background Posted on 19. 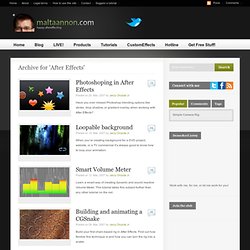 The Art and Science of Motion. Photoshop CS6 - Clean Professional Logo Tutorial. Light Streak After Effects Tutorial. Abstract Promo. About this template A fully customizable video display This elegant and abstract piece is perfect for a TV Promotion, video intro, coming next, or anything you want. 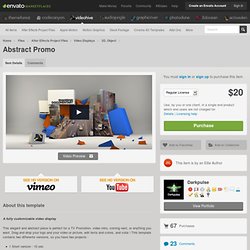 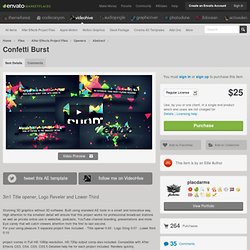 Built using standard AE tools in a smart and innovative way. High attention to the smallest detail will ensure that this project works for professional broadcast stations as well as private online use in websites, podcasts, YouTube channel branding, presentations and more. Eye candy that will catch viewers attention from the first to last second. After Effects Template - 3D Logo Animation. Softpk. Splatter Reveal.

Color up your corporate or personal logo with some animated paint splatters. Information: Exclusive splats footage from Rampant Design Tools included.Color picker for splatters.Easy customization.Video tutorial included.Audio not included but can be purchased here. Technical specifications: 1920×1080 HD. 16:9 Square Pixels.24 Frames Per Second.Adobe After Effects CS4 Project File. Item support: I take good care of my customers and offer free technical support for all of my items. Blocks - Broadcast channel pack. Hello folks! If you wanted a fresh look, clean and modern for your channel or tv show… this project is for you.

Also you can give multiple uses for the 12 items contained on this pack. I hope you like and find it useful. Features: After Effects CS4 or aboveFull HD resolution (1920×1080)No plugins neededYou can edit all with 11 controllersVideo tutorial included (10 min.)Very easy to customize Elements list: Royalty Free After Effects Templates! DropDrop.com! Royalty Free After Effects Project-Files. Creating Realistic Paint Effect in Realflow. After Effects Tutorials, Plug-ins and Stock Footage for Post Production Professionals. After Effects Tutorials, Plug-ins and Stock Footage for Post Production Professionals. I was playing around with Particular 2 and came up with this particle swirl using a couple of smoke images as particles. I love that Particular 2 reacts to the lighting as well as fake shading to make the particle seem more volumetric. Here is what I did, in Particular 2 custom particles are called Sprites, so once you select this as your particle type, the texture slot becomes available to use my smoke video that is included with the project download.

I stretched the particle area and rotated the world transform to make it look like a twister. I added a couple of lights to give it coloring and a BG gradient. Check out the screen shot for particle settings and my timeline. Download Project CS4 (Sorry but I sometimes forget to use CS3 so more people can open it but the smoke element is inside the Footage folder for you to experiment. ) Glossy Silver Web 2.0 Icon Tutorial. Here we’re going to create the Speech Bubble Icon from the Free Glossy Silver Icon set found on IconsETC. Create a new transparent document 512px by 512px st 72dpi. To create the comment bubble shape activate the text tool by typeing T, chose Webdings as your font, set it to 350pt, then type (^) as shown below.

Next double-click on the text layer you have just created to bring up the Layer Styles Dialog Box. Then apply the following layer styles: Now to create the gloss layer create a new layer by going to LAYER >> NEW >> LAYER in the menu and name the layer “Gloss”. After Effects Projects - Graphics - Adobe After Effects Templates and AEP Projects.

Flying through a tunnel in After Effects. If you look at the After Effects documentation for the "Polar Coordinates" filter, it says: "This effect distorts a layer by transposing each pixel in the layer's x, y coordinate system to the corresponding position in the polar coordinate system, or the reverse. " While this description is undoubtedly accurate, it's not really that descriptive or helpful. What would be much more effective would be something like "The Polar Coordinates filter can be used to simulate the effect of flying through a tunnel". In simple terms, the Polar Coordinates filter takes an image and re-positions pixels so that one which moves from the top to the bottom will now move from the center of the screen to the outside.

So if we create a texture which scrolls from the top of the screen to the bottom, the Polar Coordinates filter will remap it so the texture moves from the center of the screen to the outside – in other words, it will look like we're moving through a tunnel. Apply the fractal noise effect. Henrythejedi.com - Tutorials. After Effects CS5 rotobrush test. ‫أحبك - I Love You - After Effect light streak‬‎ Animated Handwriting in After Effects. Painting with light / Mit Licht malen - Trapcode Particular Tutorial [eng sub] Puppet Pin Animation - After Effects Video Tutorial. Animating a simple Character Head Rotation.