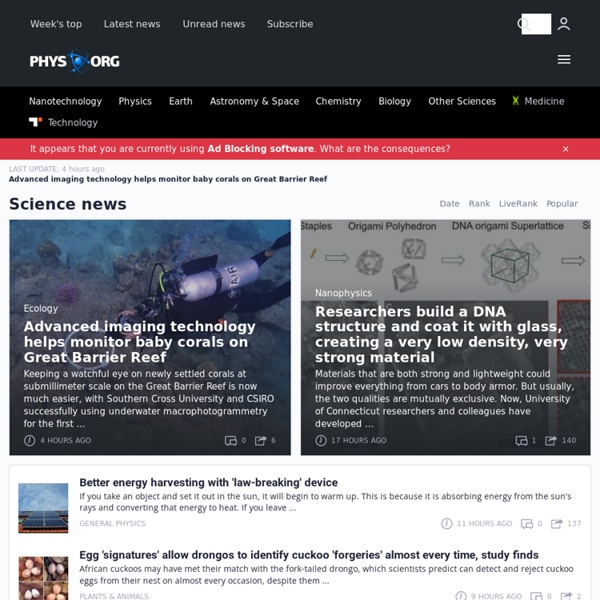 Alien-Like Skulls Unearthed In Mexico December 27, 2012 Image Caption: 300 Meters from the village of Onavas, archaeologists discovered a site with 25 human burials, 13 of whom have cranial deformation. This image shows cranial deformation in one of the human skulls. Credit: Cristina Garcia / INAH Elon Musk’s startup eyes human testing for brain-computer interface Elon Musk’s high-profile foray into connecting brains to computers, a 2-year-old company called Neuralink, detailed its ambitions and unveiled some initial results at a livestreamed event yesterday before an invitation-only crowd at the California Academy of Sciences in San Francisco. With thousands watching online, Musk, the entrepreneur behind Tesla and SpaceX, described the firm’s goal of using tiny electrodes implanted in the brain to “cure important diseases” and “achieve a symbiosis with artificial intelligence.” Details about those planned applications remain sparse, but Neuralink briefly presented some of its first rodent data from ultrasmall electrodes at the event. And in a seemingly spontaneous answer to a question, Musk revealed that the company has already used its device to allow a monkey to control a computer with its brain.

Future - Welcome to a home for the insatiably curious What is BBC Future? Well, for starters we are about so much more than making predictions. Our mission statement is simple: Artists, Physicists, Mathematicians and Philosophers Contemplate Infinity As I stepped into the Infinity Environment on Wednesday morning (Feb. 1), I heard faint gasps from those around me. With apprehension, we entered a stark white, brilliantly lit room with no edges. The curved walls and angled lighting minimized shadows, giving the illusion that we were staring into a continuum. Journal home : Nature Raphael Lis, Charles C. Karrasch, Michael G. Poulos, Balvir Kunar, David Redmond, Jose G. Barcia Duran, Chaitanya R. Badwe, William Schachterle, Michael Ginsberg, Jenny Xiang, Arash Rafii Tabrizi, Koji Shido, Zev Rosenwaks, Olivier Elemento, Nancy A. Speck, Jason M.

History of PSYOP Psychological Operations or PSYOP are planned operations to convey selected information and indicators to audiences to influence their emotions, motives, objective reasoning, and ultimately the behavior of organizations, groups, and individuals. Used in all aspects of war, it is a weapon whose effectiveness is limited only by the ingenuity of the commander using it. A proven winner in combat and peacetime, PSYOP is one of the oldest weapons in the arsenal of man. It is an important force protector/combat multiplier and a non-lethal weapons system. Psychological Operations (PSYOP) or Psychological Warfare (PSYWAR) is simply learning everything about your target enemy, their beliefs, likes, dislikes, strengths, weaknesses, and vulnerabilities. Once you know what motivates your target, you are ready to begin psychological operations.

ABOUT US Hi there! So here’s our story…. This is how it all started… From Newspapers, Magazines, Journals, Books to Websites, Blogs, Twitter Profiles and Quota accounts, we, just like the other youngsters, were attracted to the process of information assimilation and drawing conclusions based on those pieces of information. But, what was the impact of that consumption?

Researchers now able to stop, restart light By William J. Cromie Gazette Staff "Two years ago we slowed it down to 38 miles an hour; now we've been able to park it then bring it back up to full speed." Lene Hau isn't talking about a used motorbike, but about light – that ethereal, life-sustaining stuff that normally travels 93 million miles from the sun in about eight minutes. What's That Stuff? You might ask yourself... What's That Stuff? Ever wondered about what's really in hair coloring, Silly Putty, Cheese Wiz, artificial snow, or self-tanners?

These DIY Eco-Friendly "Air Conditioners" Are Cooling Down Bangladesh Out in the sticks of Bangladesh, the threat of flooding means that 70 percent of the population live in corrugated tin huts, most of which aren’t hooked up to an electricity supply. In the heat of the summer, this can practically turn these houses into ovens. However, a project called Eco-Cooler is spreading knowledge of a cheap and electricity-free method to cool down houses throughout Bangladesh. Is Dark Energy Really "Repulsive Gravity"? In 1998 scientists discovered that the universe is not only expanding but that its expansion is accelerating. This totally unexpected behavior has been called the "most profound problem" in physics , because our current understanding of gravity says that attractions between mass in the universe should be causing the expansion to slow down. The leading theory to explain the accelerating expansion is the existence of a hypothetical repulsive force called dark energy. (Related: "New Galaxy Maps to Help Find Dark Energy Proof?" )

Water, Oil and Gas, resource wars: the Stans of Central Asia « Law in Action Tajikistan's president, Emomali Rakhmon, likes things big. He has built the world’s tallest flagpole. Last year he opened the region’s largest library (with few books in it so far). Physics Flash Animations We have been increasingly using Flash animations for illustrating Physics content. This page provides access to those animations which may be of general interest. The animations will appear in a separate window. The animations are sorted by category, and the file size of each animation is included in the listing.