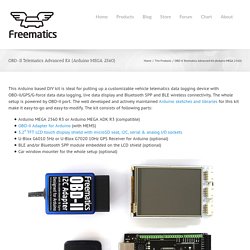 2.8'' TFT Touch Shield V2.0. Introduction This is a multifunctional Arduino/Seeeduino/Arduino Mega compatible resistive touch screen shield which can be used as display device, or sketch pad for user input/interface. 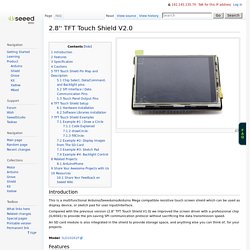 Compared with the previous version (2.8" TFT Touch Shield V1.0) we improved the screen driver with a professional chip (ILI9341) to provide the pin-saving SPI communication protocol without sacrificing the data transmission speed. An SD card module is also integrated in the shield to provide storage space, and anything else you can think of, for your projects. Model: SLD10261P Features Big, 2.8" 320x240 pixels, screen for a great easy to use and comfortable experience Micro SD card slot for file/image display.

Specification. Arduino serial UART scrolling display terminal using a 2.2" TFT. I have been making projects based around a 2.2" TFT display which uses the ILI9341 driver chip, this display can be connected to and controlled by an Arduino UNO. 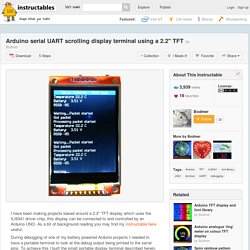 As a bit of background reading you may find my instructable here useful. During debugging of one of my battery powered Arduino projects I needed to have a portable terminal to look at the debug output being printed to the serial pins. To achieve this I built the small portable display terminal described herein. The unique part of this project is that the sketch uses the built in hardware scrolling feature of the ILI9341 chip, this takes the processing burden off the Arduino AVR microcontroller and means that the display can keep up with serial text messages at 9600 baud. The ILI9341 and GFX libraries featured in this instructable has been optimised for speed, some of the speed enhancing features use direct PORT access to the ATmega328 registers so it is important to use an Arduino board based on that processor chip.

Arduino TFT display and font library. This new library is a standalone library that contains the TFT driver as well as the graphics functions and fonts that were in the GFX library. 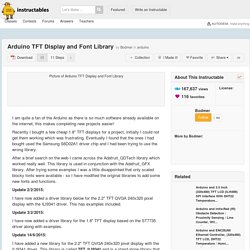 This library has significant performance improvements when used with an UNO (or ATmega328 based Arduino) and MEGA. Examples are included with the library, including graphics test programs. The example sketch TFT_Rainbow_one shows different ways of using the font support functions. This library now supports the "print" library so the formatting features of the "print" library can be used, for example to print to the TFT in Hexadecimal, for example: tft.println(57005, HEX); The larger fonts are now Run Length Encoded (RLE) so that they occupy less FLASH space, this frees up space for the rest of the sketch.

A new 72 point large Font 8 has been added that contains [space]1234567890:. characters. To use the F_AS_T performance option the ILI9341 based display must be connected to an UNO as follows: Spiro rainbow pattern generator. Stanleyhuangyc/MultiLCD. UTFT - Rinky-Dink Electronics. Basic functionality of this library was origianlly based on the demo-code provided by ITead studio (for the ITDB02 modules) and NKC Electronics (for the RGB GLCD module/shield). 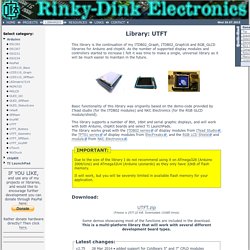 This library supports a number of 8bit, 16bit and serial graphic displays, and will work with both Arduino, chipKit boards and select TI LaunchPads.The library works great with the ITDB02 series of display modules from ITead Studio, the TFT01 series of display modules from ElecFreaks, and the RGB LCD Shield and module from NKC Electronics. Adafruit 2.8" TFT Touch Shield v2 - Capacitive or Resistive. Spice up your Arduino project with a beautiful large touchscreen display shield with built in microSD card connection. 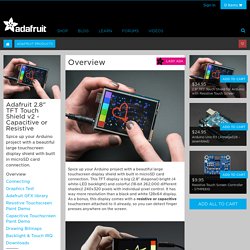 This TFT display is big (2.8" diagonal) bright (4 white-LED backlight) and colorful (18-bit 262,000 different shades)! 240x320 pixels with individual pixel control. It has way more resolution than a black and white 128x64 display. As a bonus, this display comes with a resistive or capacitive touchscreen attached to it already, so you can detect finger presses anywhere on the screen. Seeed-Studio/TFT_Touch_Shield_V2. UBX protocol help: configuring a NEO 6M Arduino GPS Module... Fletcher checksum? So I've been banging my head against my keyboard for a few days because I can't figure out how to get my new GPS shield to play nicely with my Teensy 3.1 (Arduino compatible) microcontroller.The GPS shield in question is iteaduino based, and can be seen here.I have no trouble using the TinyGPS Arduino Library to parse incoming data from the NEO 6 gps module on the Teensy's UART pins, and output latitude and longitude to my serial monitor in the Arduino IDE, as shown on the Teensy GPS page.The problem arises when I try to issue a NMEA command or a UBX command to the NEO 6. 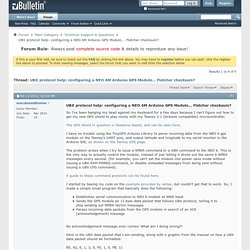 This is the only way to actually control the module, instead of just letting it drone out the same 6 NMEA messages every second. (for example, you can't set the module into power save mode without issuing a UBX RXM-PMREQ command, or disable unneeded messages from being sent without issuing a UBX CFG command). If anyone has any ideas, I would be ever so grateful! NeoGPS - configurable, ultra-small RAM footprint. After wrestling with the terrible NMEA protocol for the nth time in my career, and realizing how many Arduino libraries are so wasteful of RAM, I decided to write a fully configurable GPS library, NeoGPS. 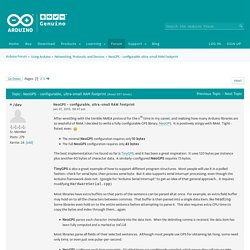 A similarly-configured NeoGPS requires 73 bytes. TinyGPS is also a great example of how to support different program structures. Most libraries have extra buffers so that parts of the sentence can be parsed all at once. SlashDevin/NeoGPS. Guides:ublox6 [UKHAS Wiki] Overview The uBLOX NEO-6Q/MAX-6Q are the sucessor to the uBLOX 5 module used in the Falcom FSA-03. 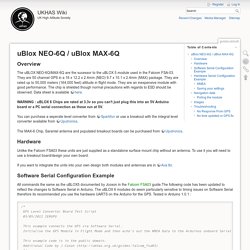