Nuclear Bomb in Babylon Cylindrical Seal (600 BCE) - Babylon Cylinder Seal from… Tracking Down the Mahabharata Nuclear Bomb Passage from "Chariots of the Gods" - Jason Colavito. Gods Of The New Millennium - 10. Sumer’s Sudden Downfall The mysterious beginning of civilization in Sumer, nearly six thousand years ago, was matched by its equally sudden and mysterious demise. 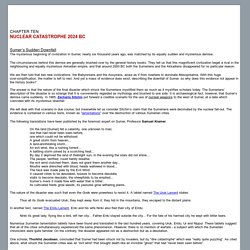 Mercury Retrograde In Virgo: Setting New Standards For Ourselves – Collective Evolution. The planet Mercury is now retrograde in Virgo. 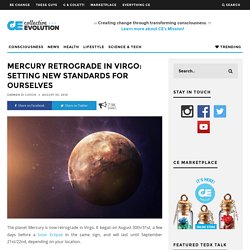 It began on August 30th/31st, a few days before a Solar Eclipse in the same sign, and will last until September 21st/22nd, depending on your location. From our perspective on Earth, it looks as if Mercury is going backwards because of the relationship between both Earth’s and Mercury’s orbit around the Sun. Accordingly, astrologers observe and interpret retrograde planets in a unique way compared to when they appear to be forward moving.

Retrogrades are recognized as a time when we are reworking how we orientate ourselves with the themes and energies of that specific planet in a specific sign. Food For Freedom. The Blue Ray - Channelings, Articles and more on Spirit Library. Indians of the Midwest. Ceremonial centers built by American Indians from about 2,200 to 1,600 years ago existed in what is now Ohio, Indiana, Illinois, Wisconsin, Minnesota, and Michigan, as well as elsewhere. 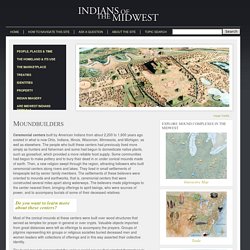 The people who built these centers had previously lived more simply as hunters and fisherman and some had begun to domesticate native plants, such as goosefoot, which provided a more reliable food supply. Some communities had begun to make pottery and to bury their dead in or under conical mounds made of earth. Then, a new religion swept through the region, attracting followers who built ceremonial centers along rivers and lakes. They lived in small settlements of kinspeople led by senior family members. 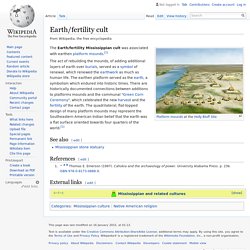 Earth/fertility cult. Sun cross. A sun cross (also solar cross, wheel cross) is the term for a symbol consisting of an equilateral cross inside a circle when considered as a solar symbol. 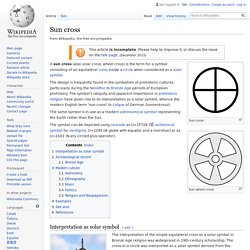 The design is frequently found in the symbolism of prehistoric cultures, particularly during the Neolithic to Bronze Age periods of European prehistory. The symbol's ubiquity and apparent importance in prehistoric religion have given rise to its interpretation as a solar symbol, whence the modern English term "sun cross" (a calque of German Sonnenkreuz). The symbol can be depicted in Unicode as U+2295 (⊕ globe with equator and a meridian). Venus. Physical characteristics Size comparison with Earth Venus is one of the four terrestrial planets in the Solar System, meaning that it is a rocky body like Earth. 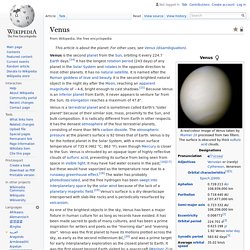 It is similar to Earth in size and mass, and is often described as Earth's "sister" or "twin".[21] The diameter of Venus is 12,092 km (only 650 km less than Earth's) and its mass is 81.5% of Earth's. Conditions on the Venusian surface differ radically from those on Earth because of its dense carbon dioxide atmosphere. Peregrine falcon. The peregrine's breeding range includes land regions from the Arctic tundra to the tropics. 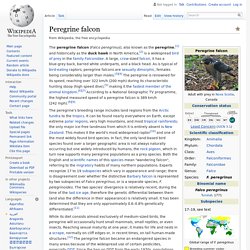 It can be found nearly everywhere on Earth, except extreme polar regions, very high mountains, and most tropical rainforests; the only major ice-free landmass from which it is entirely absent is New Zealand. This makes it the world's most widespread raptor[10] and one of the most widely found bird species. In fact, the only land-based bird species found over a larger geographic area is not always naturally occurring but one widely introduced by humans, the rock pigeon, which in turn now supports many peregrine populations as a prey species. Both the English and scientific names of this species mean "wandering falcon", referring to the migratory habits of many northern populations.

While its diet consists almost exclusively of medium-sized birds, the peregrine will occasionally hunt small mammals, small reptiles, or even insects. Underwater panther. An underwater panther, called Mishipeshu or Mishibijiw in Ojibwe (IPA: [mɪʃɪbɪʑɪw]), is one of the most important of several mythological water beings among many indigenous peoples of the Northeastern Woodlands and Great Lakes region, particularly among the Anishinaabe. 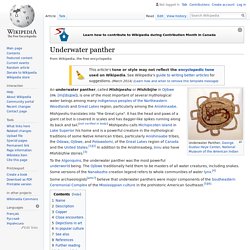 Mishipeshu translates into "the Great Lynx". It has the head and paws of a giant cat but is covered in scales and has dagger-like spikes running along its back and tail. [not verified in body] Mishipeshu calls Michipicoten Island in Lake Superior his home and is a powerful creature in the mythological traditions of some Native American tribes, particularly Anishinaabe tribes, the Odawa, Ojibwe, and Potawatomi, of the Great Lakes region of Canada and the United States.[1][2] In addition to the Anishinaabeg, Innu also have Mishibizhiw stories.[3] To the Algonquins, the underwater panther was the most powerful underworld being. 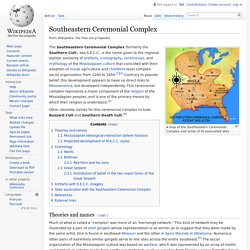 Their concept was of a complex of a specific cult manifestation that originated with Muskogean speakers in the southern United States.[8][9] Since then scholars have expanded the original definition, while using its trait lists as a foundation for critical analysis of the entire concept. In 1989 scholars proposed a more archaeologically based definition for the Mississippian artistic tradition.

Mississippian Ideological Interaction Sphere horizons[edit] Projected development of M.A.C.C. styles[edit] Southeastern Ceremonial Complex. Temple Mounds & Pyramids In The Americas. Ocmulgee National Park - Macon, Georgia This is the only underground earthlodge that has been rebuilt to date. 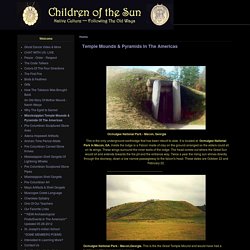 Chapter 2 Abraham leaves Ur to go to Canaan—Jehovah appears to him at Haran—All gospel blessings are promised to his seed and through his seed to all—He goes to Canaan and on to Egypt. Chapter 3. New Moon Magic - Illuminating the Solar Feminine « Dayna Seraye. Sisters, are you standing in your power? Many of us define the feminine as soft, passive, sweet, gentle, nurturing, receptive… But what about the Mama Lioness who fiercely protects her cubs?

What role does She — the strong, bold, vivacious, wild, liberated, independent, passionate, creative feminine — have to play? Sign Up for Empath Chat - Empath Chat. Womb of Light... The Work of Bethany Webster. Your Birthday – The Cards of Life. Life consists not in holding good cards but in playing those you hold well.~ Josh Billings (1856-1950) The day you were born is the day you stepped onto the world’s stage and the day your drama began. Your birthday was the first day that you started to experience the life your soul chose for you before you were born! Your birthday is governed by one of the 53 playing cards (52 plus the Joker). These cards represent personality archetypes, symbols of our personal expression, that reflect with amazing accuracy what the important elements of our life will be like.

When you study the meaning and significance of your Life Card, you will have some invaluable knowledge about yourself. Beyond self-understanding, these cards contain an uncannily accurate record or script of your entire life. The cards reveal your life’s plan—past, present and future. Five of Spades – The Cards of Life. New Beginnings Guatemala. Lakshmi Vishnu – Star Seed – Lightarian (TM) Rays Master-Practitioner – Reiki Kundalini Master-teacher – Spiritual Channeller – Lightworke. Lady Rowena by Glenyss Bourne. The Immensity of Being and the Higher Cosmic Rays. 10 Signs you are called to be a Western Shaman. 12:12. It may not surprise those of you who have put such loving commitment into Harmonic Convergence, or the 8:8 and 11:11 ceremonies to hear that 12:12 is the next step in spirit's divine plan. 12:12. ANGEL NUMBERS - Joanne Sacred Scribes: ANGEL NUMBER 1212. Morpheus, the Greek God of Dreams who delivered messages from the gods to the mortal world.