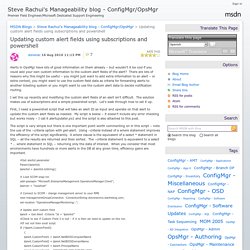 There are lots of reasons why this might be useful – you might just want to add extra information to an alert – or extra context, you might want to use the custom field data as criteria for forwarding alerts to another ticketing system or you might want to use the custom alert data to decide notification routing. I set this up recently and modifying the custom alert fields of an alert isn’t difficult. The solution makes use of subscriptions and a simple powershell script. Let’s walk through how to set it up. First, I need a powershell script that will take an alert ID as input and operate on that alert to update the custom alert fields as needed. The script is very simple but there is one important point worth commenting on in this script – note the use of the –criteria option with get-alert.

Updating custom alert fields using subscriptions and powershell - Steve Rachui's Manageability blog - ConfigMgr/OpsMgr. Tools. Here I would like to share some tools I have written. 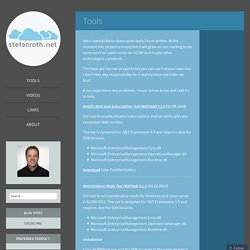 At the moment this section is empty but it will grow as I am starting to do some work on useful tools for SCOM and maybe other technologies / products. The tools are my own property but you can use it at your own risk. I don’t take any responsibility for it and try them out it the lab first! System Center Blog by José Rodas. Setting Up a Single-Server SCOM Server « windowsmasher. SCOM Agent Primary/Failover Management Server configuration tool - Mark Manty blog. Hi, Mark Manty Premier Field Engineer with Microsoft here with another example tool for System Center Operations Manager. 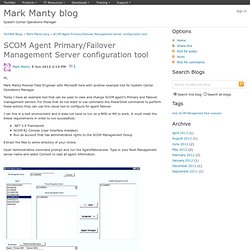 Today I have an example tool that can be used to view and change SCOM agent's Primary and Failover management servers. For those that do not want to use command line PowerShell commands to perform these actions they can use this visual tool to configure for agent failover. I ran this in a test environment and it does not have to run on a RMS or MS to work.

It must meet the below requirements in order to run successfully: .NET 3.5 FrameworkSCOM R2 Console (User Interface installed)Run as account that has administrative rights to the SCOM Management Group Extract the files to some directory of your choice. Open Administrative command prompt and run the AgentFailover.exe. Select an agent to view it's current configuration. OpsMgr R2 Web Console Web.Config settings - Michael Pearson's Blog. I’ve had lots of questions about what things can be controlled by the Web Console’s web.config settings. 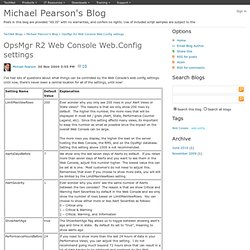 Until now, there’s never been a central location for all of the settings, until now! Now that we know what all of the settings, how do we change them? These settings must be added to the Web Console’s web.config. The web.config file can be found in the OpsMgr installation directory on the server hosting the Web Console, typically C:\Program Files\System Center Operations Manager 2007\Web Console on the RMS. It’s an XML configuration file that can be edited with any text or XML editor. Blogs. As may or may not have read on the MP Author website Microsoft has decided to partner with Silect to create a MP Authoring tool targeted to IT Pros. 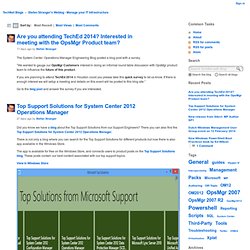 This tool is called MP Author and is completely free for all System Center Customers and will be the tool we recommend to IT Pros who need to do MP Authoring. It replaces previous tools we have piloted such as the Visio Authoring Tool which will be no longer recommended or supported. Software Prerequisites. Operations Manager 2012. EventLog Explorer - System Center: Operations Manager Engineering Team Blog. The Event Explorer tool can be useful for functional and exploratory testing and debugging. 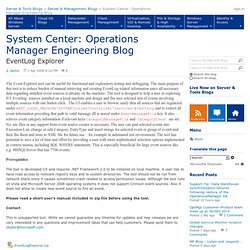 The main purpose of this tool is to reduce burden of manual retrieving and creating EventLog related information since all necessary data regarding installed event sources is already on the machine. The tool is designed to help a user in exploring NT Eventlog sources installed on a local machine and design and fire user selected sets of events involving multiple sources with one button click. Dude where is my Availability Report data from the SCOM DWH ?? ” Huston we got a problem!” 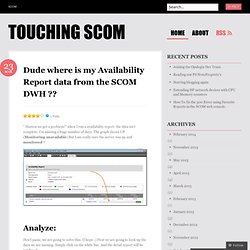 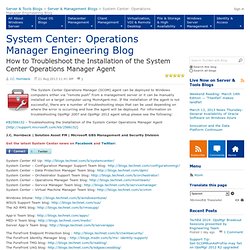 If the installation of the agent is not successful, there are a number of troubleshooting steps that can be used depending on where the error is occurring and how the agent will be deployed. For information on troubleshooting OpsMgr 2007 and OpsMgr 2012 agent setup please see the following: KB2566152 - Troubleshooting the Installation of the System Center Operations Manager Agent ( J.C. Hornbeck | Solution Asset PM | Microsoft GBS Management and Security Division. System Center: Operations Manager Engineering Team Blog. TechNet Remove a Management group from a SCOM 2012 agent with script.

Manipulating SCOM 2012 agent multihoming options by script. Last week I got a question from a friend in the System Center community, Adrian Chirtoc, about how to remove a management group entry from a multi-homed SCOM 2012 agent by using a script. 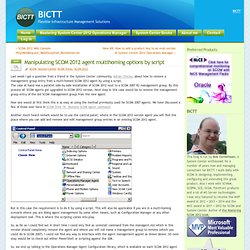 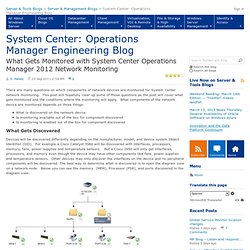 This post will hopefully clear up some of those questions as the post will cover what gets monitored and the conditions where the monitoring will apply. What components of the network device are monitored depends on three things: What is discovered on the network deviceIs monitoring available out of the box for component discovered Is monitoring is enabled out of the box for component discovered What Gets Discovered Devices will be discovered differently depending on the manufacturer, model, and device system Object Identifier (OID).

Interface Discovery Interfaces are not all discovered equally. Port 1 is able to be monitored using the standard MIBs. Interface 30 on the device is an example of an interface where performance counters will not be collected or monitored. How to configure the SCOM R2 Web Console to use SSL only. This posting will be all about how to configure the SCOM R2 Web Console to accept SSL connections only. For this posting I have used one of mine SCOM R2 test environments based on Windows Server 2008 R2 with an enterprise CA in place. The SCOM R2 Web Console installation uses Windows Authentication. Boris’s OpsMgr Tools – Updated - musc@> $daniele.work.ToString() Over the years, Boris has released a set of phenomenal tools, that saved lives of OpsMgr administrators quite some time in performing common OpsMgr tasks in OpsMgr 2007 and 2007 R2..

The sad news is that Boris has moved to another team within Microsoft. He has made a tremendous contribution over the years to the OpsMgr product, and I am sure he will rock on into his new role and team. At the same time he will be missed. In order to not let those tools go to waste, since I know many people use them, I have asked him to give me the code of his tools and allow me to update and maintain those tools going forward. And so I did: I updated a couple of his tools to work with OpsMgr 2012: All the above tools require the Operations Manager Console being installed on the machine where you run them, as well as the .NET framework 4.0.

From these views, you can use Health Explorer view to drill down and find out exactly which end point and which criteria were broken. Drilling into Base Page Result Details allows you see the exact status code returned: 401, Unauthorized. OM12 RC – Deploying agents with Powershell « System Center Operations Manager 2012. Home > OM12 Powershell, Operations Manager 2012 RC > OM12 RC – Deploying agents with Powershell In the help file for Install-SCOMAgent there are 4 examples for deploying agents.

I’ll describe the first two today. The first example will work in a small lab where the possibility of having admin rights on the OM12 system and the systems your deploying to is much more likely than in a production environment. The Server name should be in FQDN format or the get-scommanagementserver cmdlet will not return a value. While the agent is being deployed the Operations Manager Shell will only run that command till the agent install is completed, which should only take a few minutes to complete. Cameron Fuller - How does the failover process work in OpsMgr 2012? (#SCOM, #SYSCTR)

This is an older troubleshooting article that was originally posted on our old SMS&MOM blog back in July of 2008 but since we still get a few calls on this I thought it was worth repeating here. If you need to troubleshoot console performance in System Center Operation Manager 2007 then this is the place to start. I've been getting a few questions lately about slow performance with the console so I thought a post might be in order. Luckily for me, Tim Helton, one of our top Support Escalation Engineers, had already written some great tips that he uses to troubleshoot these kinds of issues.

His notes are below: These are some steps that have helped me troubleshoot console and general performance issues in OpsMgr SP1. SQL Performance: Most console performance issues stem from poor SQL performance. The OperationsManager Database should be on its own dedicated server - No other databases should live on this SQL server. OpsMgr Blog by José Rodas. Kevin Holman's System Center Blog. OpsMgr 2012: Cumulative Update Rollup 1 (UR1) ships–and my experience installing it - Kevin Holman's System Center Blog. Cumulative Update Rollup 1 (UR1) for OpsMgr 2012 has shipped. Jimmy Harper's Operations Manager Blog.