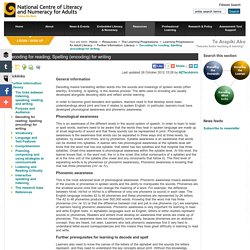 Encoding, or spelling, is the reverse process. The skills used in encoding are usually developed alongside decoding skills and reflect similar learning. In order to become good decoders and spellers, learners need to first develop some basic understandings about print and how it relates to spoken English. In particular, learners must have developed phonological awareness and phonemic awareness. Phonological awareness This is an awareness of the different levels in the sound system of speech. Phonemic awareness This is the most advanced level of phonological awareness. Further prerequisites for learning to decode and spell Learners also need to know the names of the letters of the alphabet and the sounds the letters represent, and they need to understand the key concepts about print.

The alphabetic principle. Read with Understanding: Decoding progression. Spell to Write and Read. 30 Incorrectly Used Words That Can Make You Look Bad. While I like to think I know a little about business writing, I often fall into a few word traps. 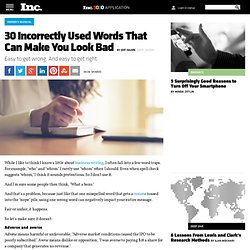 For example, "who" and "whom. " I rarely use "whom" when I should. Even when spell check suggests "whom," I think it sounds pretentious. So I don't use it. And I'm sure some people then think, "What a bozo. " And that's a problem, because just like that one misspelled word that gets a resumé tossed into the "nope" pile, using one wrong word can negatively impact your entire message.

Fair or unfair, it happens. So let's make sure it doesn't: Adverse and averse Adverse means harmful or unfavorable; "Adverse market conditions caused the IPO to be poorly subscribed. " But you can feel free to have an aversion to adverse conditions. Affect and effect Verbs first. As for nouns, effect is almost always correct; "Once he was fired he was given twenty minutes to gather his personal effects. " Thinking in a Foreign Language: How to Do It and Why. Thinking in a foreign language is an important step in the long road that is fluency in a foreign language, but it’s a step that, for some reason, many language learners tend to ignore. 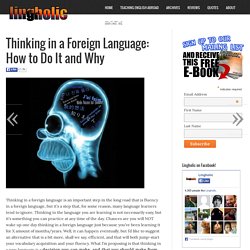 Thinking in the language you are learning is not necessarily easy, but it’s something you can practice at any time of the day. Chances are you will NOT wake up one day thinking in a foreign language just because you’ve been learning it for X amount of months/years. Well, it can happen eventually, but I’d like to suggest an alternative that is a bit more, shall we say, efficient, and that will both jump-start your vocabulary acquisition and your fluency.

What I’m proposing is that thinking in a new language is a decision you can make, and that you should make from Day 1. Why Would I Do It? You might be wondering why anyone would go through the discomfort of trying to think in a foreign language, especially during the early stages or learning. How Do I Do It? Making the Language a Part of Your Life. Prism. Prism is a tool for "crowdsourcing interpretation. 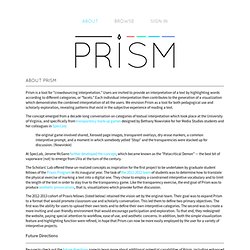 " Users are invited to provide an interpretation of a text by highlighting words according to different categories, or "facets. " Each individual interpretation then contributes to the generation of a visualization which demonstrates the combined interpretation of all the users. We envision Prism as a tool for both pedagogical use and scholarly exploration, revealing patterns that exist in the subjective experience of reading a text. The concept emerged from a decade-long conversation on categories of textual interpretation which took place at the University of Virginia, and specifically from transparency mark-up games designed by Bethany Nowviskie for her Media Studies students and her colleagues in SpecLab: the original game involved shared, Xeroxed page images, transparent overlays, dry-erase markers, a common interpretive prompt, and a moment in which somebody yelled ‘Stop!’ Future Directions 2012-13 Contributors Shane Lin Claire Maiers.