30 Incorrectly Used Words That Can Make You Look Bad 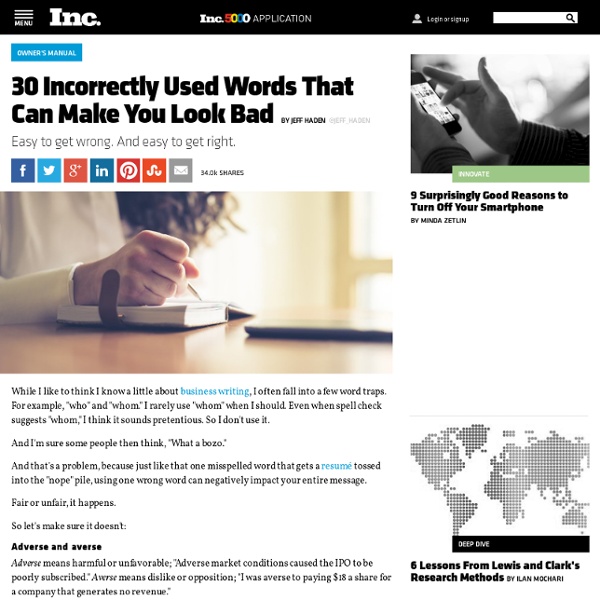 While I like to think I know a little about business writing, I often fall into a few word traps. For example, "who" and "whom." I rarely use "whom" when I should. Even when spell check suggests "whom," I think it sounds pretentious. So I don't use it. And I'm sure some people then think, "What a bozo." And that's a problem, because just like that one misspelled word that gets a resumé tossed into the "nope" pile, using one wrong word can negatively impact your entire message. Fair or unfair, it happens. So let's make sure it doesn't: Adverse and averse Adverse means harmful or unfavorable; "Adverse market conditions caused the IPO to be poorly subscribed." But you can feel free to have an aversion to adverse conditions. Affect and effect Verbs first. As for nouns, effect is almost always correct; "Once he was fired he was given twenty minutes to gather his personal effects." Compliment and complement Compliment is to say something nice. For which I may decide to compliment you. (Seriously.

100 Not-Boring Writing Prompts for Middle- and High Schoolers 1. Attach an image (photo, magazine, etc.) to a notebook page and write about it. 2. What things will people in the future say about how we live now? Bill Murray on storytelling If you are any kind of fan of Bill Murray at all, then you will enjoy this interview he did with Howard Stern last week. Murray, who is famously hard to get a hold of, does not do a lot of interviews like this, so it was a rare treat. It's not a performance. This is just two guys talking, but there are some gems in there and even a few bits relevant for presenters and speakers of all types. You can listen to the audio here, but I highlight two of the more relevant points for presenters below. On story and storytellingAt 18:55 in the audo track above Howard asks Bill how it is that he makes people laugh?

45 ways to avoid using the word 'very' A posthaven user upvoted this post. — habebaakiar 3 years ago — barcahaters 3 years ago — Jan Arzooman 3 years ago — Y.Babadogan 3 years ago A Practical Guide To Critical Thinking A Practical Guide To Critical Thinking By Greg R. Haskins 20 Common Grammar Mistakes That (Almost) Everyone Makes I’ve edited a monthly magazine for more than six years, and it’s a job that’s come with more frustration than reward. If there’s one thing I am grateful for — and it sure isn’t the pay — it’s that my work has allowed endless time to hone my craft to Louis Skolnick levels of grammar geekery. As someone who slings red ink for a living, let me tell you: grammar is an ultra-micro component in the larger picture; it lies somewhere in the final steps of the editing trail; and as such it’s an overrated quasi-irrelevancy in the creative process, perpetuated into importance primarily by bitter nerds who accumulate tweed jackets and crippling inferiority complexes. But experience has also taught me that readers, for better or worse, will approach your work with a jaundiced eye and an itch to judge. While your grammar shouldn’t be a reflection of your creative powers or writing abilities, let’s face it — it usually is. Who and Whom

What I Learned Writing Dreamlander: 6 Types of Courageous Characters What’s the secret to creating characters readers love? There must be a secret, right? Some magic formula that will make readers fall as madly in love with our characters as we have with other writers’ larger-than-life heroes and heroines. You’re probably thinking I’m going to say, “Sorry, but no, there’s no magic formula. Just hard work and luck.” But, actually, that’s not so. 5 Ways to Get Rid of Your Damn Empty Modifiers I discussed the need to get rid of empty emphatics when I gave you 8 words to seek and destroy in your writing, but just saying that you should get rid of a thing doesn't say much about the right way to do so. Today I'm going to show you a few of my favorite ways to get rid of your empty modifiers. What exactly is an empty modifier? It's any word whose only role is to intensify the word it's modifying. The prime candidates here are "very" and "really," but "extremely," "intensely," "totally," "absolutely," "quite," and many other emphatic modifiers make the list. Further, many emphatics that shift meaning slightly or add some flavor (e.g., "just" or "damn") should be approached with skepticism, and it's easy to find flimsy "-ly" words that show us why the road to hell is paved with adverbs.

Writepop - Science fiction stories, humor, and writing about writing A thousand lifetimes in space – Living on a generation ship 1,000 human beings are selected to board a spaceship headed for the stars. The trip is so long that they will die in space, but their descendants will reach a new planet. To save room on the generation ship, the original population of the ship is all women, with children to be produced by artificial insemination. The first “in-space” generation grows up in a society controlled by women.Variation – To save space on the generation ship, all the original passengers are female. All the children are produced by artificial insemination, all from female embryos.

The Sixteen Personality Types - High-Level ISTJ - The Duty Fulfiller Serious and quiet, interested in security and peaceful living. Extremely thorough, responsible, and dependable. Well-developed powers of concentration. Geography of the UK The official title of the UK is the United Kingdom of Great Britain and Northern Ireland . Great Britain (the formerly separate realms of England and Scotland, and the principality of Wales. ) Northern Ireland (also known as Ulster) Numerous smaller islands including the Isle of Wight, Anglesey, and the Scilly, Orkney, Shetland, and Hebridean archipelagos. The UK is an island nation in Western Europe just off the coast of France. The mainland areas lie between latitudes 49°N and 59°N and longitudes 8°W to 2°E. The UK lies between the North Atlantic Ocean and the North Sea, and comes within 35 km (22 miles) of the northwest coast of France, from which it is separated by the English Channel.

45 ways to avoid using the word 'very' Three Telling Quotes About ‘Very’ Substitute ‘damn’ every time you’re inclined to write ‘very;’ your editor will delete it and the writing will be just as it should be. ~Mark Twain‘Very’ is the most useless word in the English language and can always come out. More than useless, it is treacherous because it invariably weakens what it is intended to strengthen.