This Farm of the Future Uses No Soil and 95% Less Water. WATCH: An enormous garden on top of a... - We Only Have One Earth. Indoor gardening with hydroponics. Kräuter Garten by INFARM @ METRO Cash & Carry Deutschland (Full Version) The only way is up: Vertical farming in Kyoto.

While it doesn't generally get too cold in this part of Japan, the temperature drops enough to halt crop farming for four to five months. 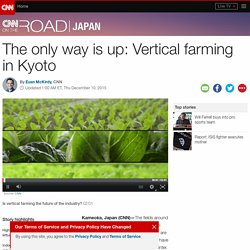 Inside the doors of the eerily high-tech facility it's business as usual, as masked workers glide around quietly but purposefully. They'll see 21,000 heads of lettuce shipped out across the length and breadth of Japan today, all delivered to supermarkets and restaurants within 24 hours of leaving the doors of this vertical farm. They'll see a further 21,000 the following day, and the day after that too -- 7.7 million a year in fact. Spread is Japan's largest vertical farm, a unique blend of agriculture and industry, and its Kameoka factory grows and ships out produce -- for now four varieties of lettuce but potentially any kind of leafy vegetable -- year-round.

The company is set to more than double its output with the opening of another western Japanese site early in 2016. Insider guide: Best of Kyoto Growing time, from seed to harvest, is a lean 40 days. Vertical farming: The next big thing for food—and tech. As a concept, vertical farming has been around for decades, and thinkers like Columbia professor Dickson Despommier are credited with advancing the concept. 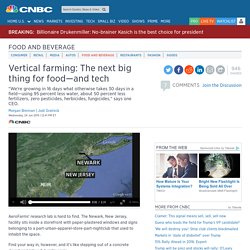 Until recently, however, it was never economically viable. Even now, the concept has major drawbacks. It's capital-intensive to start a vertical farm, energy costs can run very high, and space constraints limit what can be grown. Due to the lack of soil, the produce also doesn't get an organic label—even though it costs consumers about as much as organic products do. 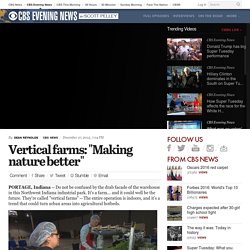 It's a farm... and it could well be the future. They're called "vertical farms" -- The entire operation is indoors, and it's a trend that could turn urban areas into agricultural hotbeds. You'll find arugula and parsley, basil, kale and other greens that grace our plates. "We are growing nine varieties of lettuces,'' said Robert Colangelo, the founder of Green Sense Farms. Or you could call him Mr. "I guess. This is how he does it, with a pink light from a light-emitting diode, or LED "It gives you a very concentrated amount of light and burns much cooler. No sun? Researchers believe plants respond best to the blue and red colors of the spectrum, so the densely-packed plants are bathed in a pink and purple haze.

"We take weather out of the equation," says Colangelo. This abundance keeps the prices consistent year-round at local groceries. © 2014 CBS Interactive Inc. FarmedHere, Nation's Largest Indoor Vertical Farm, Opens In Chicago Area (PHOTOS) Occupying 90,000 square feet of a formerly abandoned suburban Chicago warehouse, FarmedHere is not only the first indoor vertical farm of its kind in the nation -- it's also the largest. 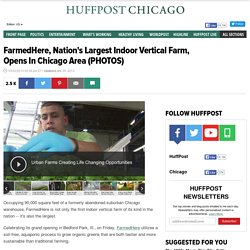 Celebrating its grand opening in Bedford Park, Ill., on Friday, FarmedHere utilizes a soil-free, aquaponic process to grow organic greens that are both tastier and more sustainable than traditional farming. Here's how it works: Plants are grown in beds stacked as much as six high by using a mineral-rich water solution which is derived from tanks of hormone-free tilapia offering up nutrients to the plants in a controlled environment that ensures optimal growing. (Peek inside the Chicago-area facility below.) The facility hopes to produce an anticipated 1 million pounds of chemical-, herbicide- and pesticide-free leafy greens -- including basil, arugula, mints and other greens -- to the Chicago area once it hits full production.